Camping with a Toddler - Volume 1

The weekend of June 12 - 14 we went on a family camping trip - our first, to be honest. We went to Gifford Pinchot State Park in Pennsylvania, which is, interestingly enough, one of the largest camp grounds in the country...or something like that. We chose the location because Michael was doing a photo shoot of some friends' new baby, and they live near the area.

First off, I would highly recommend this camping location to families of all sizes and ages, as the amenities are good, the price is right ($25/night for a tent site), and the bathhouses are clean. The people at the gate were very helpful and very friendly and there were several privately owned firewood booths in driveways in both directions outside the park. Firewood ran $4.00 a bundle for sustainable logs or $2.00 a bundle for kindling. We bought a few of these.

First note - bring a pack n play for your toddler.

Maeryn is 13 months old and extremely active, even for a little girl her age. She loves to run, play, climb, and get into trouble. Without the pack n play, tenting was something of a disaster. While she went to sleep in the tent Friday night, she woke up around 2 AM and decided it was time to play. It was very exciting that the whole family was right there next to her. Michael was a martyr and took her into the back of the Caravan. She played. He dozed off and on. She finally went back to sleep around 5 AM. To say the least, Michael was a tired guy the next day.

The second night, Saturday, we stayed up late roasting marshmallows and downing s'mores. We put Maeryn in the back of the van immediately. She didn't take the bait and wasn't at all interested in snoozing. So..in the end, we decided at around 8:30 PM (which was staying up late for Jonah), we would simply pack up and head home.

I guess my first word of wisdom when it comes to camping with toddlers is, be prepared to pack up and go home. There's no reason to make you and your other children AND your toddler miserable. Just hop in the car and start driving. Wawa has great coffee and Mountain Dew to keep your gears turning til you pull up to your house.

Other than the sleeping issues, all agreed that it was most likely the best time we have ever had as a family.

When we arrived on Friday, we drove around for about 1/2 hour checking out all of the open tent sites. The staff handed us a map and some site numbers (for about seventy sites that were unoccupied that were appropriate for tent camping - there were also many RV hook-up sites for those of you with an RV) and we headed out to find the perfect spot. After we found it and notified the gate staff of our choice, they handed us a label for the site post (where the site number is located) and we slipped it into the holder. The site was ours!

We set up camp and went straight to bed.

Saturday morning we got up and hit the local grocery store for food for the day. We had already packed two coolers (small ones) with ice (next time, we will also purchase gallons of water instead of refilling our bottles over and over at the bathhouse spigot). We grabbed bagels and cream cheese along with a bunch of bananas for the van ride to our friends' for the photoshoot. We hung out for about two hours while Michael snapped pictures, and then we headed back to camp.

Lunch was sandwiches back in the Caravan as we headed for our home away from home at Gifford Pinchot.

We took a family trek around the campsite to see what there was to see, bought some firewood for our planned dinner of pizza mountain pies, and changed into our swimming gear to hit the lake.

The beach does not have a lifeguard so we needed to keep a very close eye on the kids. Jonah played on the playground for a long stretch until Michael and I convinced him to get in the water. Once he did, he put his head under for the first time of his own volition (last time was a not so great experience with a swim instructor and a hula hoop - but that's a story for another time). He was SO proud of himself. We played water games as a family for hours and Jonah continued to kindle his love for the wet stuff.

After swimming we all took showers - I took Maeryn into the shower with me. I kept my bathing suit on while she held onto me, naked, like a little monkey and I washed her body with a washcloth. Jonah showerd with Michael. I wrapped her in a towel and we headed back to our tent site. She managed a short nap in the tent while we prepared the camp fire for dinner and broke out the pie irons (I would suggest an investment in good mountain pie irons if you plan to camp as a family and eat over a fire - you can make a variety of sandwiches for all occasions, plus delicious desserts for snacks). Jonah had four sandwiches. I've never seen him so hungry!

When Maeryn woke she picked at a sandwich. We then took a family hike around the camp site, checked out the amphitheatre and the other camp sites and bathhouses, and headed back to the campfire for s'mores.

It was about an hour after our s'more party began that we tried to put Maeryn to bed, to no avail, and we bailed and headed for home. We decided that regardless of our toddler sleeping at night (and we hope to remedy this next time with the pack n play), we had had an amazing family experience that we would love to repeat many times in the future. 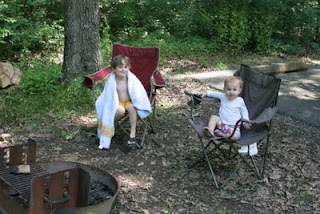