Beach Excursions OR Why I Hate Seagulls with Fiery Passionate Hatred.

Last night we went to Chuck E. Cheese.  We took no pictures.  Maeryn hit the jackpot on the same game twice.  Jonah was not exactly happy about this.  She won over 400 tickets.  At one game.  The workers watched with... let's say intense interest.  She also took advantage of the "Follow me to Free Tickets" dance program offered by Chuck E. himself.  This resulted in "tickets raining down from the sky" and free for all ruckus ensued.

Maeryn is awesome and gave her brother 279 of her over 400 tickets.  He felt much better after this, and both returned home with significant spoils.  We also rented movies from RedBox.  For the second night in a row.  It was, and has always been, worth every penny of every $1.27 we spent.

We are discussing beach excursions and my hatred for seagulls.

My hatred began when I was but a wee lass (12 or something) at a beach that shall remain unnamed that may or may not exists somewhere between Maryland and Virginia on the eastern seaboard.  I was accompanied by my parents and some relatives who shall also remain nameless (to protect them from any seagull who may be reading this at this very moment) and I was eating a ham sandwich.  This was before my vegetarianism kicked in and I was just a regular old omnivore.  And the seagulls came.

They circled, they dove, they spoke horrible words from their hooked and razor sharp beak appendages and I knew they were after me particularly.  I knew, because they had already pooped on my cousin.  They pooped on her leg.  It was vicious, but it was a mere warning.

I was the one with the ham sandwich.

But they did.  They did dare.  One seagull dove and snatched my sandwich from my hand, scraping my fingers with the knife-like beak as it pilfered its prize.  It split the goods with it's compadres.  They ate it voraciously.  They honked and guffawed at my folly...

And each time I have been to the beach, I know all of the seagulls have received the message:  I am the target.  I am the one.

Last year my family celebrated Thanksgiving in Ocean City, Maryland with a fire on the beach.  I thought in November it would be safe to consume food on the beach.  Of course this was ridiculous.  Because it's me.  And they know.

They swooped and dove and Michael almost had to kill them.

I know I make light of it, but it really is sort of terrifying.  And Hitchcockian...  But mostly terrifying.

So today as I packed lunches for my children, I realized that we were going into a war zone.  I prepared them for battle.  We brought cloth napkins.  We were ready to hide our food.  We were ready to dash to the car if necessary. 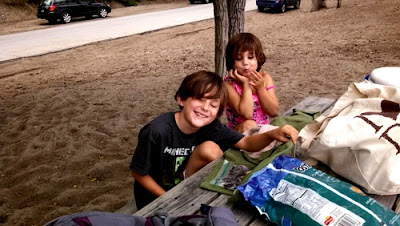 We made it through the picnic relatively unscathed - though a robin threatened us several times with its haughty red-breasted fury-ness.  We emerged victorious.

And then we moved out onto the beach proper.

And Maeryn brought with her some bread crumbs. 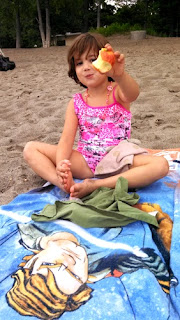 And they saw them.

I refuse to pass on this horrible thing to my only female offspring.

As they birds began to swoop, we buried the evidence.  The crumbs disappeared.  The birds were left dumb-founded.  We were the conquerers of all!  The masters of the beach proper!  We defeated the doomsday minions once and for all!

And God saw that it was good. 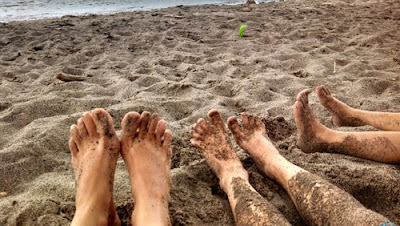 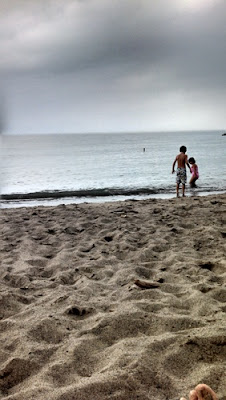 On a vacation in California, Maliea said her first bad word. She was three. Right after the seagulls swooped down and stole her chicken. "That damn seagull!"
We didn't correct her or anything, 'cause she was right.