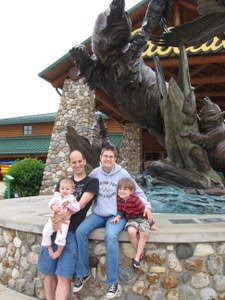 This is somewhat insane.

My son is going fishing with my dad tomorrow morning.

We're in PA hanging out with my parents for the Fourth of July weekend.

I'm glad we came, even though I'm super stressed because I've overbooked myself - as is my usual M.O. I'm working on it though, really I am. Sarcasm is implied, but I really am working on it!

Today was a crazy day. I'm totally fried - should be sleeping about three hours ago according to my current level of tired. We went to South Park (near my parents' house) to the Wild Game Preserve and Jonah got to feed the ducks, well...the carp. We only had Animal Crackers, not bread, and the ducks weren't interested, but the carp were totally into anything new, it seemed, and new was not bread. We also got to see a turtle and several buffalo kept in the preserve. Very cool park. If anyone is ever in the South Pittsburgh area, check out South Park. Tons of bike and ped trails, wild game preserve, wave pool, kids' pool, easy hiking, several ponds and picnic areas, playgrounds, go-carts, and more. Very cool place. Also a huge sledding hill open in winter to anyone and everyone with a sled and some courage - the hill is pretty wicked looking.

After South Park we checked into BK for veggie burger meals for the hubby and me and chicken + a burger for the respective kids. Dad came and grabbed a Whopper. After Mom got home from work we headed out to Cabelas. Dad has a bunch of free money from using his Cabelas cerdit card - so he told everyone to grab anything they wanted under 50 bucks. I got some zip-off cargo pants - I've wanted them FOREVER. They are pretty nice - summer only - super light weight and rain resistant. Lots of huge pockets. I'll need to get another pair for winter, but anything I don't have to pay for is GREAT. Michael will have to hem them for me. Everything Cabelas comes unhemmed. I don't sew. Michael does. A regular tailor, he is.

After that we headed to Cracker Barrell and grabbed some chow. I got the veggie plate - so did Michael and Maeryn. Jonah got chicken and fries. It's tough to get the little guy to eat his veggies. Good food all around. Jonah and Dad played checkers awhile. Good times.

I was beat when we got home. Totally didn't go for a run with Michael even though I really should have - kind of hoping for a ride tomorrow morning..

So why am I still awake?

The Tour de France: A Look Back - is on Versus. Michael is the cycling guy in our family, but I'm working on my own title as at least cycling chick...
Hope everyone gets outside tomorrow for the 4th! If you get the station, tune in to the Tour de France!
Posted by Missy at 8:38 PM