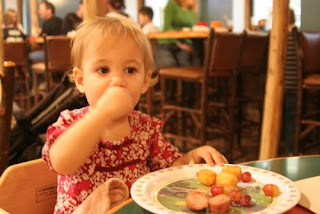 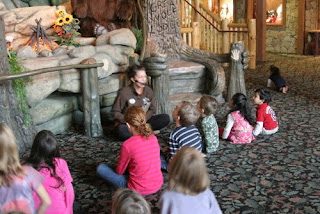 Following our stay at Great Wolf Lodge, which ended with an awesome day at breakfast at the Lodge, Kids' Wolf Walk (which was eh in my book, but Jonah seemed to have fun in spite of us losing his origami wolf after the event), morning storytime, and another quick trip to the waterpark to take some photos and ride our favorites one more time, we headed to Michael's parents' for a free overnight stay on the way to Philadelphia.

Our original intent was to sleep at their house, then spend the following day in Philly with them, leave Maeryn with them, and take Jonah to NYC as a special excursion with our oldest to see the NYC sites and catch Mary Poppins on Broadway... but it was not to be, as both grandparents had to work, so Maeryn came along for the entire event.

We took the train from Michael's parents' to 30th Street Station in Philadelphia, which was a quick ride. Michael and I are very fond of Philly and have visited often, so it's a comfortable stomping grounds for our family. We checked into our hotel on the Ben Franklin parkway and headed out to the Franklin Institute to check out the enormous heart replica (large enough to pump for the Statue of Liberty), some real brains, heart surgery, the planetarium, and several other things at the Institute. I have to admit, I was not as impressed as I'd hoped to be with the place. While there were some neat exhibits, there were also some not so neat ones. They had games and scavenger hunts throughout the building for kids, but they weren't evident until you were halfway through the stations at times, and so the games were lost. There was no one explaining or handing things out, and there was a lot of construction going on in all areas of the institute. The kids' only section is very cool looking, but way too small for the amount of children coming through the place. Jonah would have done VERY well if it was just us and him, but with Maeryn it was sort of a painful experience. It is definitely catered to older kids or gifted kids like Jonah who are VERY into science. Maeryn was mostly bored. She played in the kids' area, but wanted to strip down to her diaper and climb into the water tables, so that didn't work out so well. 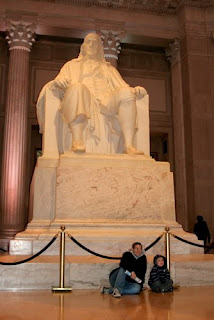 We did NOT do well with eating in Philly. We went to TGI Fridays - we knew better, but were starving and it was close to our hotel (which was VERY nice and VERY reasonable - Windsor Suites Philly - highly recommend it for the thrifty family looking for a spacious room - complete with FULL kitchen and huge closets - we used one as Maeryn's room) and we ordered pizza from two places - long story short - if they person taking your order doesn't speak English, seriously consider calling another place, unless you can speak their language as well. I recommend Jake's if you're staying near Center City, and I'm leaving it at that. We had pizza for dinner and then for breakfast.

I must say that Philly is a great city to take your kids. People were extraordinarily helpful - two women helped us carry Maeryn in the stroller and our bags down stairs at the subway station, everyone held doors and told us our kids were cute, and no one was annoyed on the subway when they were a little crazy. Also - the streets are wide with large sidewalks and it is never as crowded as New York.

At 30th Street as we waited for our train to NYC, I went to buy an Auntie Anne's pretzel with caramel sauce. It was $3.90. I only had 2.53 in change. The woman told me not to worry about it and gave me my pretzel for what I had to give her. It restored a little of my faith in humanity.
Posted by Missy at 3:15 PM