Beach Adventure with the Little.

In case you were wondering - the Little is my daughter, Maeryn, and yesterday I decided that it was simply too nice to stay inside and work through the laundry pile, read books, and watch Elmo.  It was time for another Mother-Daughter Adventure.

So we headed out to the public beach.  This particular beach is a park, and it is free to go there, unlike many of the other parks including beaches in the area.  There is no fee, and it includes hiking trails and beautiful scenery, complete with a view of the "scary bridge" (those of  you who live in the area know EXACTLY what I'm talking about here).

It was a REALLY nice time.

I prepared her before we even got out of the car:

"Maeryn, we are going to the beach."

"You are to stay out of the water.  If you go in the water, we will be going home."

So...I took a deep breath, knowing that the past few times we've gone to the beach she has NOT listened to me and has come home soaking wet and largely upset that she can't wade in over her head and bob along in the waves while I frantically try to rescue my under-two non-swimmer from drowning.

It ended up so beautifully.  I couldn't have asked for a better experience.

The park was empty, save a few pick-up trucks (which is always alarming to me - I expect predators to jump unexpectedly out of the reeds and attack me) that seemed to contain no one.  We did have a little scare when three dogs bounded out of the woods and into the water without an owner, but a little woman came following after a few minutes later, so all was well, and the dogs were huge, but friendly.

We walked all along the beach, tossing pebbles into the water, writing letters in the sand, and checking out the driftwood.  We hiked a little in the woods and made a trampoline from a fallen log and took in the landscape: the dock, the water, the bridge, the pretty purple flowers... We came across some tires that had washed onto the beach.  There were about twenty of them.  I found it interesting that we proudly proclaim to have tires that will hold up to any weather - and yet the river had utterly destroyed them.

They were still SOMEWHAT recognizable as tires, but were covered in barnacles, deflated, and decaying.

Further proof that if humanity ever left this place nature would put things right again. 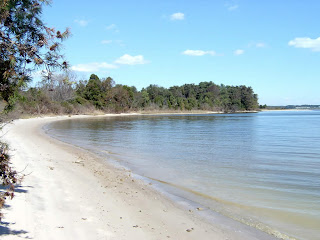