Jonah has been talking about homeschool instead of Montessori for a few weeks now.

The other day at the bus-stop he said, "Mommy, I'm ready to do homeschool now."  I was shocked.

It's always been ME who wants to homeschool and Jonah who wants to go to school.  I've tried hard not to push my agenda on him.  I want him to be free to make decisions and tell me what he thinks and wants and develop his own ideas.

When I asked him why he explained in his way that the rules are arbitrary (at least some of them) and that is frustrating for him.  He has also explained in the last few weeks that the only reason he goes to school is to see his friends, and if we could arrange for him to see friends outside of school he feels homeschooling would be a much better arrangement.  He feels he would learn better that way if we could put more of our money toward school resources and he feels he would get more out of time with friends during playdates than just recess and lunch.

I agree with him, but wow...I'm bowled over by the entire thing.

First of all, there was some panic because there is this thirty day policy at his school that says we have thirty days to decide if the school is a good fit, and if we pull out after those thirty days then we are still responsible for paying the entire tuition bill for the school year.  That is RIGHT out of the question.  Forget it.  We simply can't.

As the thirty days approached I got more and more nervous as we hadn't made a final decision really...

So we finally talked to the assistant administrator who is also a family friend.  She explained that the thirty day period would not apply in our case and not to worry about it.  Take as long as we need to make our decision and just please give them notice before we pull Jonah from school.  She also answered a lot of my questions as far as what has been going on in Jonah's class and why the rules seem so different than they were in years past.  She asked if we would please give it another month.

I wasn't making any promises, but I did write notes to the teachers asking for different sorts of spelling words and more challenging math work.  The teachers were AWESOME about complying and said to please let them know if there was anything else they could do to make Jonah's school experience a positive one.  They do seem very invested in him and his education and want to do the very best things for each child.

Jonah is still ready to homeschool - but has mentioned looking forward to riding the bus after the weekend and to the Fall Festival at his school, which is October 22nd.

We told him that we would reassess after this month, since things have changed as far as curriculum and the teachers seem to have a better grasp on what he needs.  At the end of this month, if he is still wanting to stay home, then we'll do that - it will also give me time to find resources.  He said he is NOT ready to just go straight to unschooling.  He would like some workbooks and curriculum, so I am going to honor that and find the very best thing we can afford.  We WILL give the school a tuition check for November along with notice that Jonah will not be returning to school.  It will also give him the opportunity to change his mind without penalty during that month, and we can really talk about how things are going to work as a homeschooling family.

I am excited about this, but don't want to get TOO excited.  I think that his school is an amazing school.  The best school possible, really, as far as schools go.  I don't want to throw that away on a whim.  But things when Jonah is home are better.  We avoid the morning fight to get out the door on time and the afternoon grouchies after the bus stop drop off.  We get things done much more quickly and Jonah learns a lot more.  Plus we have time to work on the things we love: 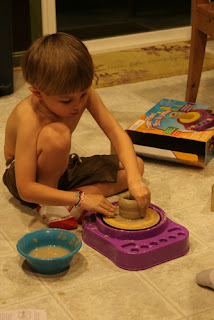 Which for Jonah, is starting to include simply AMAZING things.
Posted by Missy at 8:44 AM

My son chose to leave his Montessori 3-6 class when he was 5 to start home education too... all the best for you all in this time. I loved his preschool and worked there at various times. 18 months on it's working beautifully at home now and we're continuing with the Montessori program at home.

That sounds great, Tamara! Thanks for the encouragement and your comment!