Yesterday we had a super full day.

We spent most of the morning deciding if we had the time and $ to go to Baltimore to see a play friends of ours wrote and directed.  We eventually decided against it, (it was the right decision), and headed to Panera for lunch.

We ended up taking a 2.5 mile hike with both kids.  Jonah complained a bit, which isn't the norm for him, but I'm pretty sure he was up until 3 AM or so watching Godzilla (the 1970's cartoon version), so he wasn't feeling at the top of his game.

I was happy to be out on the trail.  I walked ahead much of the time, thinking about things.  I made some peace with myself and God about selling the house, which we're probably going to end up doing to get into the RV.  I love this house, but in the end, even with all of our memories and energy and meal cooking and measuring of children, it's just a thing.  A house is only a home when your family lives there.

I'll still probably cry when we sell it, but I think I'm ABLE to go through with the selling of it now.

After the hike we came home to regroup and grab some raisins and change out of our muddy gear, and then we headed north to a bigger town to make stops at UPS for some sound equipment Michael ordered for an install he's performing for a local church, Bike Doctor for some bike repair (Michael was able to get a great bargain on a lot of equipment: new headlight, new chain, lube, and tubes all for $106 - we've been saving cash in a bike repair envelope at home, since Michael's car is literally his bike), and Chilis for some eats (my parents got us a gift card for Christmas).

By this time, Maeryn was asleep and remained asleep through dinner.  Dinner was fantastic and fun, though Jonah had some perfectionism struggles with the activity sheet and when dinner wasn't exactly what he expected.  We've had a tough couple of weeks when it comes to perfectionism, but we're all working on it.  Lots of hugs are necessary.

When dinner was through we went to Dick's at the mall and picked up two mummy bags rated at zero degrees for Michael and Jonah's planned backpacking excursion on the AT this March.  We also grabbed 50' of rope and some goggles for Jonah's swim team practices.  I also threw in some earplugs for Michael, who has super sensitive ears, so that swimming would be more fun for all of us this summer.  We had a $15 gift card to Dick's and the bags were on sale at under $60 each, which is a pretty amazing bargain for such good equipment.  We'd been saving for this for awhile.

We were unable to get a youth backpack for Jonah, so today we'll probably head to REI, which is quite a hike, but always worth the trip.

It took us about four months to save for this particular trip - just to give everyone an idea - but it feels pretty amazing to have the cash you need and to have planned ahead with your budget.

After Dick's we came home - exhausted...

But not too exhausted to try out the new bags: 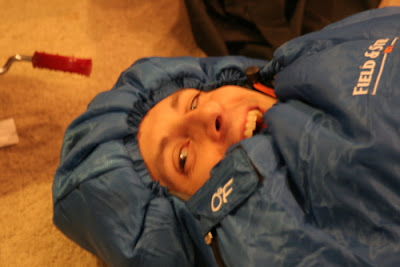 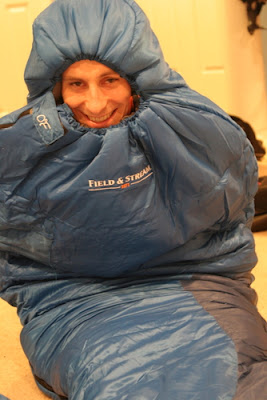 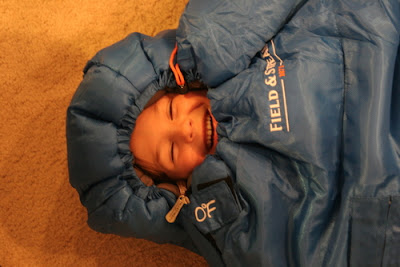 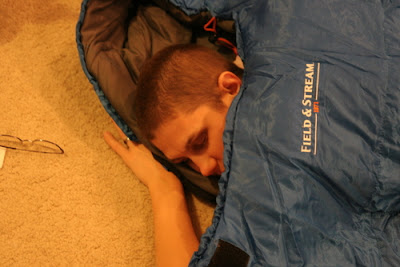 Labels: being debt free, the outdoors