Today was unseasonably warm.  It was so necessary for us.

I think the entire family has been in a mid-winter slump.  Jonah was watching Jimmy Neutron marathons and feeling generally sluggish, not to mention grouchy.  Maeryn was feeling sickly and had frequent tummy aches.  No one was motivated to get out and do ANYTHING.

So today when the thermometer his 60, I was so happy to have homeschool group at the playground.

The kids played for a good three hours.  It was wonderful.  Maeryn is currently chillin' on the sofa with Diego and a plate full of pretzels and a sippy full of rice milk under the Steelers blanket and Jonah is exploring our back yard.  Praise God for renewed interest in the back yard!  (Granted the renewed interest is mostly in the nasty snow melt that is inhabiting the sandbox that we neglected to cover...but hey, I'll ask him to wash his hands before he eats...)

Today we tried our hand at "magic rocks".  They haven't done very well.  They're supposed to turn into these four inch crystal towers in six hours.  So far they're about a 1/2" tall and we're about eleven minutes shy of six hours.  Alas.  There is another round of rocks you're supposed to insert into the tank at the end of the six hours for another six hour bout.  Maybe the first round rocks will grow much bigger during that time?

Regardless - today has been a good day.

I must, however, give fair writing to Bailey, our betta fish who passed away this morning.  He was a good fish and lived almost two years on our kitchen counter.  He is now in his final resting place in our front flower bed with an appropriate casket made of a crayon box and a tasteful headstone marked with Sharpie.  An appropriate monument was hand drawn and colored to hang above my work station in the kitchen. 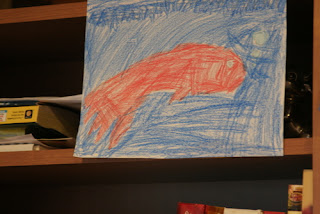