Two nights ago I started reading Animal, Vegetable, Miracle: A Year of Food Life by Barbara Kingsolver.  It's the story of a family who moved from Arizona to Appalachia in order to become independent from the food "system".  For one year, they vowed to only eat foods grown locally.  They planted a garden, scoured farmers' markets, and tapped water from a nearby spring.  I'm only on chapter three or so, but already it's been a great motivator and enforcer of things I'd already decided.

Since going as organic as possible, we've found our grocery bill has grown significantly.  We'll be splitting our grocery shopping between Wal*mart (shudder) and Giant for the time being.  Wally World for non-produce and Giant for produce.  We're hoping to still buy groceries in an affordable way and buy foods that are healthy for our family.

I'm looking forward to the opening of the farmer's markets this spring and thinking about planting the garden in the back yard.  I had a small one last year, and this year I'd like to plant again.  We didn't have a huge yield last growing season, but I've learned a lot since then, and I'm hoping to do better this year.  It's no easy task to balance affordability with quality.

We've been working hard to eat as seasonally as possible as well, even though we're still frequenting the big-boxes.

Roasted root veggies are a tasty way to spend the seasonal abundance.  They're easy in the crock-pot.  I chop carrots, rutabaga, parsnips, onion, butternut squash, and potatoes into the crock, add a few dashes of cinnamon, some oil (not too much!), pepper, a teeny bit of salt, and some minced garlic and cook on low for about six hours.  It's tasty.

We have been having trouble with the kids buying into the new way of eating.  They aren't so keen on whole foods and homemade pizza sauce.  Maeryn finally ate a little of the pizza (this is the second time we've made it homemade from top to bottom) but Jonah complained when he found chunks of onion in the sauce and refused to eat more than a few nibbles.  His rebellion has been to make his own grocery list including potato chips, marshmallows, graham crackers, pretzels, and Cocoa Puffs.  We went ahead and let him get those things on our last grocery trip and he and his sister have been splitting the prize for the last two days.  They haven't eaten much healthy food since.  I'm trying to trust the unschooling process and just keep offering tasty whole foods while setting a good example with what I choose to eat, but I can't help worrying.

Jonah and I have talked about how he feels when he eats certain foods vs. other certain foods, and he admits that he feels better when he eats healthier, but the junk foods are easier - at least easier than the health foods he enjoys - he's not much for raw veggies, though last week I saw him with a raw broccoli stalk, eating it like a turkey leg while playing checkers with his dad.

Perhaps all is not lost.

In other news - you MUST, if nothing else, begin buying organic sour cream. 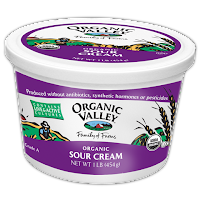 Canning isn't hard, doesn't take nearly as long as you might expect and is well worth the effort. You can do it - you'll be happy you did.

"he admits that he feels better when he eats healthier, but the junk foods are easier" --> The problem of EVERY American (especially me!)

One of my favorite canned things is my Mom's tomatoes. They work INCREDIBLY well as a replacement for pizza sauce (just add garlic, fresh basil & oregano), and they also taste great tossed into pasta (hot or cold). If you do grow a garden, make sure to get some heirloom tomato seeds from the farm market.

1. Amazon is a great source of organic food that can be delivered to your doorstep in bulk. Sometimes they have great sales and they have a good subscribe and save program.

2. Bento! Have you ever seen pics or blogs about bento lunches? Sometimes I believe it is all in the prresentation. So maybe if that healthy veggie or fruit, etc. were in fun shapes like flowers and stars they might be more receptive to them. The possibilities are endless!

3. Maybe try making homemade graham crackers with organic ingredients so he can still have a favorite snack.

4. I read a book once called the Healthy Lunchbox and the biggest thing I took away from it was that children look to their mother's for developing eating habits. So even though right now they are rebelling, they are still watching you and will follow your example!

Hope that helps! It's something we try to work on here as well.

Thanks so much, everyone! I'll be trying ALL of these ideas!

And Jeff, SO TRUE!