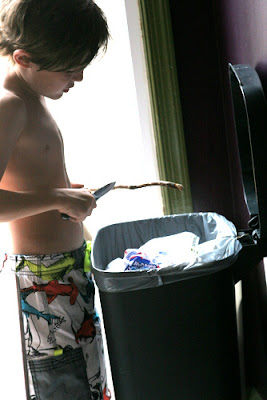 The latest in unschooling is Jonah craving his own magic wand from a local rhododendron tree.  We picked in at night at the New Moon.  (We had a bit of a poison sumac scare...  but that's a story for another time...)

Since then, the family wood carver has been working on his wand.

He doesn't spend an enormous amount of time on it each day - just a few minutes here and there in between Minecraft, Wizard 101, science workbooks, spy missions around the neighborhood, building with LEGOs, and lounging in the $30 baby pool from Walmart that currently lives in our backyard - but he does spend time on it each day.

He even had his very first wood carving injury yesterday on his thumb.

I admit... we were both kinda proud.

He refused a band-aid and showed it off to his sister, friends, and dad.

Battle scars for the warrior.

Sometimes I worry that unschooling isn't "working".  And then I think...  what does that even mean?

My kid is carving a magic wand out of a tree branch we harvested at the New Moon.