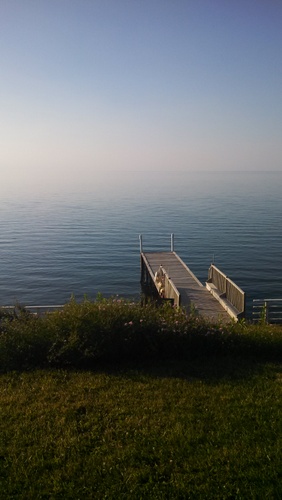 I'm just putting it out there up front.

It was crowded and expensive and cluttered.

We went to the falls far too late in the day and had an exhausted five year old who became much more daring than her mother would have liked.  I freaked out when she tried to climb the barrier to the incredible drop to the bottom of the American Falls and we left.  It was a mile to walk out of the park and another mile to the car.

We had trouble planning and finding grocery shopping and our camp ground was thirty minutes from the falls and we couldn't find much else cool.

On top of that, the campground was super nice (see the picture above, of our view of Lake Ontario), but children weren't allowed to go anywhere without a parent.  That included (the manager made this abundantly clear) the playground that was directly across from the bus.  Literally 25 feet away and I could see the kids out of the window... but they had to be directly supervised.  Jonah was angry and depressed the entire time.  He was used to freedom and bike riding and playing with other kids late into the night.  The other kids were latched to their parents and therefore their campsites (for the most part).  The communal meeting barn looked neat from the outside, but the inside was covered with dust and cobwebs and was obviously not actually in use anymore.  The public toilets were disgusting.  The laundry facilities... let's just say we waited for our next location.

So... we learned a bit about the rules from which to steer clear.  We are working to not go out quite so late at night when Maeryn is tired.  I am trying to chill out in general, but with the many new places it is sometimes hard.

Here's hoping for clearer skies in the weeks to come... and cooler weather!
Posted by Missy at 6:00 AM