The Ultimate in State Parks

Baxter State Park in Maine is known throughout the world as the hiker's state park.  Boasting the peak of Mt. Katahdin and the end (or beginning) of the famed Appalachian Trail, it is rustic, beautiful, pristine, and remote.

After trekking the AT and arriving in this area of Maine, you enter the 100 mile wilderness.  There is no food, no water, no hotel stops, no ATM... you are truly out there in the middle of nowhere.  And alone.

When we arrived at the park, the ranger laughed when Michael asked if there was WiFi:

"We don't even have electricity!"

It was late in the day when we got there, owing to Michael's want to go and his inability to leave due to work.  The ranger suggested a short-ish hike around Cranberry Pond so we wouldn't get stuck in the dark, and we set out.

I was nervous - Baxter has had issue with black bears lately.  They have grown dependent on human food sources (dumpsters, campsites, etc.) and have taken to tearing open tents to gain access to nutrients - for starving bears who have forgotten how to forage through generations of hand-outs, sometimes these nutrients include human flesh.  Many parks are asking that hikers and campers take special care to hide away all food away from bears: if they don't associate humans with food, they will be less likely to attack.  This is the case with many other animals as well, like seagulls...

I soon forgot my fear as we entered the forest.  If you don't believe in faeries, you haven't hiked Baxter. 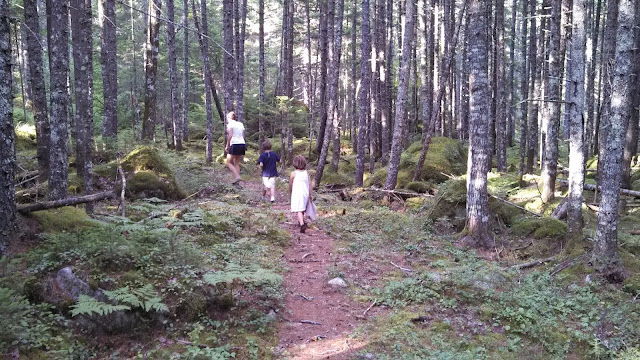 Mosses and lichen grow here that grow nowhere else in the world.  It was truly a wonderland of vegetation... and of fauna.

We saw moose tracks, deer scat, and raccoon tracks along the way.

Even when Michael and Jonah ran ahead of us at the end of the trail (which became dirt road) to get Sally (the car, for those of you who aren't regular readers).  Maeryn was getting tired.  It was her longest hike to date: 4.1 miles.  I tried not to freak out as dusk fell... and the prime time for bear spotting.

Not telling which two.

I stayed up late and researched bears.  Which led to wolves.  Which is a whole other story.