A Week in a Day 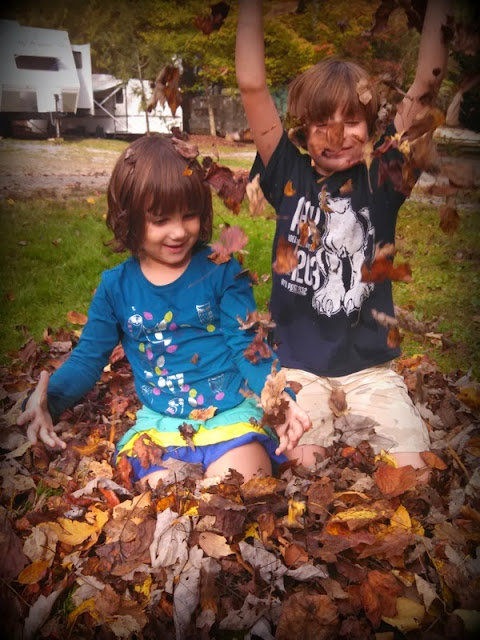 We spent another week in Asheville.

And it was a busy week.

But not a week for photographs.

I took this one of the kids playing in the leaves the day after Stingy Jack's, and then the camera was dormant.

Jonah went to ballet class.  He was not the only boy.  In fact, there were four other boys in the class.  When it was time to go he started to cry.  I thought maybe the class had been terrible - maybe the smiles I had seen through the observation window weren't his genuine feelings:

"Did something bad happen in class?"

He shakes his head

He buries his face in my stomach.

"Jonah, are you sad that you have to leave?"

That was it.  The tears came.  He hugged me tight.

"I don't want to have to leave here."

I couldn't blame him.

Maeryn went to Circus School.  Yes, there is, in fact, another Circus School on the East Coast.  In fact, there are three that I know of now:  one in Brattleboro, VT.  One in New York, NY.  One in Asheville, NC.  Maeryn went to their Circus Explosion class for ages 5 - 11 and learned how to do magic tricks.  She came back and showed us how to levitate and make a coin disappear.

Maeryn also attended a pottery class, where she painted her own ceramic leaf.

And we were invited to a Halloween party.  And we went.  And we all had a blast.

In light of all this... we had a family meeting.  And then we decided to look for a house.

We found four that we liked a lot and called a Realtor: things were getting serious.

And we prayed.  Gosh did we pray.

And we went downtown to the costume shop (there are several) and bought elf ears for Jonah's Halloween costume.

And we toured all of the houses.  And prayed.
And narrowed them down to one we all loved.
One that was a five minute walk from Jonah's ballet school.  And a one minute walk to a playground.  With a yard.  And a half mile from downtown and the pottery studio and the climbing gym.  And the skate park.

God, if we are supposed to stay in Asheville and stop our trip now, let us get this house.

They declined our offer.

So we did some math.  And we prayed.  And we went out to eat at the mall and while the kids played on the in-mall playground we talked some more and we prayed.

When we got back to the bus Michael figured out that we could offer the full asking price if we got a specific interest rate.  We called the mortgage company.  And they gave us that. exact. rate.

And so we called our Realtor and we told him we would offer the full asking price.

And we continued to pray that if we were supposed to stop our trip now and stay in Asheville we would get this house.

And they declined our offer.

And they took the house off the market.

And so the answer was abundantly clear.

And we are sad.

But God is good.

We talked to the kids.  Both of them took it extremely well:

Jonah:  It's okay.  That just means that there might be a better place out there somewhere, or that there is a better house that God is keeping for us and it's not time to move in yet.

Maeryn:  Probably something was wrong with that house, Mommy, and God was keeping us safe.  Probably there was bad poison paint or something.