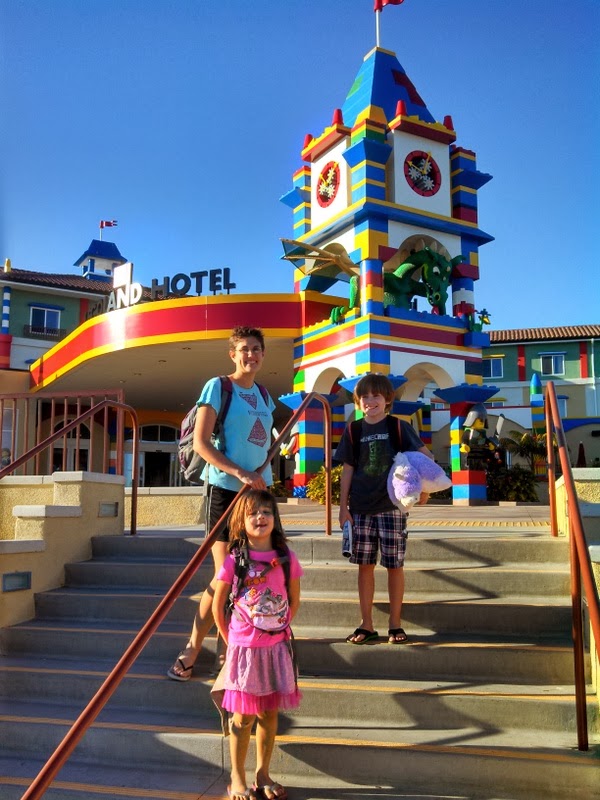 Yep, that's us in our shorts, skirts, and t-shirts + flip flops while our friends back east suffered through negative temperatures and the most snow they've had in a decade.

We'd say we felt bad about it, but we'd be lying.

What we did feel bad about was the fact that Maeryn's cough seemed to be getting worse instead of better, and we'd had these reservations for a couple of weeks.  They weren't cheap.  We prayed that a little downtime at the hotel with some unlimited internet and movies and maybe a bath in a warm tub would help.

We sprang for a premium room.  This was on both the kids' trip bucket lists, so we pulled out all the stops.

It was pizza and a movie night, which was perfect.

We ordered from a local place recommended by the hotel staff.  They said they had a 28" pizza.  None of us had ever heard of a pizza so big, and we were curious, so we ordered one to eat during our movie time: 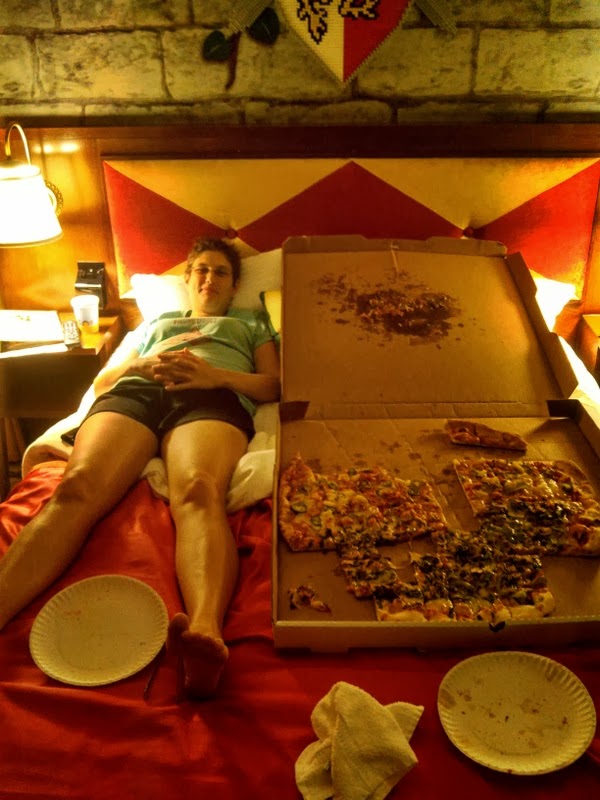 The kids got smaller pizzas with no cheese and pepperoni (their standard order).  The toppings on the huge pizza are half jalepeno and pineapple and half spinach, mushroom, and green pepper.  Guess whose half is whose?

After pizza Jonah wanted to go and swim in the pool.  I thought it would be best if Maeryn stayed and rested.  She'd thrown up mucus earlier in the day and I was worried.  How would we do the LEGO park tomorrow if she was sick?  Why did she keep getting sick?  What was going on?

She begged to be allowed to go to the pool.

We finally gave in, and all of us went.

It was cold.  The kids didn't seem to care and both dove right in and started playing with the blocks.  I was freezing.  Michael encouraged me to just go back to the room and change, so I did.  When I got back the lifeguard was standing near Michael and Maeryn, who had just thrown up mucus again into the flower bed outside the pool.  Jonah was still swimming happily and building foam LEGO boats to see how they would float.

They called the hotel medic.

Maeryn and Michael went back to the room.

The medic came and checked Maeryn.  He said that she just had a cold and he recommended we go ahead and take her to the park tomorrow - said it wasn't a big deal.

It felt like a big deal to me, but I didn't want her to miss the park.  I hoped she would feel a ton better in the morning.

We gave her a warm bath while Jonah went to the lobby and played on the huge LEGO castle and in the giant pit filled with LEGOs.

Maeryn finished her bath and put on her fleece Hello Kitty PJ's and crawled into bed.  She was sleeping in minutes.

I stayed up and waited for the boys and watched the Olympics.

I felt all those weird feelings about having a sick child and not always knowing exactly what is the right thing.

The boys returned and Jonah crawled into his bed to watch Netflix on his computer.

Michael and I switched from the Olympics to the latest episode of Sherlock.  At 0200, we went to sleep, hoping for a hearty breakfast (included with our premium room), and a healthy daughter when we woke.