In the Absence of My Other Half: Part 1 (Missy)

We knew it would happen eventually.

Michael told his work back in Maryland that if they needed him in the office he was willing to go back from wherever we were whenever it happened to be.

One of his bosses requested that he come back this week.

We researched the most cost-efficient methods for him to get back to Maryland and we settled on a three day journey by bus and then flying back to the Seattle airport.

He would be gone nine days total.

I admit that I was a bit panicked.

I would have to get out of the heart of the city after leaving him at the Greyhound station and on the crazy big highway back to the our campground.

The people at this campground were kind of mean.

There were no other kids around.

And March, when this happened, is always the beginning of my seasonal depression.

I know that there are plenty of women and men who deal with the absence of their spouses on a regular basis.  Military wives whose husbands go on tours of duty and into scary situations for months - sometimes years at a time.  I know there are husbands and wives who go on business for weeks and months in foreign countries.  I know I'm one of the lucky ones.  In fact, this would be the longest we've been apart in the past eleven years.  That all by itself just made it... well... hard.

I tried not to cry at the bus station.

I made it out of the city without killing myself or anyone else.

I even figured out stopping for Maeryn to pee and got food for the kids on the way home.

When I got back, I told myself:  You cannot panic.  You cannot get depressed.  You have to be strong.

I wrote down a long list of activity ideas on our white board.

I went outside to play with the kids.

We got out some movies we hadn't watched yet and watched them.

And we made our own ways of waiting. 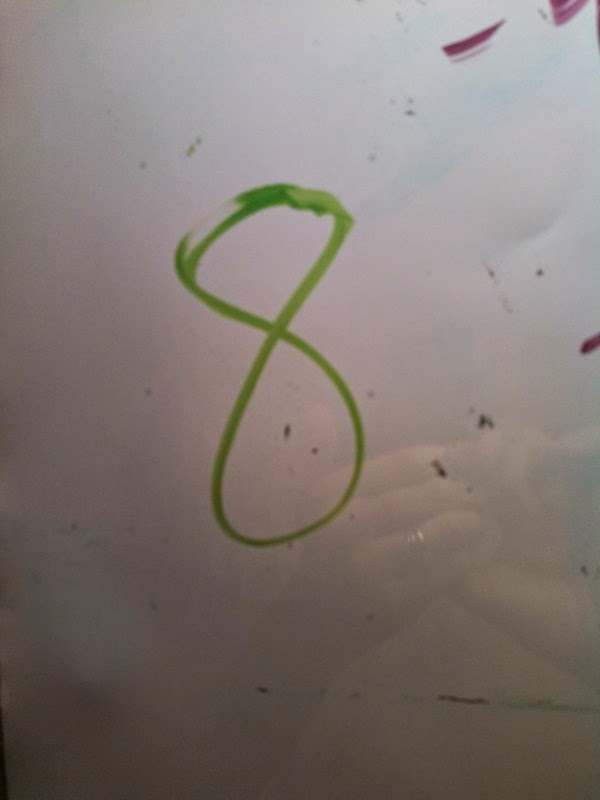 I kept track of how many days until Daddy came home on the white board above the list of activities and below the weekly menu.

I send Michael a picture of the number each day.

I will say this:  texting and sending pictures makes life about a zillion times easier than when I was trying to maintain long distance relationships in college.  A ZILLION times easier.

Michael sent me pictures as he passed through each state and we moved his magnet along the cloth map on the ceiling of the bus.  We texted a lot.

I sent him pictures of what I was doing with the kids. 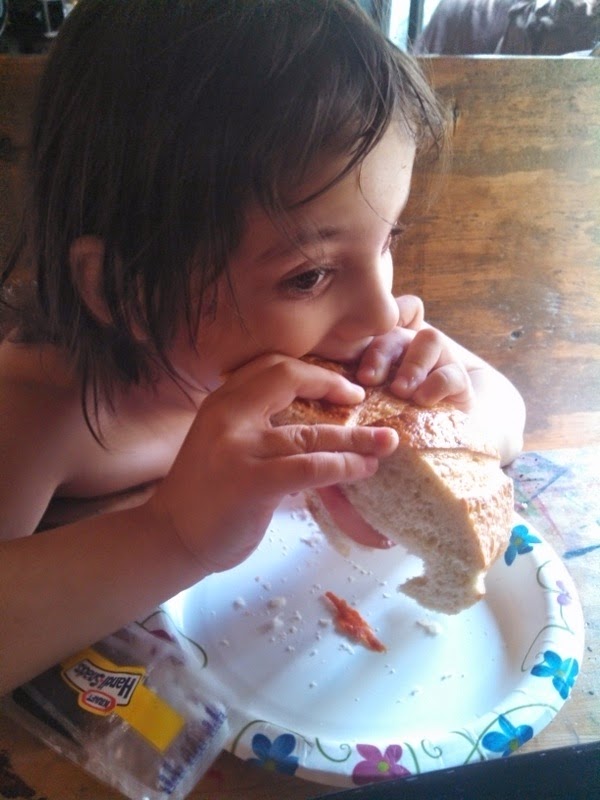 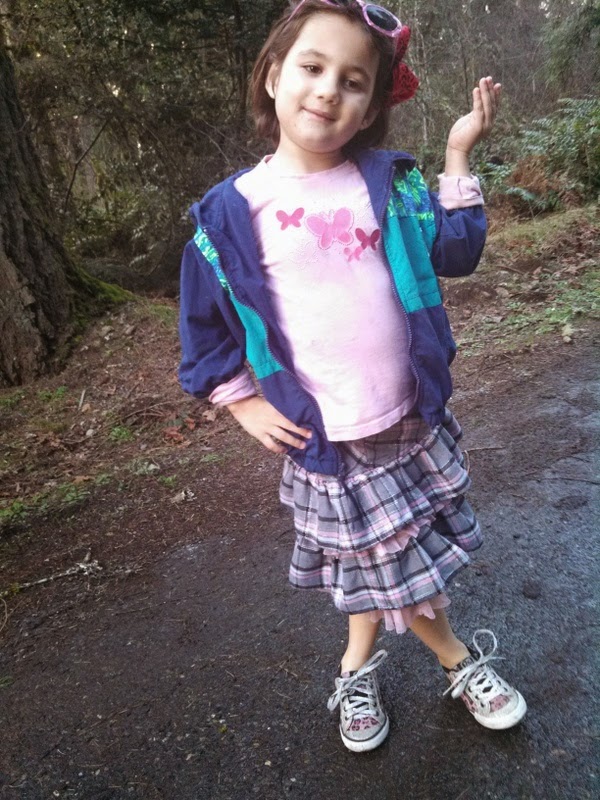 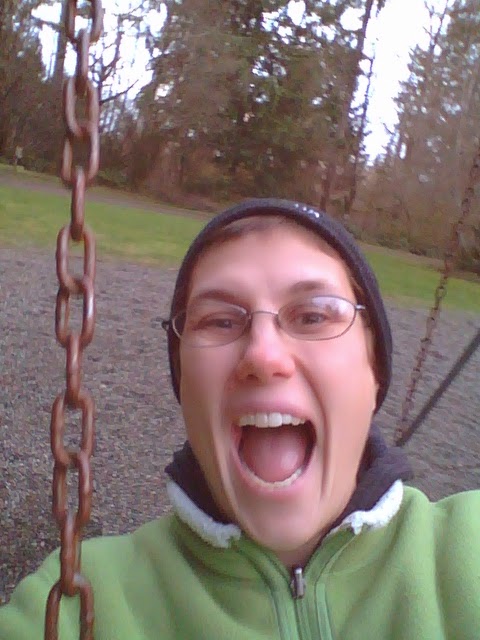 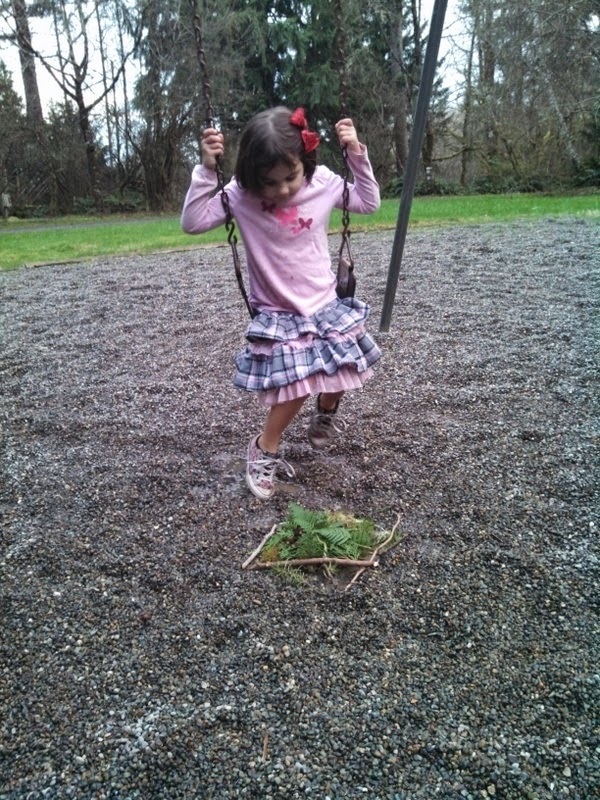 We went on a hike and played on the swings. 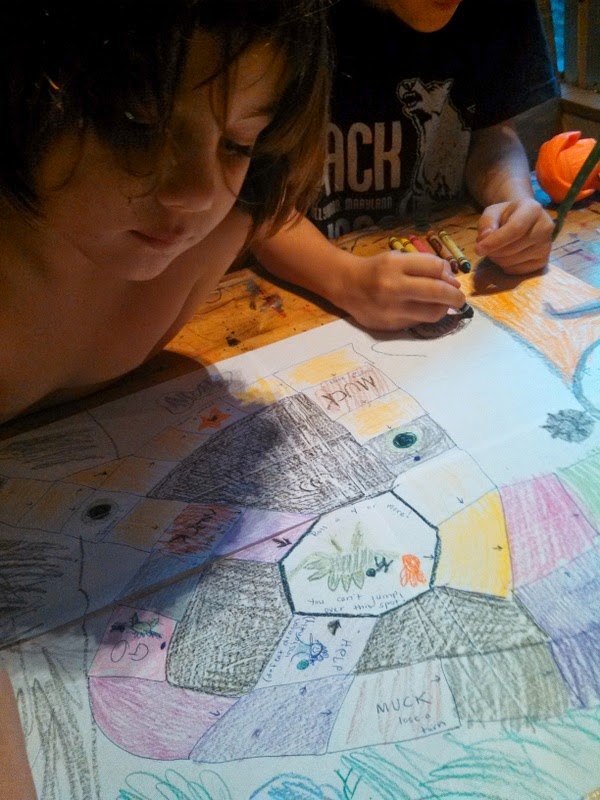 When we were tired and cold we came inside and I got out some paper, taped pieces together, and we made our own board game.

First we made one all together. 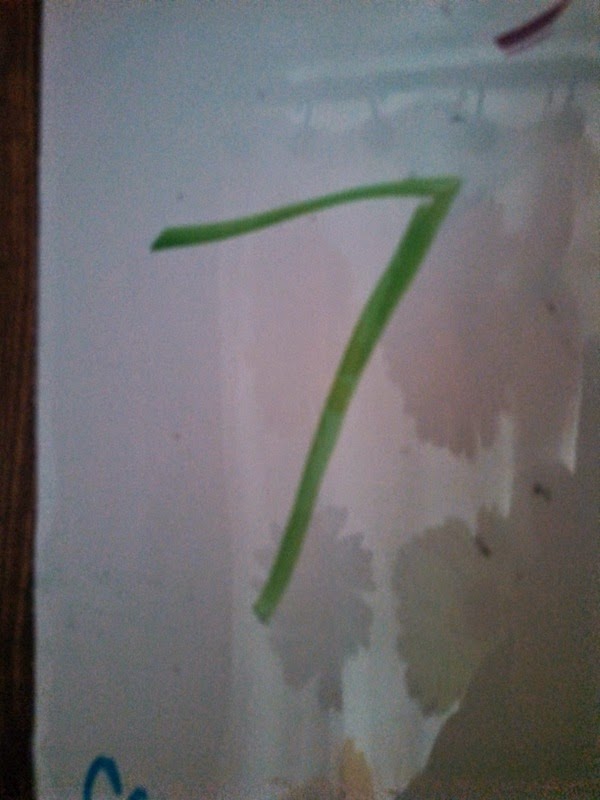 The next morning, I got up and Jonah was already at the table making his own board game.  Maeryn and I soon followed suit, and we had four fun games to play together. 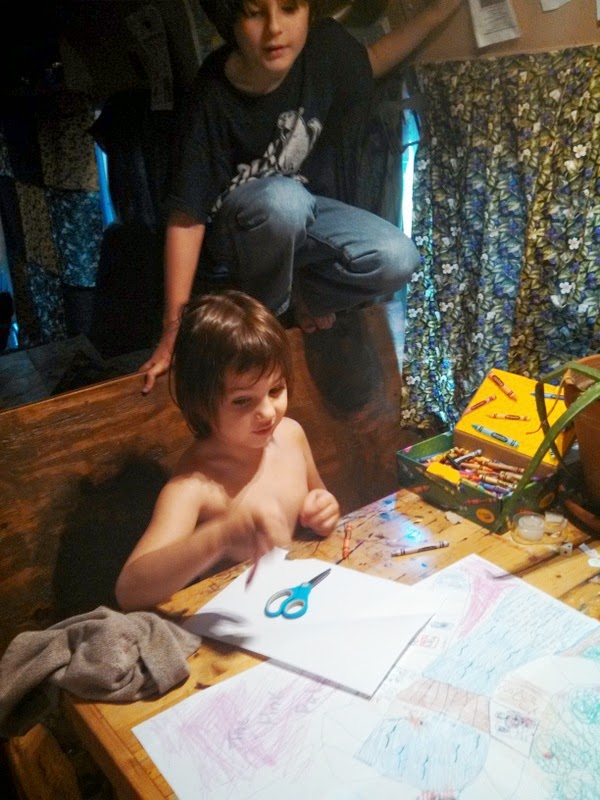 Once everyone was dressed, we decided to check out the Family Lodge at the campground.  It was supposedly open today. 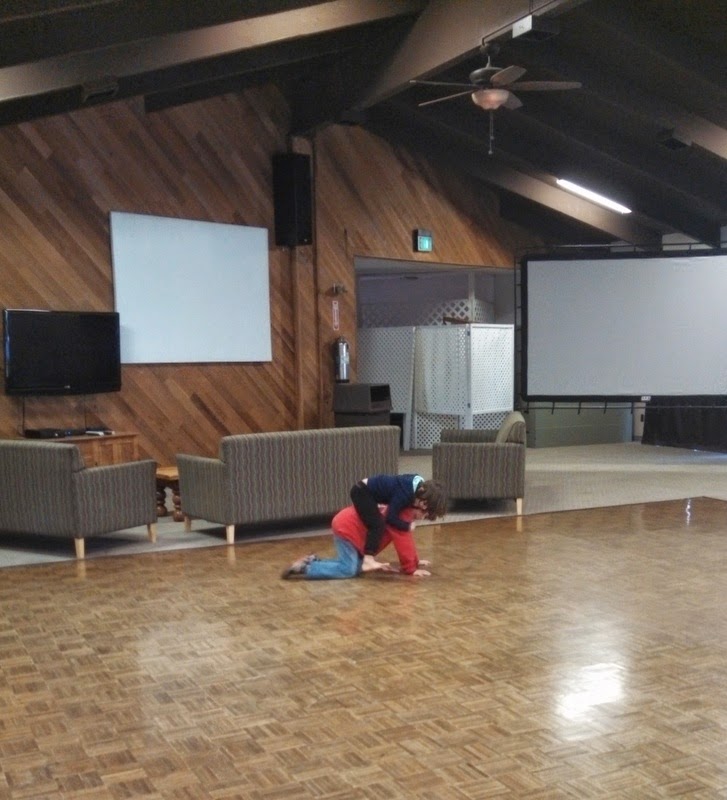 It was pretty big!

We also took advantage of the cool wooden playground outside the lodge.  We played all sorts of modified tag games.  I made sure we stayed until everyone was completely played out. 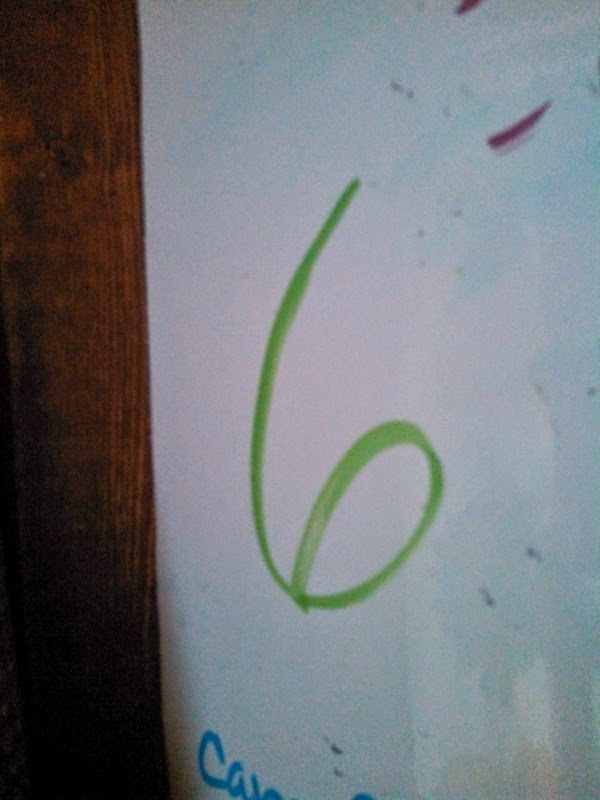 The next day both kids wanted to go back to the lodge to make crafts.

There was a craft activity listed on the calendar for the day for $3/person.  I grabbed my wallet and backpack and we drove over to the lodge.  Unfortunately, the craft had been canceled for the day.

Both kids still wanted to make a craft.  At the lodge.

So we went back, packed a bag full of crafty stuff and then drove to the lodge again. 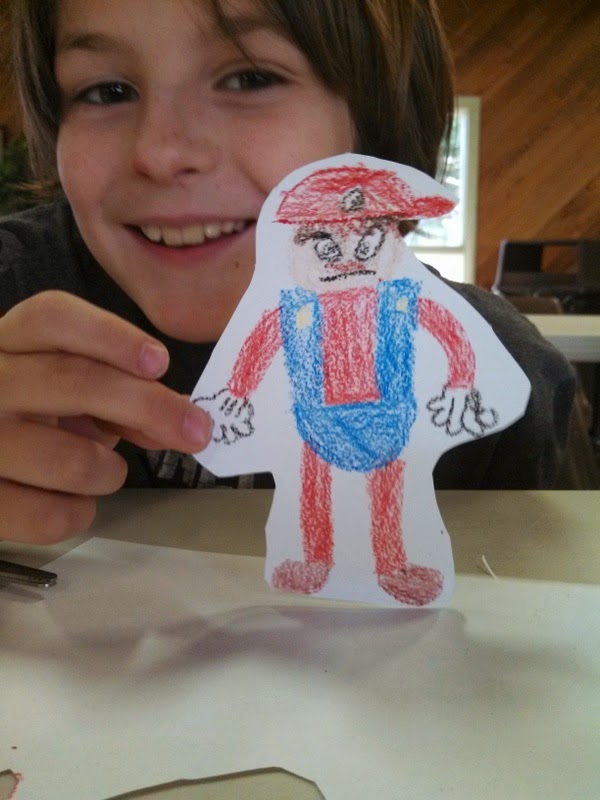 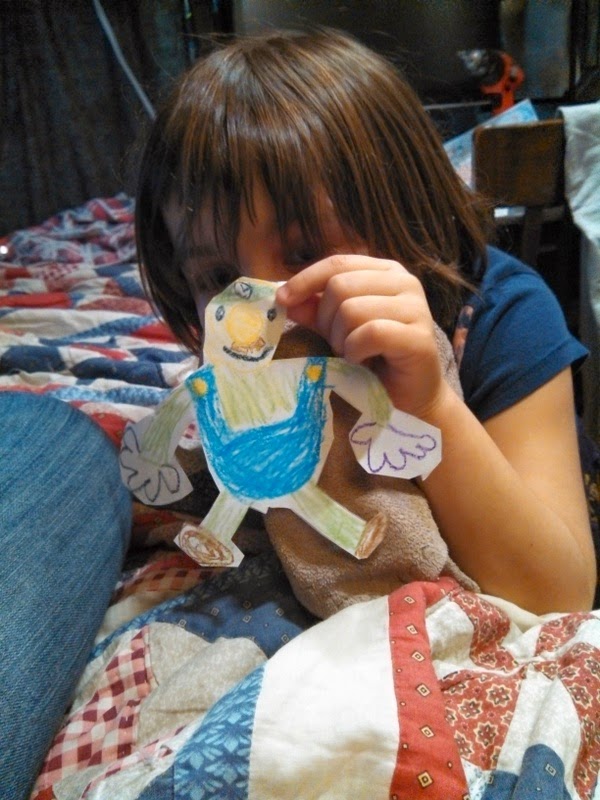 Each night, before sleeping, we called Michael and read the first book in the Heroes of Olympus series aloud over the phone.

This night, he wasn't able to participate.

I wasn't sure what to do.  I was sad not to be able to hear his voice over the phone, but trying to keep it together and figure out some other fun thing.  I asked if they wanted to go ahead and read without him but they didn't want him to miss the next part of the story.

Jonah smiled and ran to his bed.  He'd been reading a book in secret the past two days and had gotten most of the way through the first chapter.  Now, he brought it out to me and offered it up as the "read-aloud" book for while Dad was away.

The book was called Inkheart.

I did a three day (64.5 hour) bus journey from Ohio to Oregon back in August 2000. What a strange, delightful, insane, uncomfortable, amazing way to see the country--or at least the view from major highways and every single little post office the stinking bus stopped at. Still, it was quite an adventure, even featuring a weird vegan druid (lying) lady who gave me a plastic frog. I hope Michael gets some fun stories out of it.

Also, hang in there! Do you guys want to Skype some time?