Our second day in NYC was fabulous.

I managed to figure out how to maneuver the stroller through the crowds and we had a plan set when we checked out of the hotel. They also allowed us to check our bags for the day until our train.

In the morning we grabbed some free breakfast courtesy of the Comfort Inn Times Square, cleaned up and packed, then headed out on the town. We planned to meet our friend Hanniel at Bryant Park for lunch.

Our troop headed to Central Park, which is beautiful at all times of the year but especially so in the fall. 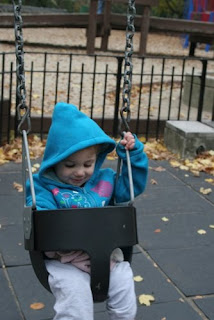 The park is great for families and kids and couples and people just out for a run or bike ride or walk and are looking for somewhere away from the bustle of the city. In the summer, each playground area (and there are at least thirty) has a spray park included. We played on two different playgrounds and swing areas, strolled around the park, and climbed on some rocks, which are a prominent feature of the entire park area. Tons of folks were out for their runs or bike rides, walking dogs, and hanging out with their kids. 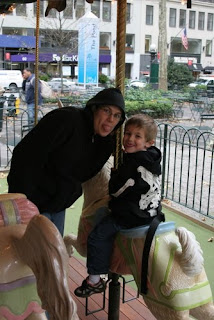 After playing at Central Park, we hopped on the subway and headed back to Bryant Park, where we found we were a few minutes early to meet Hanniel, so we watched the ice skaters (you can skate for free if you have your own skates) and rode the carousel ($2 per rider and parents ride free). We checked out the vendors set up all around the park, decided not to buy anything, and met Hanniel. The five of us headed downtown and ate lunch at the Tick Tock Diner. The food was great, the service wasn't so great. The waiter was very polite, but they were out of hashed browns and we weren't even acknowledged after being seated for about ten minutes. Then it took another fifteen to get our check.

Hanniel, the kids, and I dashed over to the station while Michael ran all the way back to 42nd Street to grab our bags and then ran to the station to buy our tickets (he had the cash). We ran down the stairs to our train, shouted our goodbyes to Hanniel, and the train pulled out at 2:44. It was a miracle we made it in time, and in honesty, a really fun time trying to make it on time :)

The train ride back was uneventful, and we spent our last night of vacation with Michael's parents relaxing. In the morning, his mom was nice enough to get up with the kids and we both got a chance to sleep in and catch up on our lack of sleep from the trip as a whole. We made it back home after a spin on Grandpa's trike (he was in a cycling accident that rendered him unconscious, broke his back, finger, and nose, and left him rather bloody, so he had to get a trike to continue his cycling hobby - seeing over the handlebars of a road bike was too strenuous for his now fused together neck vertebrae) and a stop at Chipotle for our final meal on the road. Both kids were asleep when we arrived at our usual nest. The Adventure Mobile was a disaster, but it's clean now - though there's this weird lingering stench - I'm sure Maeryn stashed something perishable somewhere in her carseat.
Posted by Missy at 8:30 AM