It's been awhile since I've written.  Life has been busy and I'm in the middle of directing a show for the local community theatre - we open next weekend - but that's all beside the point.

LAST WEEKEND we went to the Annual Flying Pig Marathon in Cincinnati.  It's an entire weekend of running with the marathon as the main event on Sunday morning. 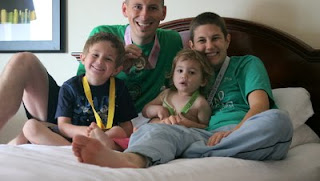 We had an amazing time.

It rained all weekend, and we were ill prepared, but we were happy wet, to be honest, and running in the rain is awesome.

The thing I like most about the Pig is that there are races for all ages and just about every level of runner as far as seriousness.  Everyone in our family ran a race.  My race was first: 5K. 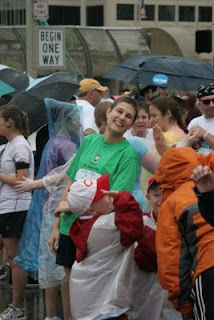 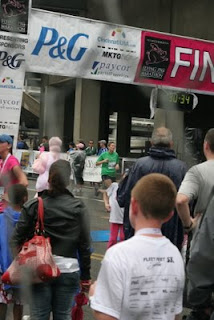 I did pretty well - didn't get under 30 minutes, but it was a tough and unfamiliar course, and I had a really fun time running. 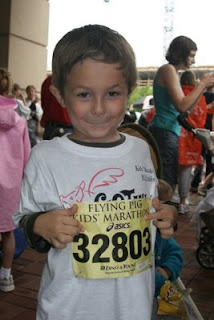 My only issue with Jonah's race was the end.  They allowed parents to meet their children at the finish, but there were HUNDREDS of parents and it was impossible to find your child.  Most kids were with school groups who had signs, so it was easy for them to find their group, but my poor little guy was totally alone - and only five.  I panicked when kids started to cross the finish-line at a walk.  I knew there was no way Jonah didn't finish the entire run.  He's been training for months.  But there was nothing I could do.  I just stood there and scanned the crowd and waited and prayed that some way, some how, I would find him.

Michael had paced him running on the sidewalks for as long as the police patrol would allow it, and then had to drop back and to the other side of the barricade they had set up along the sidewalks.

I had told Jonah to meet us at the end of the tunnel of fencing they had set up for a runner's recovery area.  When I did my race earlier in the morning, there was food and drink at the end, along with a bunch of porta-potties.  This was all gone when I made it to the finish line for Jonah's race.  NOT cool.

Luckily, last year, Parents Magazine printed a story about how to prep your kids for being lost.  I had followed their tips and told Jonah that if he ever was lost, he should find either a Mommy with kids or someone who with a uniform who worked in the store or for the company where we were.  I also prepped him to tell them his parents' names and what we were wearing.

He did fantastically.  I heard Michael's name announced over the loudspeaker  and they were asking him to come to the finish line.  I knew he probably couldn't hear, so I ran over with Maeryn in the stroller (freaking out because she's been sitting in one place for the last twenty minutes) and there he was - next to a lady wearing an outrageous pig costume.  She was very nice and said that he had done well - told her his dad's name and that he was wearing a grey sweatshirt.  I grabbed him and hugged him and was the most relieved I have been in my entire life. 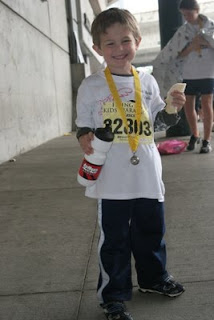 I hope that next year the Pig will figure out a better way to run the kids' race. 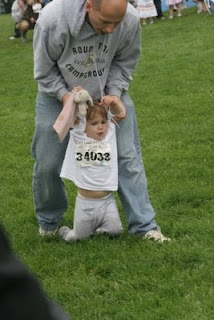 Maeryn's race occurred after that fiasco in a totally different location - on the green in a Cinci park.  There were so many kids running that they had to break the race into heats.  Maeryn was NOT happy about being in the third heat.  She threw an enormous tantrum and Michael had to carry her across the finish line when it was finally her turn.  She got her medal anyway and we headed back to the apartment for nap time and to re-group.


After meeting an old friend from college to drive around the city, we headed out to dinner On the Levee and ate outside near the river.  It was a lovely view and we had a good meal and a fun time with the kids. 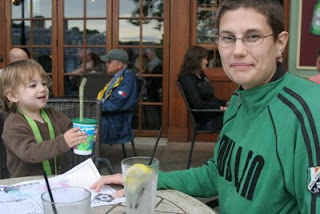 On the way out, there was a band playing in the mall (Eric Matthew Tepe).  We gave Jonah a dollar to put in their bucket because they were EXCELLENT and I thought it was epic to have live music like that in the middle of the mall.  Kudos to Newport, KY for their brilliance.

At bedtime we watched Star Wars: The Clone Wars Season Finale.  It was fun to have TV for a weekend.

The next morning was Michael's marathon.

It was POURING down rain.  Michael was gone before dawn.

When the kids woke, I turned on the tube, grabbed a shower, got them ready for the day and trucked them out to breakfast at a local eatery, then headed across the bridge to Cinci.  We walked everywhere, of course.

We had a bit of an issue getting to the finish line to see Daddy cross, but we eventually found a perch above the finish on the mezzanine of the Reds Stadium (the finish was underneath the stadium near the parking) and got to see him cross the line in 3:55.  Five minutes under his goal time - GREAT JOB, DADDY! 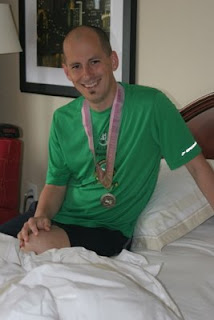