Both kids are currently interested in all things CHINA.

For those of you who aren't really sure how this unschooling things works, here's how we got to this cultural exploration amazingness:

2.  When he was finished, he wanted to find something similar, which was easy, because Netflix Streaming conveniently gives us choices that are "like" what we just watched, or have been watching often.  Through this, he found The Adventures of Jackie Chan.

3.  Jackie Chan, Jade, and Uncle (the major characters in the series) are Chinese.  Jade and Uncle play Mahjong, Uncle makes funky tea medicines, Chan fights evil with the martial arts, and in the opening sequence we see Jade using Chinese fighting fans - they don't explain the fighting fans.  Jonah wondered about them, so we watched some videos like this:

4.  We looked at Mahjong on a Facebook app.  Jonah wasn't interested, but thought it was cool that the game could be played in the U.S. 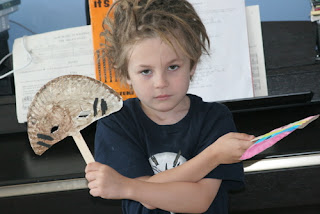 6.  Jonah and Maeryn were having TV issues because Jonah wanted to watch more Jackie Chan and talk about China.  Maeryn wanted to watch Dora.  We talked about compromise, and they found Ni Hao Kai-Lan.

7.  Kai-Lan led to both kids' interest in the languages and culture of China.  After watching an episode where Kai-Lan's grandfather makes dumplings, the kids wanted to try making dumplings of our own. 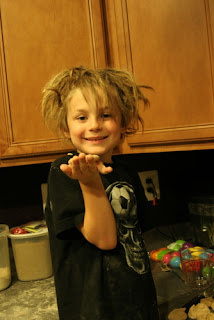 I went a step further, and one late night dinner was this: 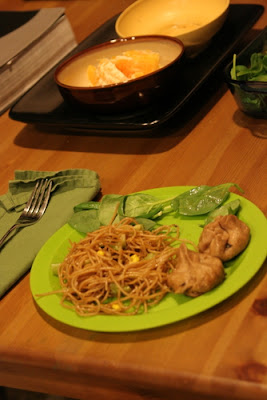 (If you have never had oranges with honey/cinnamon dipping sauce you are SERIOUSLY missing out.)

8.  We headed to the library today and Jonah requested books on China.  Maeryn got a book about panda bears.

9.  We've been reading about China all afternoon.  Right now, the kids are watching a Land Before Time DVD.  Not really related to China - but who knows where this trail of learning will lead next!  It's all an incredibly exciting journey I get to accompany them on - and I learn a ton too, like about that fantastic dipping sauce, not to mention that the compass was invented in China and you have to kill the silk worms in order to make silk.  I had no idea.

This summer we'll do some martial arts lessons, Jonah has been asking for awhile now.

The whole unschooling thing can be an incredibly scary ride.  Some days you think - what is the POINT of this?  Why are they SO interested in this "pointless" TV show or this weird toy or this strange art project?  But everything is leading somewhere.  It's amazing to see what happens if you follow the rabbit trail all the way.
Posted by Missy at 11:50 AM