Last night Michael and I watched Big Ideas for a Small Planet - a series of TV programs about how to live a more sustainable life.  I know that these shows aired quite awhile ago, but we don't have television service, we have Netflix Streaming, to we're a little behind the curve on just about everything when it comes to TV.

Regardless, we watched three episodes last night and one of them was about how to co-habitate with wildlife, since we're pretty much constantly destroying their homes.

There is currently a movement to provide housing for the animals that would have naturally lived in the space before humans so that they can move back in, or continue to pass through in their natural migration patterns.  Many people already do this with things like bird houses, bird baths, and bird feeders, but we're a little timid when it comes to providing habitats for bats, hawks, rodents, foxes, deer, insects, and the like, because we're not so comfortable with having them in our backyard, so to speak.  The movement focuses on animals who are in danger of dying out due to our considerable takeover of what used to be their space.

Artist Fritz Haeg established the project Build a Better Snag after doing considerable study in the Portland area to figure out which animals needed help.  He built a snag - another name for a dead tree - artistically, and displayed it for other artists so that they too could create housing for endangered animals, encouraging them to move back into the city. 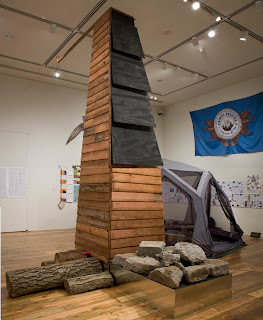 I know there are considerable problems with this - like cars, for example.  Seems like a pretty bad idea to encourage wildlife to move in so that they can get hit by cars and go through our garbage, but I think this guy and his movement might be onto something.  Perhaps we should figure out better ways to dispose of our trash AND better ways to get around town (sans automobiles).  More public transit, especially underground or high above it would allow more animals to live and move freely about.  Habitats for "less desirable" or more predatory animals could reside in parks and designated open spaces instead of in our back yards, and our backyards could house squirrels, birds, lizards, frogs, fish, and bees.  Will they mix - yes, the will - but is it also important for us to learn to get along with these creatures in better ways?  It's gotta be.  If we don't preserve ecosystems, it doesn't matter how clean the air is and how clear our waterways are - if the animals don't have a place to live, the ecosystems will fail and we're all screwed anyway, even if we clean up our act.

We've already got a bird bath and wildflower beds for pollinators -  this year I'd like to add a bee house.

What do you think?  How can we better co-habitate with animals?   Should we encourage re-habitation?
Posted by Missy at 8:39 AM

Labels: living with intention, the outdoors