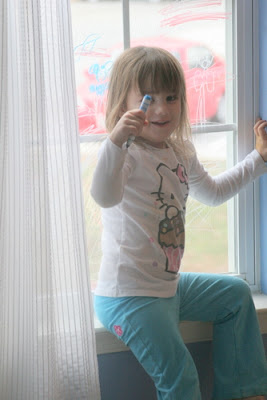 I am learning through this whole unschooling thing that there are a whole lot of things I have un-learned.  Things I used to do instinctively that I simply don't do anymore.

For the past few days, we've had the January Ick in our house.  You know the stuff - the nasty sniffles, the mild sore throat, the sinus head-ache, the achy tiredness, the general blah feeling of the January Ick...  It started with Jonah, moved on to Michael, and is now affecting the entire household.

The thing is - those of us who are older seem less apt to take care of ourselves than the younger.  Maeryn, especially, is a great example to those of us who tend to deny that we are sick, over-do things in spite of our illness, eat junk, etc.

For the past two days, she's been watching movies under a fleece blanket on the couch and slamming down OJ by the bucket.  She, of course, is mostly recovered.  The rest of us are in the grouchy stage.

Today I tried.  I made myself tea and drank it while it was hot and took vitamin C and then... well...then I ran the vacuum to pick up the popcorn crumbs from yesterday and loaded the dishwasher and now I'm blogging...

Point is, we can all take a lesson from Maeryn when we're sick.  If we want to recover quickly, we'd better give our bodies the things they need most: rest and good nutrition.  Stop trying to be super-human and take. a. break.

In other news, and speaking of probably over-doing things... Michael and I mapped out the bus route last night.

We're extending our trip over a year to try and get in all of the things we want to do and see.  We begin right here in Maryland and end in Michigan after touring most of the U.S.  It's so exciting I'm pretty sure it's just a dream, so I'm trying not to hope too hard that everything will go as planned.  Things like this NEVER go as planned.

As for the rest of the bus... things are going slowly.  Illness and travels to visit friends and family have kept us out of the bus.  We're still at the same place we were a month ago as far as actual, physical labor.  Michael, however, has kept working with a steady hand at placement of electrics and other assorted facets that can be worked out mentally and on paper.

It's our prayer to leave our current residence in June 2012.  We have the "best laid plans", but we are totally dependent on God, who has the ultimate control.

In the meantime, if you know anyone who might want to buy a nice townhouse in Southern Maryland, let me know!
Posted by Missy at 10:03 AM