For those of you who don't know, I have two "spirited children".  This is a term coined by Mary Sheedy Kurcinka who wrote the book:  Raising Your Spirited Child: a guide for parents whose child is more intense, sensitive, perceptive, persistent, energetic.

Most families who have spirited kids are only blessed with one, and in large families, maybe two.  Our family contains four spirited people, two of whom are our children.  The book changed my life quite literally - just knowing that there was something different, that I wasn't alone, that there were ways to help, that my intense tiredness at the end of the day probably wasn't some horrid medical problem...

In the book, there are several things that explain the term "spirited".  All kids are different, of course, but there are things that set spirited kids apart.

One of them, is a negative first reaction.

Not all spirited kids have this, but many do.

It's an intense negative response to anything new, different, changed, etc - even if it is something positive and fun.  This could be a gift, a trip to the pool, a new pet, new clothing, the fact that today is Tuesday...  the list goes on.

This turns a lot of people off to Jonah immediately.

I've had Sunday School teachers tell me that he "failed to integrate".  I've had babysitters in tears when I came home.  I've had grandparents offended.  I've been so frustrated that I've had to walk away and cry in the bathroom.

I've noticed lately, that the negative first response is cascading rapidly downhill.  It's high allergy season, and Jonah's allergies are many and horrid.  There's also a lot going on with our family, and we're not the type to hide things from our kids when it has to do with them - with all of us.  Spirited kids are incredibly sensitive too - and so any negative feeling from anyone else comes up in their own emotions and behavior.  Jonah feels the stress Michael and I feel over his job and the bus trip.  He feels it when I'm frustrated with his sister - who is spirited as well.  He feels it when I'm tired.  He feels it when Michael has a hard day at work.  He feels it when I just want to be alone.

Today is Easter, and it's been a good day so far... but not without it's hardships.

Last night Jonah did not want to stop watching TV to put out his Easter basket.

This morning he was disappointed with his loot.  He was upset that the egg hunt wasn't what he expected.  He wasn't sure he wanted to go to church.  He didn't feel like eating at Applebees.  He was angry because his dad gave him a hint about where to find an egg (after he'd asked for one).  Things were not as he'd like them to be.

Thing after thing mounted up.

How I balk at going to a new place.

How I wish everything would be just the way I picture it in my head.

And I wondered, when I was on one of those strings of negatives kicks, when I felt stressed and crappy... what would I want to do?  What would help me to feel better?

So that's what we did. 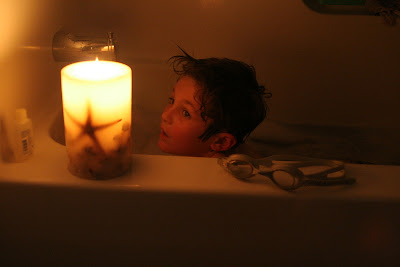 His first reaction to my suggestions was:  "I always feel funny before I take a bath."

We talked through it - I explained why I thought it was a good idea.  I told him I promised to make the water "hot tub warm".

He asked for bubbles.

I complied with dish soap.

I asked him if he would be okay with a candle - explained that it helped me feel better sometimes when I was stressed.

"But what if it falls into the water?  Will it catch everything on fire?  Will the soap make it explode?  I don't know if I like it dark.  I don't want it on the side of the tub...."

But finally - things settled down.

He got some time to relax.

He wore his swim trunks and goggles.

I'm hoping it will help to break this current negativity cycle.

I'm hoping that he will feel more positive about life very soon.

If not - I've got to stick with him through it.

Unconditional love is like that.
Posted by Missy at 12:39 PM

I just put a hold on that book at the library. I have one of those kiddos too :)

Jess - it will change your life!!!