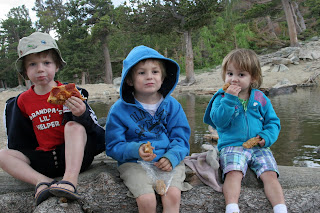 Above is a picture of my nephew, my son, Jonah, and my daughter, Maeryn.  Between Jonah and Maeryn is Lovey.  She is a rabbit, and she has been lost.

We were at Blockbuster checking out movies, getting popcorn and candy.  Maeryn tried to grab an orange soda and all of the Sprites fell to the ground.  We picked them up.  She wanted cotton candy but it wasn't a planned purchase so we debated and negotiated and decided she would buy it with her allowance money.

On the way out, she noticed SQUARE lollypops and had to point them out because she had never seen anything like them before...  and I hadn't either...  so we made the lady wait with our bag and looked at them, even though I was getting a little irritated.

It was below 20 degrees F outside, so we rushed to the car.  I wasn't patient.

We stopped at the grocery store.

We went fast to the ice cream section.  I wasn't sure where it was so I had to look up at all the signs.  It was the last thing in the store.  We got Ben and Jerry's but it took a long time to decide on the flavor.  We finally picked Chocolate Chip Cookie Dough and she had to get it out of the freezer herself.  With two hands.  And she carried it to the check-out herself and I handed her the bag when we left and then we ended up at the house we are trying to ready for renters and we watched Disney's Peter Pan and made popcorn and ate our ice cream and it wasn't until the movie ended that we realized Lovey was missing.

So we went anyway.  I peered in the windows.  I was crying.  She was crying.  Guilt washed over me.  I had been frustrated.  I had been lax.  I was not paying attention.  I had failed.  Failed a huge mom test.  Lost the thing she loved best.

This morning we called the grocery store and they said no one had turned it in.  I called Blockbuster and the woman combed the store and had no luck finding it.  I went outside in the freezing cold and searched the car.  Again.  And I went through the search of the house we had done before we left over in my mind and thought back through the night and tried to remember last time I had seen Lovey.

Was it at the house, on the couch, while she was curled on my lap watching Gnomeo and Juliet?  Or was it when I didn't have the time to share the joy in square lollypops or when I tugged on her hand to get her to walk faster through the store...  or when we were at the cash register and she put the ice cream on the conveyor herself and said, "This is for me and my mom!"  And everybody smiled.

Tears rolled down my cheeks.  It had been a hard night.  She was still sleeping with "a replacement lovey" next to her hair, splayed across the pillow:  Lovey's Sister.

My friend, Summer, went to both places again when she heard the news.  Everybody knows about Lovey.  And she searched through the ice cream cooler by the Ben and Jerry's and she left her name and number and a better description of Lovey with all the people and she called to say she didn't find it.

So when Maeryn got up this morning I came to her, tearful and guilty and filled with feelings of regret and sadness and of my own blankie that was left at a hotel in Ohio when I was about her age and the Velveteen Rabbit in the burn pile and I asked her how she was doing.

She smiled at me.  A big smile.  A broad grin and she said, "Mommy, I don't think I need Lovey anymore.  I slept all night with Lovey's Sister.  I think the fairies turned Lovey into a real bunny now, and she is out driving her car to see her friends."

I stopped crying and hugged her, and she pushed me away a little and asked if I would come up onto the loft bed to help her "catch some fish" with a scarf decorated in stars tied to a stuffed elephant as bait.

We caught two goldfish and sixteen salmon.  We threw back the goldfish and kept the salmon in a tank in our boat and then I got out of the boat and swam to the kitchen to make some oatmeal with brown sugar and cinnamon.

And there was a sense that as she giggled to herself upstairs and caught several more salmon, that it was me growing up this time; that she was helping me.
Posted by Missy at 8:30 AM