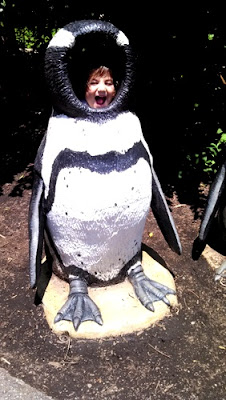 I thought the Erie Zoo would be super ghetto.  I don't mean that in the definitive sense of the word - where it could mean a nice place that is just really secluded and whatnot.  I mean it in the urban dictionary sense.  Not the gang ridden street violence definition, but the one where things are just trashed and dirty.

I knew the zoo was small and didn't have as many animals as say, the Pittsburgh Zoo or the National Zoo.  I expected horrible circus style tiny cages with piles of poop and iron bars.

I was pleasantly surprised by this zoo, and I would love to go again.

If we ever live in Erie (it's on the list), we will be members of the zoo for sure.

We packed our lunches early in the morning (you know, like 10 AM.  Which is as early as it gets for most homeschool types) along with some cash and some water and my handy dandy GPS (she's my friend on the road, I tell you; I think her name is Jennifer... we're close), and drove out of our campground and down the road to downtown Erie... and the zoo.

We passed the hockey rink and the local Y, and Maeryn spotted an excellent parking space just outside the entrance.

The ticket line was not long, but we ended up behind a woman who was purchasing tickets for an entire daycare center, so things took a little time at the beginning.  Good thing: I got to talk to some other moms from the area.  Our conversation went something like this:

Mom1:  Oh my gosh they hid another sippy cup!

Mom 1:  to her children No more hiding sippy cups!  That is gross!  Gross!  Can you say gross?

We laugh.  She tosses the sippy cup.  We have all bonded over our shared experiences with tots and moldy sippys.

So far, I've found that people in Erie are pretty awesome.  Genuine.  Friendly.  A dude at the Redbox helped Michael pick a movie.  He was pretty much a giant, covered with tattoos, long hair in a ponytail, wearing a "wife beater", super gruff looking - had lots of advice about How to Train Your Dragon and a few other well known kid selections.  Drove away in a mini-van with a ballet sticker on the back.

We got extra tickets to the carousel and the train.  I figured if they were torturing the animals, I could distract the kids with a merry-go-round ride and head out quickly with our train tickets.

We ate our lunches at some benches just inside the gate.  Made two potty stops.  And then ventured inside.


Yes, there were less animals, but all of the animals seemed looked after.  Clean habitats.  Interesting things for them to do.  Climate control.  Tons of information.  Zoo keepers hanging out in front of habitats in case you were interested in talking.  We witnessed giraffe feeding time and heard a lecture on white rhinos.  There was a cool playground with a lion's head to climb into and a bunch of kids to hang out with.  We had some pizza and ice cream.  We fed some Australian birds from Dixie cups.  We witnessed the cutest little orangutan baby jumping all over his dad and snuggling with his mom.  I learned so much from watching that little family.  Both parents were so tolerant and playful.  They helped each other when one was tired.  They rested together.  They hugged a lot.

I was sad to leave the zoo, to be honest.  We could have spent many more hours there, but we had to go...  that night Michael and I had a rehearsal.
Posted by Missy at 6:00 AM