Rehearsal on the Road

As many of you know, Michael and I have a date with the Samuel French Festival in NYC this summer.  We've been acting in Trish Cole's Field Guide to the North American Osprey for almost a year now.  We've attended a few festivals in the past, but this is the big one.  Sam French is one of the biggest one act festivals in the world when it comes to prestige and how much it will mean for the winners.  The top six plays will be published by Samuel French.  You theatre people get that.  It's a pretty big deal.

So even though we're on the road, we're in rehearsal.  We run lines, we think through things.  We work on our characters.  And this evening, we had a rehearsal with the writer.

Trish is a friend who is also an amazing playwright.  Only 30 of 800 submissions were accepted to Sam French.  Our rehearsal was in her hotel room.  Her niece, Christy, made the trip from Southern Maryland to Erie with her aunt to watch our kids.

We moved the hotel furniture all over creation, took the bed apart (quite literally), and screamed obscenities and random bird references through the hotel walls.  I am shocked Trish was able to keep her room after our two runs.

After rehearsal, we went together to catch another Erie sunset. 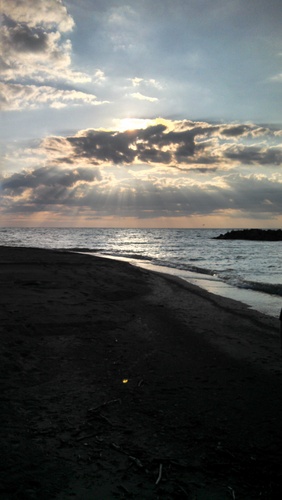 The sky was clear this time, and the night was beautiful.


After the sunset, Trish and Christy headed back to the hotel.  I treated the fam to some more Sara's.