Today starts a (perhaps) once-a-week (or so) column (or something) by the other half of the Adventure Mobile parenting team and the driver of our illustrious home, Michael. 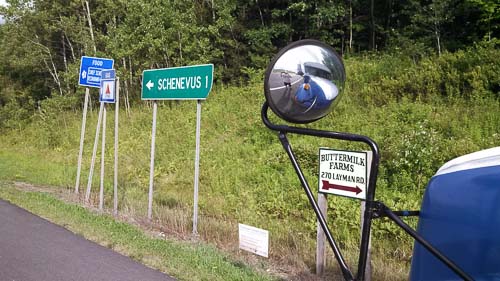 Our tale opens and closes during an otherwise uneventful trip from Ithaca to Albany, NY.  In my defense, I am still getting used to the turning radius of the bus and have yet to install a fresh water tank.  These things will become abundantly clear as our story unfolds.  You see, about 3 miles outside of Schenevus, NY, Jonah announced with much wiggling and bouncing that he had to go to the bathroom.  #2.  Now.

We have a bathroom on the bus, but it doesn’t work without water (flushing being an important part of the bathroom-using process, especially in a moving vehicle).  Since we have no source of water except our “street” connection while at campgrounds (at least for now), using the toilet in the bus was not an option.  So we got off at the very next exit, which promised two different locations that would likely provide the proper facilities.  We were incorrect.  We found ourselves driving through the center of a town in what was obviously in final preparations for a town parade: onlookers everywhere, traffic cones, fire trucks, closed streets, police directing traffic.  We trundled down the road with a groaning Jonah past the onlookers (who may have thought the parade was starting) and past the only gas station in town - a station large enough for four cars at most and on the wrong side of the road.  Stopping there would have meant blocking the entire station and maybe the entire road in addition to risking being caught in a parade.  I hoped we might find another candidate facility, but were directed onto a side street that emptied onto a country road.  Lots of cars, houses, horses, but no bathrooms.

We drove for about 5 minutes (Jonah bouncing and moaning) before I decided we needed to turn around and try our luck in town.  The only problem was there didn’t seem to be anywhere to turn around.

---
Now, when towing a car four wheels down (also known as flat-towing), you cannot back up.  Not even a foot; not an inch.  I’ve been told this from many places and knowing what I know of physics and car design, I’m not about to try it for myself.  That’s a might-need-to-buy-a-new-car kind of experiment.  So while I’m towing Sally, I try to make sure I’ve got enough room to turn around if the need presents itself.

Earlier on this particular trip we stopped to do a little hiking and to view a waterfall.  I think Missy blogged about this yesterday, so I’ll cut to the chase (even though it was awesome); we were done and needed to leave.  The parking lot looked like it might be a tiny bit too small to make the turn; instead of attempting it and getting stuck across traffic for 3-5 minutes while we unhooked the car (so I could back up to finish the turn), I decided it would be prudent to unhook the car first and hook it back up after completing the turn.  Wouldn’t you know that Billy made the turn without a problem and with a good 5 feet to spare.  I had worried unnecessarily.

Back outside Schenevus, NY, the day’s previous turning success proved to be my downfall.  I saw a large Y-type intersection that looked about the size of the day’s earlier radius, and I decided to go for it.

Now I’m a 45 foot long roadblock across both lanes of a main route into town with a tree at one end and the probable loss of my car’s transmission at the other.  And the parade was about to start.

Pause with me and image the following scenes transpiring simultaneously, in slow motion, with no sound: Jonah is bouncing in obvious distress, Missy’s buried herself under a blanket in the living room (to avoid detection), I’m running wildly out the door of the bus to unhook the car, and townspeople in vehicle after vehicle stopping to stare (like they had another choice).  Maeryn is happily watching a movie in her bed, but that’s where the film speed returns to normal and the sound comes back in.

So, I finally got the car unhooked, tow bar stowed, and the car out of the way.  This only frees up one lane, but it’s enough to direct traffic around, one lane at a time.  The road cleared, I’m able to back the bus up, get it turned and out of the travel lanes.  After extracting Missy from her blanket of embarrassment and after a few arguments (due mostly to my embarrassment), we were hooked back up and our way back to the interstate by another route.

When we finally found an appropriate spot for Jonah to, um, take care of business in the woods, he informed us he couldn’t do it; he was happy to watch the movie with Maeryn until we got to a better place.  In his defense, there was a small fiasco with a vision-blocking blanket and having to squat at the side of the road.

All in all, it was a … memorable trip.

For more information on our towing setup, see the pictures below.
Posted by Missy at 6:00 AM

This sounds EXACTLY like something that would happen to us. :(