While hanging out in Ithaca, NY, we saw many hats, bags, and shirts with this slogan: Ithaca is Gorges.  I got the play on words immediately, but I wondered what they meant by gorges.

What exactly is a gorge?

1. A deep narrow passage with steep rocky sides; a ravine.
2. A narrow entrance into the outwork of a fortification.
3. The throat; the gullet: The gory sight made my gorge rise.
4. The crop of a hawk.
5. An instance of gluttonous eating.
6. The contents of the stomach; something swallowed.
7. A mass obstructing a narrow passage: a shipping lane blocked by an ice gorge.
8. The seam on the front of a coat or jacket where the lapel and the collar are joined.
v. gorged, gorg·ing, gorg·es
v.tr.

1. To stuff with food; glut: gorged themselves with candy.
2. To devour greedily.
v.intr.

In this instance, I learned that in Ithaca, we're thinking about definition #1:  A deep narrow passage with steep rocky sides; a ravine.

And indeed, Ithaca is ripe with them.  Made from them... perhaps.

We'd been driving (or biking) into town the same way over several days, and each time we went to town I noticed signs for two different parks.  I was itching to visit, but no one ever seem up for it... until today!

It was evening, and we were all feeling a bit tired, but the air was just cool enough to have reprieve and warm enough to still feel like dipping toes into the water...  so off we went.  I heard there was a waterfall, and on the internet, it said you could swim in it. 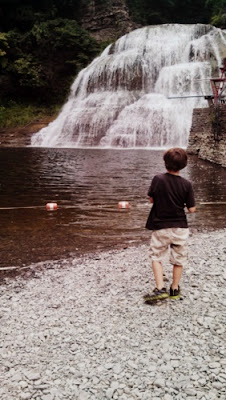 But not this evening.

Unfortunately for us, the water was too high on the bacteria side for swimming just now.  We ogled anyway and noted the high diving board (you can make it out in the top right of the above photo) that looked immensely thrilling, leading right into the base of the falls.  I can't wait to go back someday. 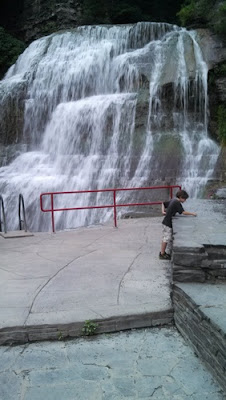 While there, several kid-types carved their names into the slate rock near the ladder for the diving board.  Jonah participated.  What he wrote is secret though, so if you want to see, you'll have to visit Robert H. Treman State Park and see for yourself.
Posted by Missy at 6:00 AM