The Bones of Our Ancestors

Way back in college I was required to interview several family members for a project in my Marriage and Family class.  These interviews were to be tape-recorded and then I was to write an extensive paper on the findings of my family history and where my family fit on several graphs and la ti da and so on.  I remember very little of my findings, but I remember much from the interviews - especially the interview with my late paternal grandfather: Thomas M. Evans (Pap).

He was a World War II veteran (Navy) and while he wasn't keen to talk much about what he did during his time in the Pacific, he did talk about courting my grandmother from abroad (they were high school sweethearts), writing to her daily and receiving several letters at a time as she wrote to him each day as well, but mail only came infrequently to the ship, and his hopes that they would meet again one day in Paradise.  At his house, there were black and white photographs of him in uniform, along with a portrait of my grandmother and she had signed it "Yours til the end of time" with her name.  These hung in the house's master bedroom upstairs even after my grandfather moved downstairs to the former guest room and long after my grandmother had passed way (she died when I was ~four).  Since the interview, I was always fascinated with these photographs, and any others I could get my hands on from the time before my dad was born.

Pap let me look through his favorite photo album, which included a multitude of snapshots from the 1940's, post war, and some during the war.  There were many photographs of my beautiful grandmother in vintage swimwear lying on the beach with Pap, who was almost always smoking a cigarette and smiling broadly.  Several of the pictures included their friends, who are nameless to me - but smiling brightly too and everything seems to be perfection.

There was one photo in particular that has remained seared in my mind since my first glance through the album in Pap's old TV room.  This particular photo was of Pap sitting in the seat of a huge machine gun.  He's got a trademark cigarette hanging from the side of his mouth, and he is shirtless and in cut-off shorts with bare feet.  His feet rest on the gun itself, and his eyes are sparkling: playful.  It was obviously taken by a fellow sailor while they were at sea, and then sent by post to my grandmother, who kept it faithfully in the album.  I wonder about that memory - about who took the picture, and why.  I never knew much about the life of navy sailors during the second world war.

And so in Albany, when someone said we could tour a naval vessel from this period - the only one left of its kind, I was interested, and to my surprise, Jonah was keen.

We paid a small price for admission and boarded The U.S.S. Slater with a young and apt tour guide - he knew everything about the ship and more - and I was transported back in time.

One of the first things we saw on the ship was the gunner's station - this was Pap's job... the gunner - and the gun - the very same gun from the photograph of "Tom" in his cut-offs.

And the guide invited Jonah (whose middle name is "Thomas") to sit in the seat, the seat from the photograph. 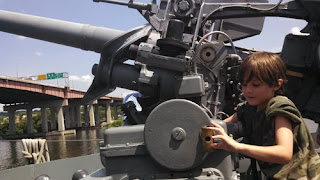 The angle was wrong to get the exact shot.  He isn't wearing cut-offs and of course he isn't smoking - but somewhere worlds collided at the moment he took the seat.

I knew Pap was watching, and I knew he was pleased.

We had an extensive and engrossing tour, and throughout I couldn't help but picture my grandfather, a young man (too young to sign up for the service, but he and some friends lied about their ages and were put through in spite of it), his lovely girlfriend at home and him in the Pacific Ocean drifting - gunning down enemy planes, swimming off the back of the ship, washing down the deck in the petrifying sun, sharing a bathroom, sleeping in a swinging hammock of a bed, carrying mess trays down ladders to a hall full of hungry sailors...

I could see everything, imagine him bounding down the ladders, swinging from the headposts, tearing open his mail...

The officers from the Slater donated their personal affects to be displayed in their rooms, and one of them had a portrait of his wife on the desk.  Black and white.  Signed "Yours til the end of time"...  I smiled and was warmed.

Life has ways of being beautiful...

And things have ways of coming full circle. 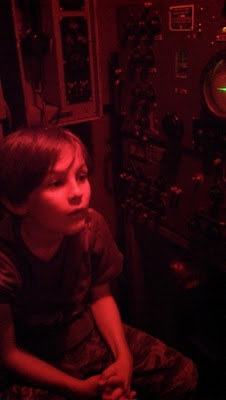 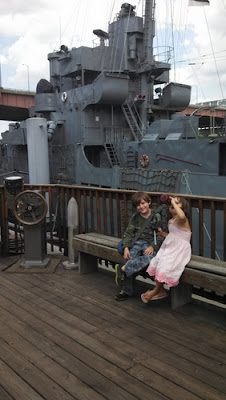