You all can compete for this title if you want to.  I am already quite certain that my husband is the winner - so it will only be for second place ;)

The Kids' Festival was a bust.

I'm not sure there could have been a more complete and total bust.

Jonah continued to hand out invitations well after Maeryn came back to the bus to make preparations.

(During this time, I was at a much-needed flow yoga class in town - sometimes, a mom just needs some yoga.)

Maeryn set the table.  She put out Oreos.  She put out glasses and drinks.  She decorated with hand-made paper decorations and labeled different areas of the bus.  She put a sign on the door that said "Open".  And then she waited.

And Jonah came back with the good news that many parents had said their kids could come.

Maeryn couldn't understand: "Why would you say you were coming if you really weren't coming?"

Why would you say that???

I tried to convince her that it was time to give up now.  It was late.  Maybe she could take a nice warm shower.

"Maybe they will still come.  They festival is until 8:30.  There is time for them to come."

And Maeryn began to cry.

There was no consoling.

Jonah handled things okay.  He was disappointed, but buried his head in a video game.

Maeryn could not understand why no one would come.  She had worked so hard.  She had prepared so well.  It was a party any five year old would dream of!  And yet...  no parents stopped by with their children.  All those people who said "maybe" really meant "no".

And it was a hard lesson.

I thank God for my husband.

Who when holding and hugging and wiping tears is not enough, thinks of canning everything and running to jump in the pool. 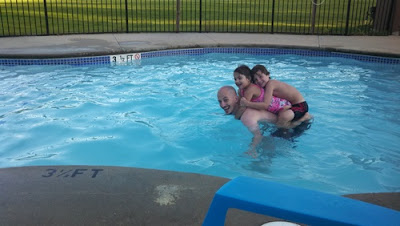 It's about time we use some of these $51/day amenities.

Oh Missy...I am heartbroken for Maeryn. Why WOULD they say yes? :( We would have come. <3!

PS ...I think you are incredible with teaching your kids. Amazing. You embrace the lessons the rest of us run from. I love you.

I feel so sad for Maeryn! I would have come too! Thanks too for reminding us that maybe should mean MAYBE.