That Game is Rated "M" for MATURE 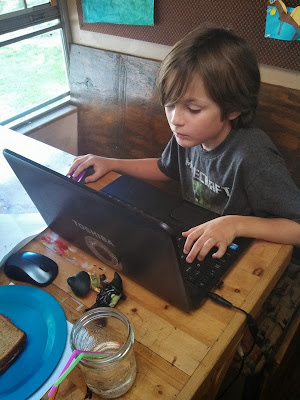 Way back in Maine, Jonah made friends with a boy his age and they spent a good portion of their days playing video games.  Most of the games were played in the friend's camper - they had air conditioning and we did not, and some of those days were hot!  I heard tid bits of what was going on.  I heard which games they were playing and they were all games with which I was familiar and knew that the rating was acceptable (the rare T for Teen game + many E for Everyone games).  I had reviewed the T for Teen games and knew them to be "okay".  The blood was blood but belonged to aliens, for example...  And then Jonah came back to the bus especially excited.  He had been introduced to a new game.  The "best game he ever played".  It was called Skyrim.

Some of you are gamers and are familiar with a much wider array of games than I.  Foolishly, I expected that this game was also an E for Everyone.  The boy's dad and younger brother were in the camper and we had met them, talked with them, and deemed them "safe".  Jonah talked about slaying dragons avidly while I casually googled the game.

It was rated M.

I tried to keep myself under control while my brain raced ahead to what my son must have seen on the screen in the strange camper.  I suddenly felt a wash of irresponsibility.  I held myself back from telling Jonah he could never ever play with this friend again.  Instead, I went to Common Sense media.  This was likely a bad idea.  I don't recommend reading their review.

I felt like I needed to have a hard talk with Jonah about what he might have seen.  I mentioned sexual content and gore.  He looked confused.

"There was a beheading, and that was pretty bloody, but I didn't see any sex, Mom."

"It says here that the game contains some sexual scenes and some violence and I'm not sure I'm comfortable with you playing this game."

"Mom, I didn't see anything like that.  I really like this game.  I want to save up my money and buy it."

I gulped.  No.  There would be nothing with an M for MATURE rating in this bus.  No.  I needed to put my foot down.  Unschoolers or not...  MATURE games were bad.  I would be the. worst. mom. ever if I allowed this.

"I will need to do a lot more research on this game, Jonah.  I'd prefer you didn't play it at your friend's house anymore."

He was disappointed, but agreed.  The rest of our time there, the boys played outside.

Meanwhile, I felt hot all over just thinking about what Jonah might have seen.  I hoped he simply wouldn't mention the game again.

But then last night Jonah said something again:

"Mom, I think I saved up enough of my allowance to buy Skyrim."

I almost spat my tea at him.

"Jonah, you know that game is rated MATURE."

"I know, Mom, but you said you would research it and you never said I couldn't get it so I saved up my money and I think I have enough."

But he'd caught me.  He was right.

"Give me some time."

And I took the time.  And he sat next to me for the duration.

I researched Skyrim.  I read the reviews.  I read the Wikipedia article.  I watched the trailer.  I read all the angles and sides of the story.  And...  I thought the game seemed... just fine.  Some fantasy gore.  Some sexual scenes that could happen if the gamer chose a particular path...  And I posted on an unschooling forum looking for opinions on the game.  My unschooling friends never fail.  They all asked their kids (the ones who already had the game) and the kids gave rave reviews.  Explained what they'd encountered and what it was like.  And ages 8 - 18 all recommended the game highly as one of the best games they had ever played.

And so we gathered our monies.  And we headed to Walmart.  And we bought Skyrim: Rated M for MATURE.

I felt a little horrible as I paid for the game and the clerk handed the bag to my nine year old son.

When we got home we sat down to experience Skyrim.  Together.

It is a beautiful video game.  And I don't really like playing video games.

I was astounded by the accuracy of the imagery, the gorgeous landscape, the three dimensionality of the programming.  I had purchased art.

And Jonah has been playing for hours each day.  And I'm not sorry for purchasing the game.  In fact, I recommend it to kids whose parents are willing to hang with them and discuss things.  And I have learned the valuable lesson that no one else can say what is okay for my child.  No one knows him better than me.  And I am capable of making hard decisions.
Posted by Missy at 6:00 AM

I love this observation: "I had purchased art". Beautiful account all around, Missy.

Thanks so much, Gretchen!

I hear a lot of people deride video games as being awful and a waste of time, but don't actually take the time to sit and play with their children. Games aren't a replacement for communication, they should provoke communication.