We hauled to our next campground all day.  We were staying about ten miles outside of Key Largo on the mainland at a small RV park that was also a marina.  The kids made friends with two boys who live on boats full time.  They found fish and dipped their toes into water that was supposedly inhabited by black tipped reef sharks.  We provided a giant bin of LEGOs that remained outside the door of our bus and basically scattered all over our campsite for the few days we stayed there.

It was a good place to be near the Keys.

After meeting the locals, we hopped back into the car and drove straight down to Key West.

I had visions of checking out the Farthest Point South and then having dinner in a nice restaurant.

When we arrived at the Point, Michael stayed in the car to finish up some work stuff (I drove) and feed the meter.

The kids and I galloped out to the Point.

There were tons of tourists milling about from all over the world.  All chattering, taking pictures, discussing America.

Once we'd seen the point Jonah asked me if he could go into the water.

There was a tiny beach outside a restaurant that said "Public" and there were people lounging on beach towels amidst the restaurant's sparse outdoor tables.

I didn't especially want him to go in the water.  He was wearing a t-shirt and jeans.

And...  I really wanted to go out to a nice restaurant.

"You don't care if you're wearing wet jeans all night?  What about going to dinner?"

And so he did.

He waded in up to his neck.

A woman came up to me in a black bathing suit.  You can see her and her husband in the background of the basket weaver picture, above.  She smiled and pointed at Jonah and said, "I understand him."  I smiled at her.  She asked if she might take a picture of Jonah as he splashed in the waves.  Of course she could.

Something about the freedom of childhood, the need for water on your skin...

Of course Maeryn was busy getting wet as well.

When Michael came down to the Point after wrapping up at work Jonah asked the ultimate:

Why the heck not? 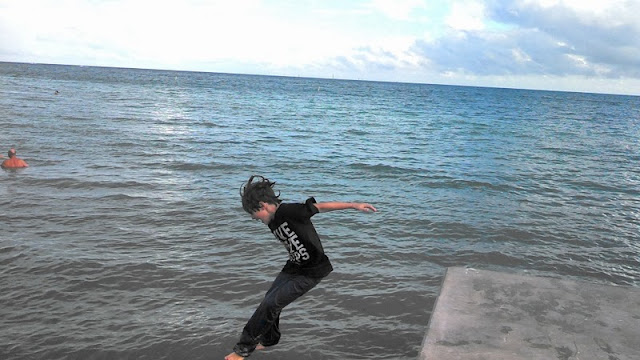 Why the heck not?

So dinner was Checkers in a grocery store parking lot.
And you know what?

I'm okay with that.