Lessons From the Skatepark? 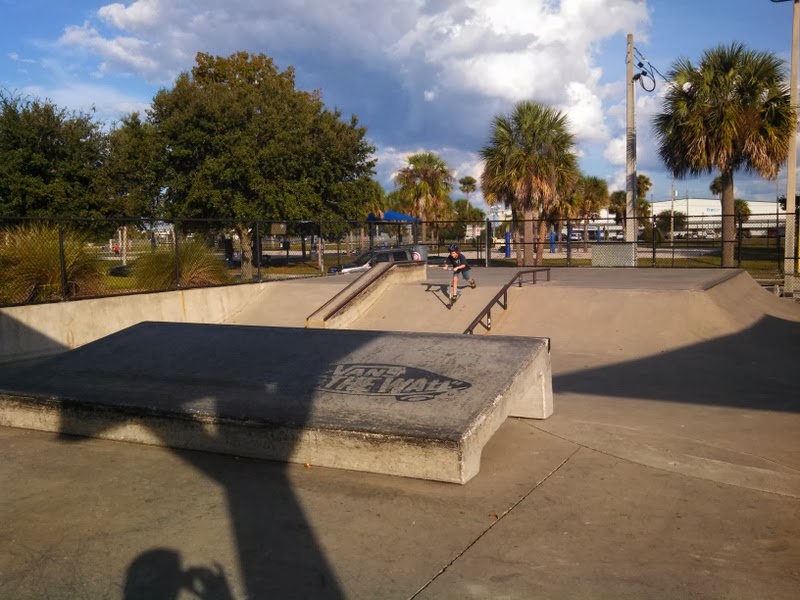 Way back in Burlington, VT, Jonah started riding his scooter seriously.  He'd been dabbling in skateboarding, but never quite got the hang of it the way he'd like to, but scootering worked out.  He made some friends with older skaters who taught him some moves, and he got pretty confident (we'd been parked next to a small skatepark there).  Though he hadn't been able to get back on the pavement since then, he was still expressing interest, and finally he point blank asked me if I would please take him to a local skatepark while we were in Orlando.  We had a few days between our arrival at the campground and our planned excursion to Universal Studios, so I really couldn't refuse.  I looked up the closest park, and we packed up the helmet, scooter, and skateboard (just in case) and drove downtown.

This skatepark was much larger than the one in Burlington.  The ramps featured in the photo above cover only about a quarter of the entire park.  It was the most legit skatepark I'd ever seen - music was blaring - you had to pay a small entry fee (Jonah paid it out of his own allowance), and there were people of all ages skating - including a few grown men, their helmet straps dangling unbuckled at their chins.

I parked myself at one of the picnic tables in the center of the concrete jungle and tried to read a book, but I was too busy focusing on Jonah.

There are lots of unwritten rules at skateparks, and I didn't know them.  I knew Jonah didn't know them either.  I reminded him to try and stay out of the way of the skaters, but I could tell he was frustrating some folks on the ramps.  I Googled "skatepark etiquette" and ran through a few obvious things with him: staying "off the lines", going in the same direction and along the same path as other skaters, taking turns on the ramps.  It was all overwhelming for both of us.

Meanwhile, a family showed up - a dad and four boys, all with skateboards.

I felt sort of inadequate, having no clue about anything to do with skating and this awesome dad hitting the half-pipes and ramps with his sons with all the ease of an expert coach.  They were doing jumps and flips and all sorts of tricks.  Jonah watched them with not a little envy.

"Mom, can I go get my skateboard?"  I nodded and went with him to the car to pull it out of the trunk.  I suggested that he rent a legit skateboarding helmet from the pro-shop, and he did (he had three extra dollars in his wallet - just enough to make the exchange), then got in line at one of the ramps with his board.

I was pretty certain he would be able to drop-in and make it to the other side.  He'd been practicing in church parking lots and on the paved roads in campgrounds...

He dropped-in and fell immediately: a huge wipe-out.  He flew face-first into the cement and his board flew up and over the adjoining ramp.  Everyone stared.  I felt the blood rush to my face for him.  I waited a minute.  He didn't cry, just stared around at everyone staring at him, then picked himself up and got his board.  He came up and sat next to me.

"Why can't I do it?  Look at those guys.  It's so easy for them.  That little boy is like Maeryn's age and he can do jumps and everything."

I nodded.  Unsure about the proper approach.

"It looks like they come here a lot.  I think they've probably had a lot more practice than you have."

"Maybe you could do some practicing just riding the skateboard before you try the ramps again?"  He nodded that he would, got a drink from the drinking fountain, and went off alone on the flat area of the park to practice.  He had a little trouble just balancing, stopping, and getting the thing to go.  It was hard to watch and have no idea how to help him.  I watched a couple of YouTube videos about how to skate.  I felt sorry that we didn't have a house with a driveway and some homemade ramps so he could practice in the privacy of his own front yard instead of in front of all these kids who had been skating since they could walk.

More people arrived - teenagers this time.  No one was mean to Jonah but you could tell he was a little bit in the way.  He went slowly, slowly back and forth, back and forth, and the other skaters went around him.  I told myself they had all been there once - right where he was - and in light of that they should show mercy.

Fifteen minutes later Jonah came back to the picnic table.

"Do you think you're ready?"

I nodded and he got ready.  No one else was on this particular ramp, so it was a good one to try.  I prayed that he would just stay up, just make it to the other side.  I wanted him to have that feeling of triumph I'd seen on his face so many times before:  snorkeling, mountain climbing, riding his two-wheeled bike...

He dropped-in.  It was looking so much better this time!

He made it to the bottom of the ramp... and then the board flew out from under him and he flew backward, landing square on his bottom, and the board floated up and down the opposing ramp.  He started that howling cry - the one where he's both hurt and mortified and he hasn't quite learned to hold it all in.  The family with the four boys stopped and stared.

This time I got up and ran down the ramp.  He wasn't moving, just howling.

"My ankle is hurt."  he said, between howls.

"Okay, okay, let's get out of this."  I let him hold on to one of my arms while I grabbed his board and carried him and the board up the ramp and out of the pit.  He was still crying.  There was still an abundance of staring.  I wanted to scream "Okay, we're leaving!!!!"  but I held it in.  I wished they made skateparks for beginners.  Why did no one offer to help this kid who obviously wanted to learn?  Why didn't someone at least get his board so I could carry him out unencumbered?

The workers in the pro-shop waved as I dropped his helmet on the counter and we packed it up into the car.

"I don't want to go to a skatepark ever again, Mom."  He said, staring out of the window as we drove back to the bus.  I didn't really blame him.

"You don't have to.  But I don't think you should give up.  Maybe practice a little bit more by the bus before we go to another skatepark."

"Maybe I should stick to my scooter."

"Maybe.  When we get a house we can build you some ramps and you can practice that way at home."  He nodded.

I helped him up the steps of the bus and we got a bag of frozen corn to ice the gently swelling ankle.

He didn't want to talk about the skatepark.

And that was okay.

I didn't know exactly what to say.

I helped him put his shoes out for St. Nicholas Day and helped him into bed that night.  He was quiet.  I hugged him tight.

"I'm proud of you for trying something so hard.  I would have been too embarrassed to try."  He smiled and hugged me back.

And I still don't know if I played that whole situation the right way, or what would have been better to say, or what I would do differently next time.  I just know I love that boy and I'm proud that he tried and I wish that people at skateparks would help the kids who don't really know what they're doing.  And that they would post etiquette rules on the walls.  And make a beginner's area and mark it - like a bunny slope...  And I'm thankful the ankle was better in two days.  And that the next morning we had plenty of candy. 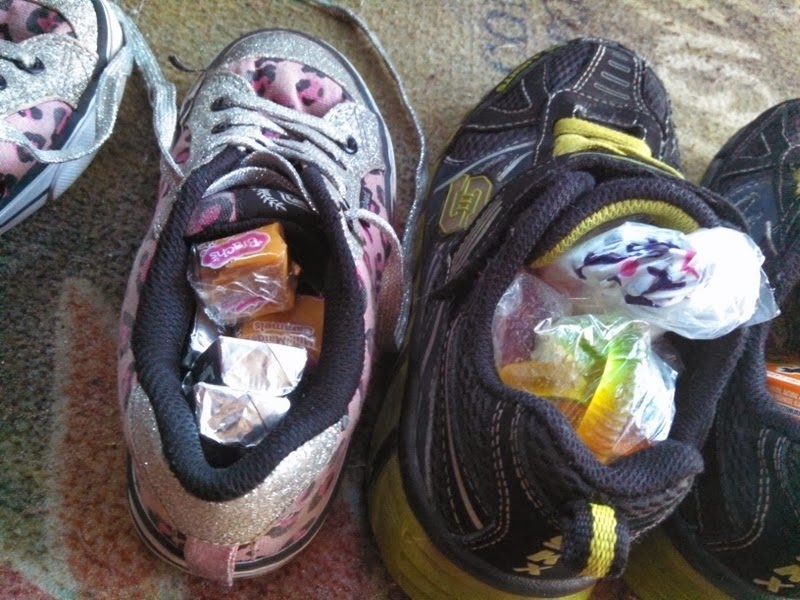