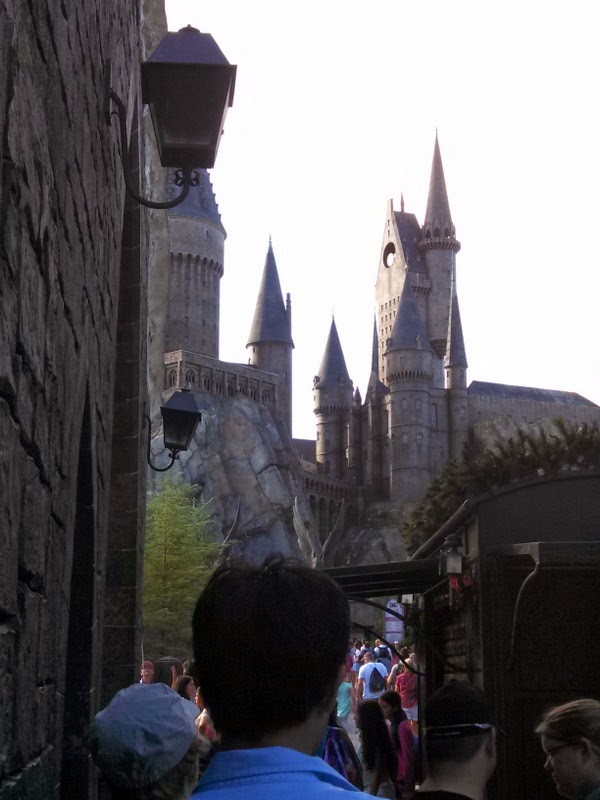 Today we crossed yet another item off of our trip bucket list.  This was one of Jonah's, and I admit I was excited about this one too - maybe more than he was!

The Wizarding World of Harry Potter at Universal Studios: Island of Adventure

I have never been to Universal, but I had done my homework and I knew that when we arrived we needed to go straight to the Wizarding World and to Ollivander's wand shop in order to beat the crowds - and so that's what we did.  But slowly.  Much. more. slowly. than I'd hoped.  Because Maeryn was "tired and didn't want to rush".  So it took us thirty minutes from the front of the park to the Wizarding World... and the line was a little longer than we'd anticipated.

And Michael and I gave one another pep talks about not being grouchy because Maeryn is five and has never ever done something like this and how the heck is she supposed to understand about beating amusement park lines if she's never even been to one?

And we stood in the line for forty-five minutes.

It was so cool and totally worth it.

We all tried to check our attitudes.  It was a lovely day, and a young day.  Plenty of time to see and do and experience everything.


We toured Hogwarts and rode the Hogwart's Ride (I know it has a real name but let's be honest - it's just the ride inside Hogwarts).  Maeryn couldn't ride because of the height restrictions, so we did the Child Swap - which is such a cool option - and Michael and I took turns riding while the other waited with Maeryn in a neat little room with Harry Potter and the Sorcerer's Stone playing on a flatscreen TV on the wall.  The tour of Hogwarts was truly the best part of the ride - talking portraits, Dumbledore's office, holograms of Harry, Ron, and Hermione in the Defense Against the Dark Arts Classroom -  you can actually go through a separate line if you only wish to tour the castle.  We did this near the end of our Universal day so we could see everything a little more closely. 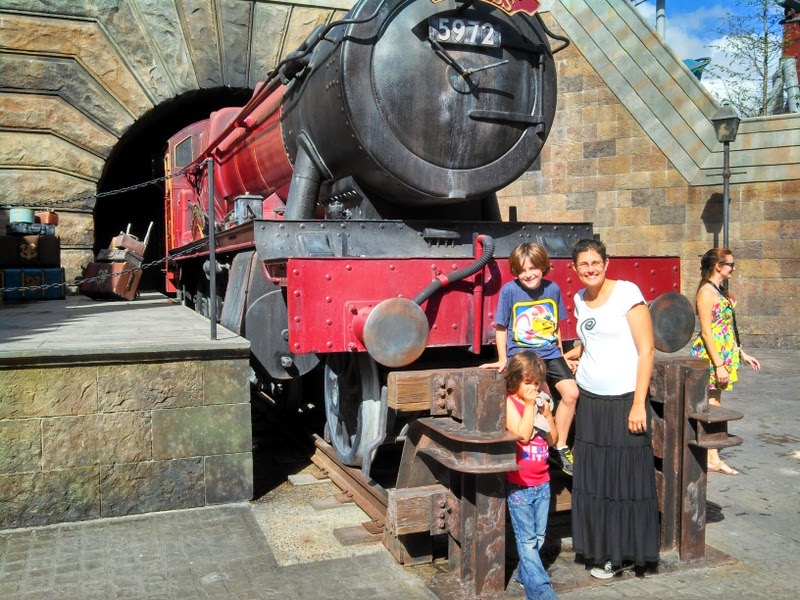 We were lucky and the longest we stood in line all day was at Ollivander's.

After lunch at the Three Broomsticks (complete with Butterbeers all around) we meandered through the rest of the park, counting everything else gravy now that we'd done our bucket list items.

The kids made it clear that they did not want to ride any rollercoasters, which was fine with me, but Michael was a little disappointed.

Jurassic Park was close to Hogsmeade, so we made it our next destination, which was fine... 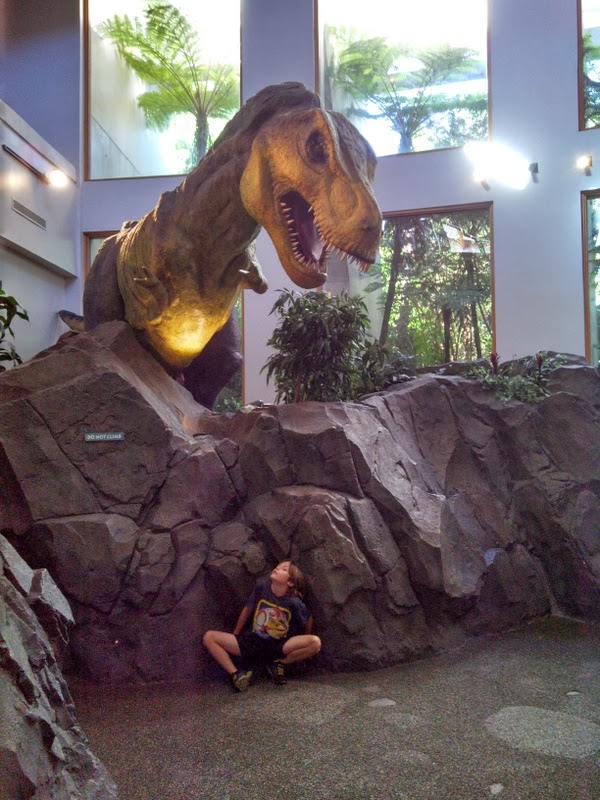 And totally child appropriate (we watched a baby dino hatching and played some crazy fossil games and controlled robotic T-Rex heads complete with sound effects), until we decided to ride something.

There was this ride that looked like one of those raging river rides - you know the ones - you hold onto the big wheel in the middle and get soaking wet and splash and bump along and then you get off and get back in line again because the day is hot and the ride was awesome.  I thought the kids would love it... plus dinosaurs, right?

It couldn't be that aggressive, because Maeryn was allowed to ride, and the Hogwarts ride was truly not that bad.

So we got in line.

And when we got to the front, I saw the cars and had some misgivings.

It didn't look like a raging river ride...  it looked more like one of those log jammer rides... the kind with the big drop at the end.

I thought about turning back right then, because I knew the kids didn't want rides like that - it was the very reason they were refusing roller coasters - they didn't like that feeling where your stomach drops out of your head.  I'm not a huge fan either.  But then I thought - hey, I liked these sorts of rides as a kid.  Maybe it won't be that bad.  I mean, Maeryn is allowed to ride it.  It's probably not a very big drop at all.  It's probably small.

And we got on the ride.

It was pretty tame at first - going through neat little swamplands with raptors and long-necks and whatnot.

But then we went up.  Up.  UP a hill.  The kind where you come out of the water and rise up a track.

And things got dark.

And it was high.

And Maeryn is no fool.

She began to cry.

Too high.  Much higher than any other log ride I had ever experienced and I have experienced many a log ride.

There was a tiny dip early on, and I hoped that meant the end drop would be tamer than I feared.

Not only was there a giant freaking T-Rex at the top of the drop - you also couldn't see how big the drop was because you were inside a building.  You had no idea when it was coming or how long it would be and holy cow it was the biggest baddest most terrifying drop ever.  The kind where you go down and you think you ought to be at the bottom but then you keep going.

And Maeryn and Jonah were both screaming and I felt like the worst Mom in the history of the known world.

Maeryn didn't want to go on any more rides.  Ever again.

I have never felt so bad in all of my parenting life.  She was definitely scarred for life.

Jonah recovered quickly.  But Maeryn was scarred for life.

We headed immediately to Seuss World.  Because how could anything be all that scary in Seuss World.  And we went to the carousel.

And then Maeryn and Michael got off.

Because Maeryn was afraid there would be a big drop.

"She is scarred for life and is never going to ride anything ever again.  I've ruined amusement parks for her forever.  I am the worst. mom.  ever."

Before I could go on, Michael sent Jonah and me away to ride more things.  Which we did - all of them wild and fun.  And he stayed with Maeryn.

After watched it go around several, several times... she rode the carousel. 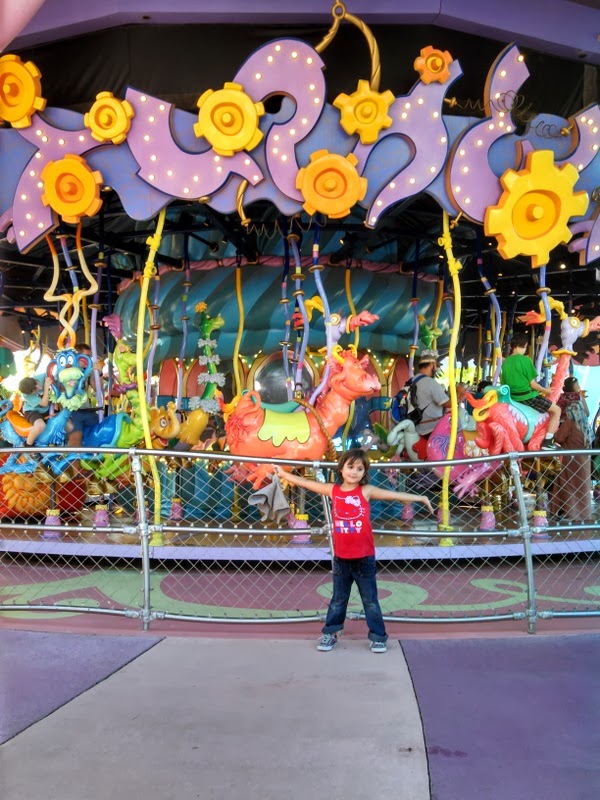 And was pretty excited about it.

She even rode it a second time.

And she rode One Fish, Two Fish and laughed when water sprayed her dad.

And I breathed again.

She still refused to ride The Cat in the Hat Ride, though Jonah and I rode it and laughed and laughed.  And we all rode Spiderman and took turns waiting with her at the Kid Swap (it was my favorite ride).  But at least she had gotten back on the horse, so to speak.  And I had learned to ask the convenient person standing at the beginning of the ride lines "just how intense is this ride?"  I knew those people were standing there for a reason.  They were always honest and happy to oblige.

Jonah and I saw a show while Maeryn ate a hot dog and French fries.

Then Jonah ate.  And we went back to Hogsmeade because we'd heard it was really cool at night. 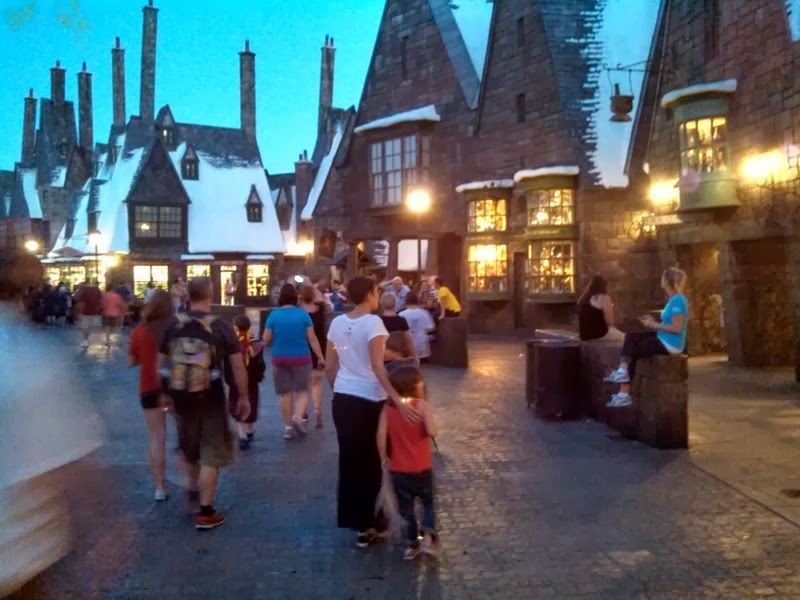 We mosey-ed through Zonko's Joke Shop.  The kids wielded their wands.

And we made an executive decision to hit up Hard Rock Cafe on the way home.

An excellent decision, if I do say so myself.

Michael and I got veggie burgers.  And Jonah got chicken fingers and fries.

And Maeryn got this: 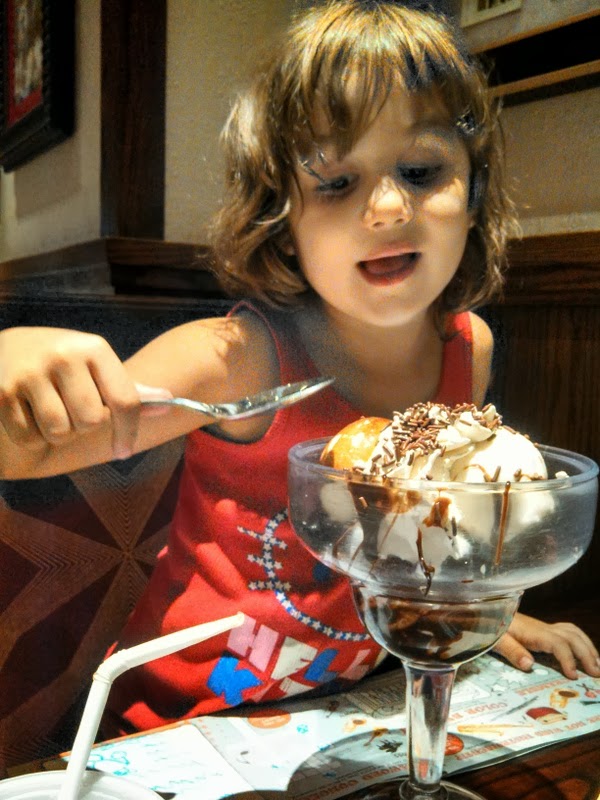 The waiter laughed.  She ate about half of it and offered the rest to Michael and me.

We finished it.  And marveled that we were sitting next to Bob Dylan's guitar.  And hugged one another and held Maeryn's hand.  And skipped back to the bus for the night.
Posted by Missy at 6:00 AM