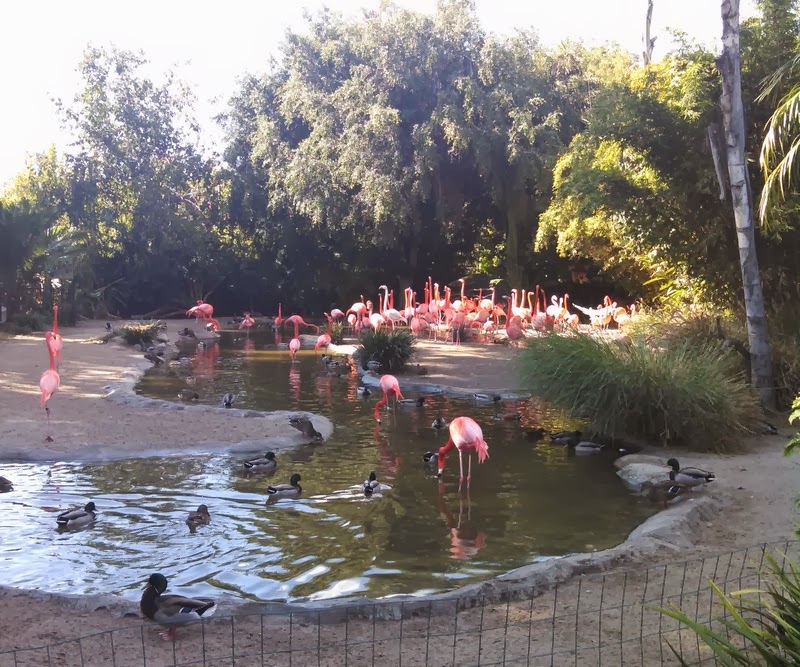 But it really is an amazing zoo.

Pack a lunch so you don't have to buy the food there... because... oy... you thought the tickets were expensive???

Anyway, those negatives aside, we had a brilliant zoo day.

Michael had to go into town to sign in to his work internet (he has to do this once a month), so he dropped us off at the zoo entrance and went on his merry way while we went on ours.

We didn't even begin to see everything the zoo had to offer.  There simply wasn't enough time.

If you go, be sure to get a two day pass.  It's absolutely worth it.

We didn't do this, but we still saw a ton of spectacular sights.

I got a zoo map at the entrance and we sat on a bench to talk through our day.  I asked each child to choose the things they most wanted to see, and I decided to make an effort to see at least those things, even if we didn't get to see anything else. 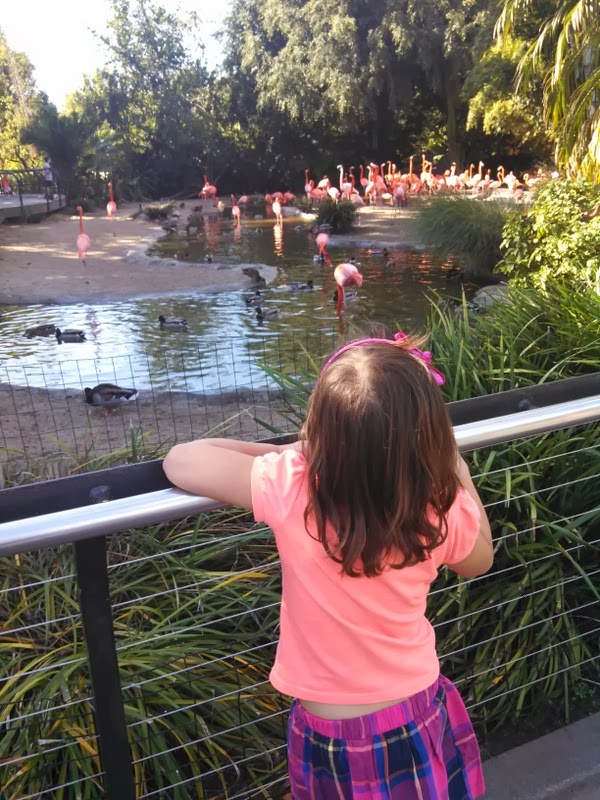 The flamingos are right at the entrance.

This is one of several sights the kids would have taken in all day long if they could have.  It was sad and hard to move them along from place to place, but they had things they said they really wanted to see, and I was trying to help them do that.

I think in the future we won't stop to look at the map and talk about what we want to see, we'll just move at our own pace and take as long as we'd like at each place without thinking about what we might be missing.  It would be more up their alley to take in things deeply instead of so broadly.  I'm still learning about things like this as a mom.  The learning curve continues to get steeper and steeper.  I think that's normal.  That's just parenting. 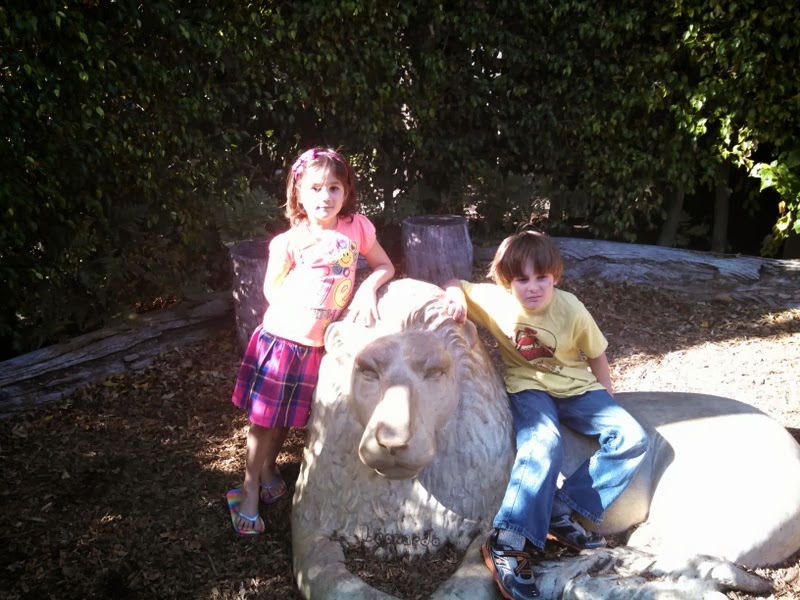 Jonah wasn't sad in the lion picture, but pretending this was actually his lion, and they were having a very serious time. 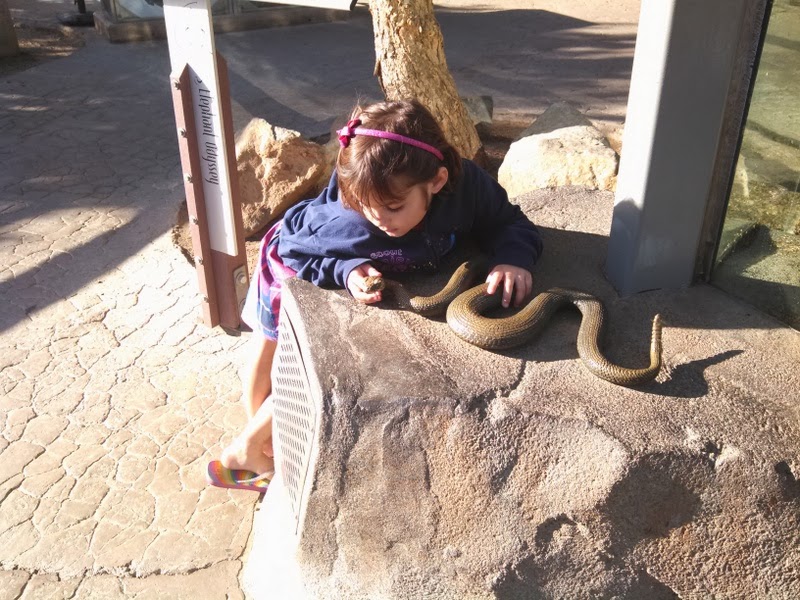 Maeryn adored all the statues.  There were hundreds of them. She pretended to be a veterinarian and take care of each one's many injuries.  If Maeryn planned the itinerary, it would have included statues only.  A giant exploration of statues and their ailments.

I know I said to get the two day pass, but we could have spent months at the zoo.  Both kids just want to get in as deeply as possible, watch as long as possible, and observe as much as possible.  It is hard to do things with one parent and both children, as they have such different interests and want to stay at different places longer.  If possible, I'd like to separate next time we go to something like this, so that each of them can do the things they enjoy at their own pace, without worrying about leaving someone behind or running too far ahead. 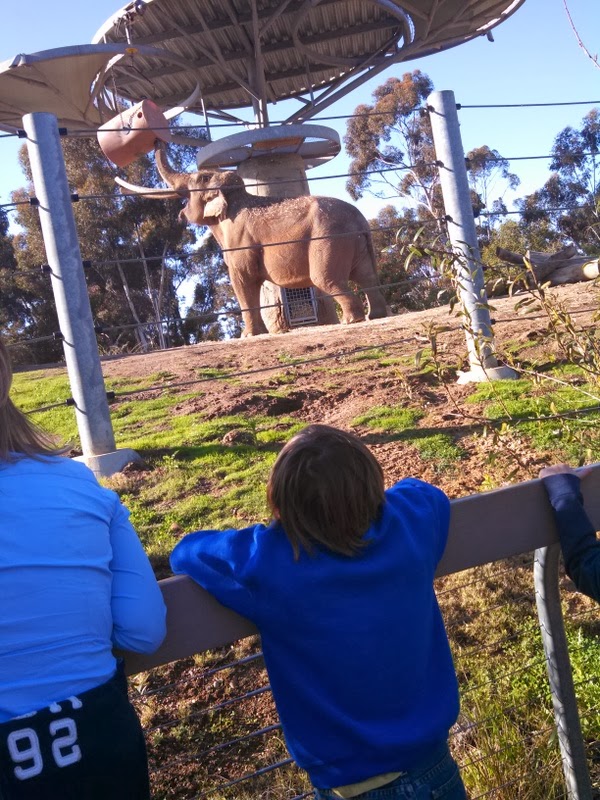 I was most excited by the elephants.  They are such magnificent creatues, so intelligent and interesting.  This one was eating hay from the plastic barrel in the picture above. 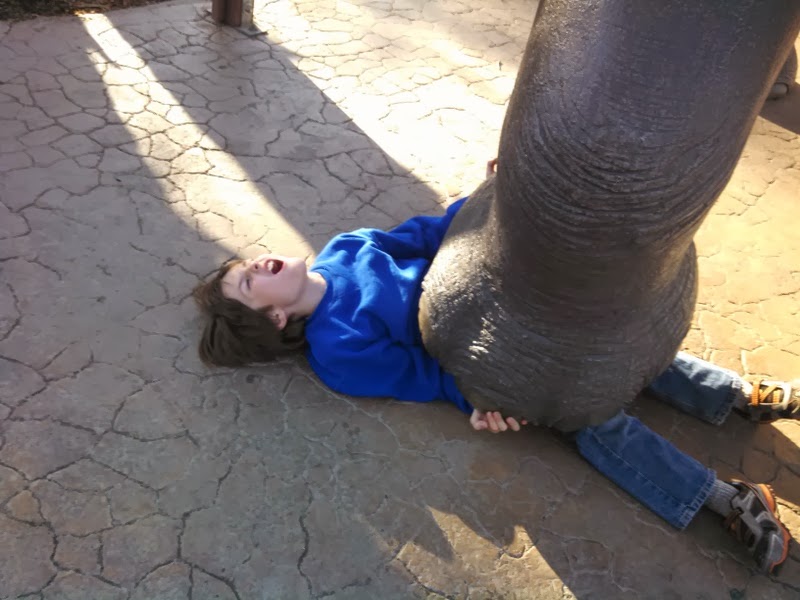 Oh, I forgot to mention - there was an elephant stampede and Jonah was actually trampled.  I had the presence of mind to get a picture. 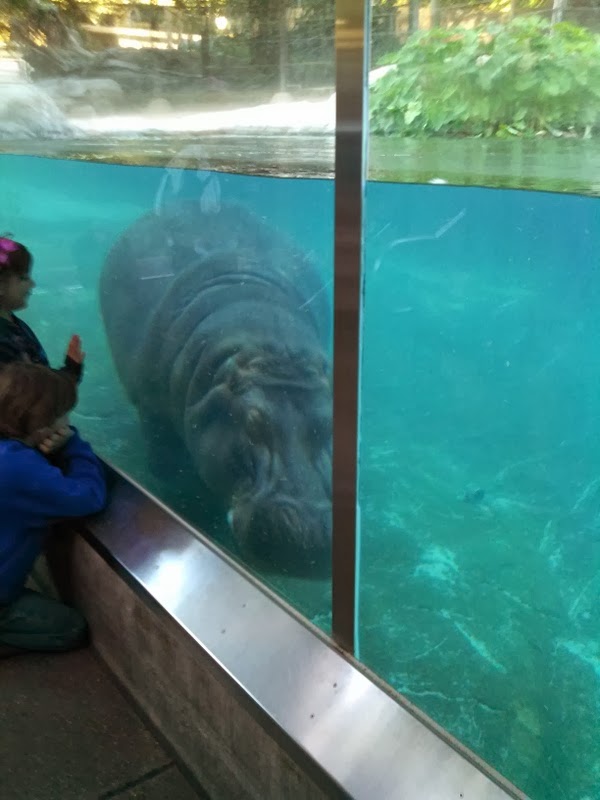 The hippos were elegant.  We watched them for at least ten minutes swimming in their pool. 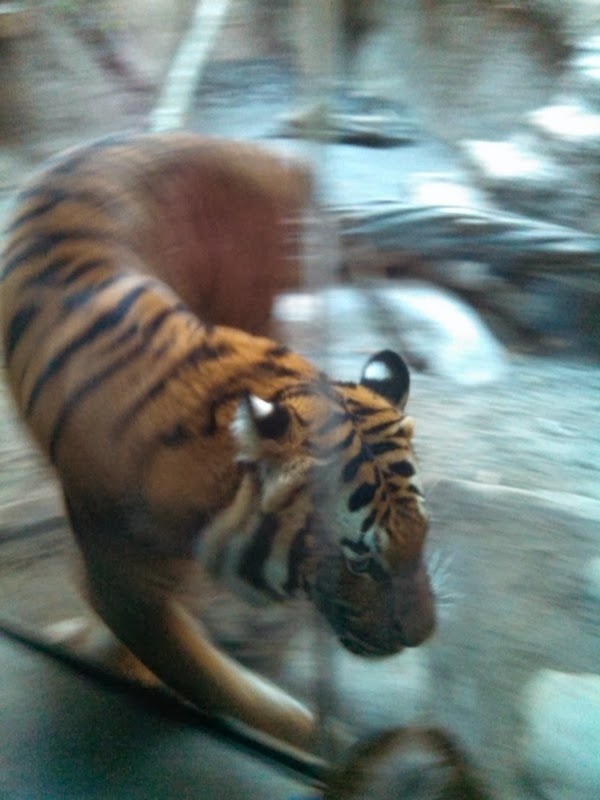 The tiger was one of the things on both kids' lists of things they definitely wanted to see before we left.

The behavior the tiger is exhibiting above is actually quite terrifying.  It's predatory instinct has been triggered and if it could get to them, it would likely eat the child with whom it is currently making eye contact.  We learned about this at the Desert Museum in Arizona, when the park ranger asked Maeryn and Michael to step away from the glass near the mountain lion, as it was becoming agitated, and small children would be on the menu if possible.

That said, tigers aren't man eaters unless they're super hungry.  We don't taste that great.  The problem is that many children in front of this tiger stooped down to get on level with the big cat - the stooping is what triggers the cat's instinct.  It kills with a bite to the spine.

On a gentler note, we also met the chimpanzees on our way out of the park.  Jonah was fascinated by their human-like characteristics, and sat a long time with his hand pressed against the glass - a young chimp on the other side pressed her hand against the glass too.

No, I didn't get a picture.

We were leaving, and it was maybe too beautiful.

Love this post. I feel like I was there with you. What a great day...and not in the we had a great time kind of way, but in the we were in another world kind of way. SO cool.