I had not been back since I was around seventeen.  I couldn't WAIT to take my own children to a place that held so many fond memories for me.  Idlewild Park was voted the #2 park for children in the WORLD for 2010.  I'm proud to say that it resides in the Laurel Highlands, my childhood home.

We arrived at the McKinley's on Thursday night, latish.  Both Sam and Ben (their kids) were already asleep.  Jonah and Maeryn crashed in Sam's room on the floor and Michael and I grabbed couches in the living room.  It was so nice to see such old and dear friends.  I've known the McKinley's since long before they were married with children - I met Adam fifteen years ago in crafts class at Richland High School in Johnstown, Pennsylvania.

The adults got to catch up while the kids slept, and in the morning Mandy and I ran some errands and grabbed some grub to pack for lunch while the men stayed home and got showers and played Wii with the kids.  We packed lunches, piled into cars, and headed for the Park.  I was pretty much giddy.

Michael had never been to Idlewild and I was looking forward to sharing it with him just as much as with my children.

We hit Jumpin' Jungle first.  I so highly recommend every part of this park to anyone who can get there.  We got tickets for $22 per person and Maeryn was free - just fyi.

Jumpin' Jungle is a playground on steroids.  Rope swings, zip lines, massive cargo nets, super slides, and a huge ball pit are just some of the wonders that are Jumpin' Jungle.  It was my favorite part as a child.  I remember my dad helping me up the cargo net, being so scared to climb over the edge at the top...  I remember that there WEREN'T people at the bottom making sure no one died back then...  ha!  Now there are safety rules and such, which is probably for the best... 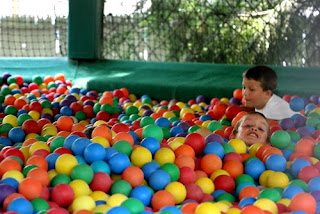 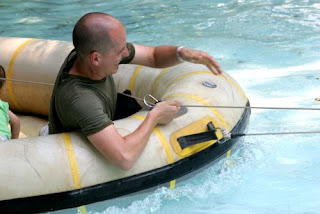 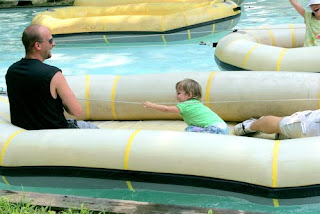 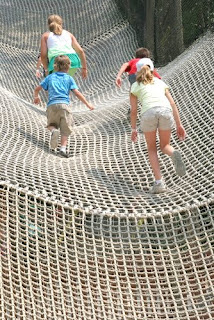 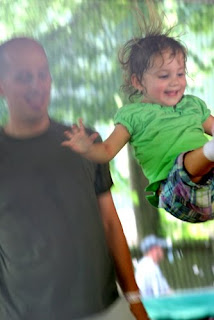 After getting SERIOUSLY sweaty at Jumpin' Jungle, we rode the log ride, which didn't exist thirteen years ago.  Maeryn couldn't go - she was too short to meet height requirements.  She was pretty bummed and there were lots of tears, but we made it through and Daddy got lots of fun pictures! 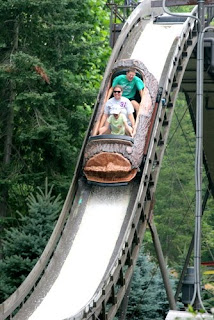 The log ride was fun, but we did NOT experience nearly enough water fun, so we headed to the Soak Zone - a waterpark within the amusement park complete with waterslides, a pool, a pirate ship, super sized water guns, and a spray park.  Back in the day, it was a pool and a couple of waterslides.  There have been significant upgrades and the best part was - I got to take my kids there!  Often when we visited the park during my childhood, we skipped the Soak Zone.  It was totally worth the extra work of getting the kids in bathing suits and slathered in extra sun screen!  Jonah tried every waterslide and proved himself a true little swimmer (his mama is so proud) as he swam under the waterfalls and dove through the waves of the pool.

Thunder and threats of lightening drove us from the pool to Raccoon Lagoon - the truly "kiddie" area of the park.  All the rides are in miniature, and everything is catered toward little ones.  In this area, height restrictions are for those too TALL to ride! 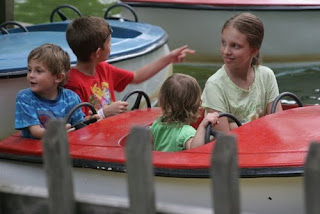 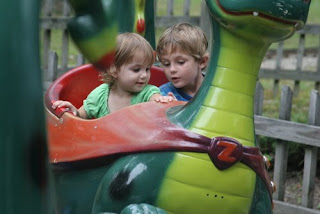 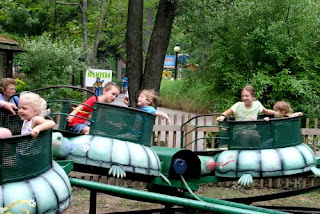 Raccoon Lagoon also features  Mister Roger's Neighborhood Trolley ride where kids can journey to the Land of Make-Believe and live shows with science demonstrations, singing and dancing for children of all ages.

Rain sent us out to Olde Idlewild - the part of the park that is, for the most part, original.  Michael and I both got Cyclone Cones - the BEST part of Idlewild, when it comes to food - a homemade waffle cone with vanilla ice cream, a layer of fresh strawberries, and a layer of whipped cream - SO TASTY!  We also shared a funnel cake, because we could.

In the rain, we did a final array of rides, and then headed home, exhausted.  The kids crashed and we had pizza and played Scruples before we grown-ups hit the hay as well.

It was a GREAT weekend with great people and I admit I'm not so happy to be home.
Posted by Missy at 1:20 PM

EVERYONE from PA has been posting pics on Facebook from Idlewild and I have been craving it sooo bad! Your right, something about having your own kids just makes you want to go! We are planning Hershey for this week, but its not the same :-) I must go up in August! I can't believe I forgot cylone cones until you said it..oh my yummy!~