(I promise to post pictures of yesterday's entry and today's sometime tonight, just not right now...)

Today I am more tired than I was yesterday, and I did very little physical activity, to be honest.

This morning we woke up early, packed lunches, left the kids with their grandparents, and headed out to go off roading (or 4-wheeling as it's called here (where I'm from 4-wheeling is what we do with quads, off-roading is what we do with Jeeps)) in the mountains with Michael's brother Doug and his wife, Lyndsey, who are hosting our Colorado visit.

Doug has a Jeep Cherokee that he's been working on with lift kids and other such items to make it off-road ready.  His vehicle certainly held it's own against the Wranglers that showed up to join our band of off-road peeps.  The Wrangler owners voiced their awe as Doug's vehicle made it over all of the most difficult obstacles presented on the trail.  There was less mud involved than I anticipated, and more stopping and getting out to watch each other conquer rocks and take pictures - but overall it was a fun morning.  At the top of the trail we hiked down to see a plane crash site from the 1960's, then we headed back down - I thought the down was more fun than the up... I am sure, however, that from the driver's perspective, the up is MUCH more fun than the down. 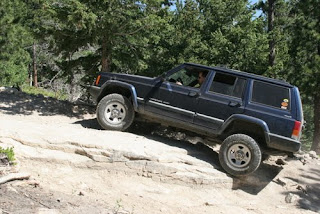 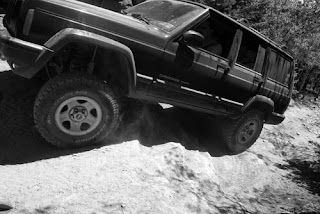 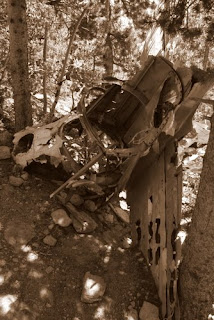 The four of us left the off-road experience and headed for Boulder.  I had been looking forward to this part of the trip because I figured it would be a place where I might find like-minded individuals.  Yes, this might include the pot smoking hippie folk - let's face it, I don't smoke pot, but I shower with Dr. Bronner's and don't wear deodorant, so I'm not so far off of that particular radar screen.

My favorite part of the Boulder excursion was a visit to a local arts and crafts gallery - a huge store filled with the work of local artists and artisans.  Really beautiful stuff.  Wished I had some disposable income to buy the dining room set that was wooden and hand painted with tons of interesting designs.

Our evening was spent babysitting the kiddos while Michael's parents and Doug and Lyndsey went out for their respective anniversaries, which both happen to be today.  It was a pretty easy night.  Maeryn actually went to sleep without a ride in the van and we got to catch up on our Curious George.
Posted by Missy at 8:28 PM