Last year we went three or four times and had a great time - this year, last night was the only one we could make.  I'm SO glad we did.

We were thinking of just going grocery shopping and then staying home for the night, but instead we went ahead to the concert.

If you haven't been, it's an outdoor concert on the townhouse green of St. Mary's College here in Southern Maryland.  Hundreds of people and dozens of vendors show up with their blankets, lawn chairs, and picnics to hear the free concert, which features a semi-local orchestra and a featured soloist each Friday night from the end of June - the end of July.

The concert begins at 7 PM and ends between 9:30 and 10 PM - we made it until the end once last year - we were staying for the fireworks promised for after the concert.

There were no fireworks last night, but we managed to make it all the way through the first half, intermission, and three movements into Mahler's symphony.  We dined on a mixed fruit thingie from Walmart and Original Sun Chips + a TON of water - we finished all that we brought (water wise).  And it was HOT.  Once the sun went down, there was some relief, but not a ton.  I still didn't want to sit with my legs touching.  Somehow kids don't have this issue - they both still wanted to snuggle and sit on my lap.  Uck.

The concert was great, as usual.  There was a violinist as the featured soloist, and I adore violin.  There was a Mahler symphony in the second act and I adore Mahler.  So - great music and a really good time - minus the bunch of guys + one girl sitting next to us drinking and talking loudly the entire evening - I recommend sitting in the "casual listening" section if you decide to attend with your family - I found the "serious socializing" area to be a little ruckus for my taste.  (We happened to be sitting next to a party of mostly single men who were drinking beer and not exactly keeping the cussing to a minimum - it wasn't heinous, so we didn't move, but I wouldn't sit there again.) (There is also a "serious listening" area for those who wish to sit near the orchestra and listening well...seriously.  We don't sit there because Maeryn would probably not sit for so long and seriously listen.) 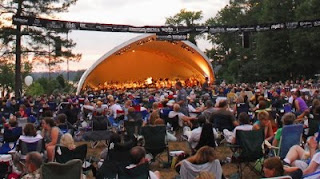