On Friday we decided to spend the day in DC, which is about an hour north of us.  We drove the 45 minutes to the Metro station and then hopped on and headed to the Smithsonian.

We spent the morning at the Air and Space Museum (albeit after a lengthy time trying to get out of the house and get everything packed) and ate a packed lunch in their food court.  Interesting to see everyone else with their McDonalds and us with our sandwiches and raisin boxes from home.

After lunch we saw a few more bits in the museum and then we walked across the Mall to the National Gallery of Art.

I'm pretty sure I had an easier time of it than Michael.  He was pushing Maeryn in the stroller, who insisted on yelling everything she said so that she could hear herself echo in the vast chambers of the museum.  She didn't want to stop and look at things, just to keep moving.  Jonah and I explored the Renaissance area and Jonah found several paintings of interest and wanted to know EVERYTHING about them.  We spent between two and ten minutes on each painting, just taking it all in.

After the National Gallery we moved on to American History and stayed until they closed.  We found a kids' area about inventors and inventions and both Jonah and Maeryn had a blast.  They built blocks and created new pathways and experimented with wind power.  I also got the experience of changing a poopy diaper on a marble slab in the very fancy restroom.

When we finished at the American History Museum, it was time for dinner.  We strolled through the Ronald Reagan plaza to the tunes of a fantastic band and waded through a sea of people swaying and dancing to the music to arrive at Ollie's Trolley - a locally owned diner.  We weren't sure they were veg friendly, so we checked out the surrounding chain restaurants, but all of them served tree nuts or peanuts or didn't serve actual dinner food, so we went back to Ollie's.  I am SO glad we did.

The restaurant itself is a little run down, but the food was amazing.  Best veggie burger I have ever experienced, great fries, and super thick milkshakes.  Jonah said it was the best hamburger of his life and Maeryn wolfed down everything we put in front of her.  It was a nice change of pace in the day and we all left feeling full and happy to jump back on the Metro and head for home.

When we arrived at the Metro station, however, we realized it was ten minutes until the rates changed (to a much cheaper fare), so we decided to take a stroll past the White House and show the kids where the president resides.  We got to see Marine 1 landing and snapped a photo of Jonah and me in front of the back entrance. 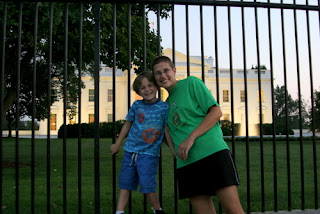 We arrived home well past bedtime after a REALLY great day in the city.
Posted by Missy at 5:51 AM