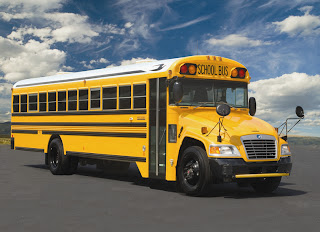 Some of you have been waiting oh so patiently to read about the goings-on when it comes to our bus adventure plans.

So here's the low-down:

Michael called the garage where our bus is based.  It went something like this:

Michael:  Hi, My name is Michael and I'm calling to check on the status of one of your school buses.  It was supposed to be available around this time and my family and I are planning to buy it.

Michael:  S told me months ago that this bus would be available at around $2500.

Michael:  Okay...  well could you just have S call me when he gets in?

No call from the receptionist, or S.  Michael calls again.

Michael:  Hi, this is Michael, I called earlier today about the buses.

R:  I don't know anything about any buses for sale right now.

Michael:  Is there anyone there I can talk to who might know something about this?

R:  I don't think we have any buses.  They're out with the drivers being cleaned.  None of them have prices.  We'll do that later this week.

Michael:  Okay.  Thank you for your time.

So after Michael got off work, we went to the garage.

Apparently, S was there, but much too busy to see anyone.  The receptionist was not exactly friendly, but the bus we were looking for was parked in the lot  and she told us we could go ahead and look at it.

There was a promise of a phone call last Thursday from S, and it never happened, so Michael is calling again today.

I'm hoping the man is just busy and the receptionist is just clueless, and we're not being taken for a ride...so to speak.
Posted by Missy at 5:51 AM

you can ask Becca to drive one back from Guatemala for you - they buy our school buses and turn them into tricked out commuter buses.