My mom has visited Preque Isle several times with her college roommate, Bonnie, who has a place here in Erie.  Bonnie makes turtles using sea glass and sells them in area shops.  Mom said that the one thing we absolutely had to do while we were here was to go to the beach and watch the sunset.

We saw that there was a ranger program about area insects (for free!) at Sunset Point, and figured that would be a great way to do something cool for the kids and to catch this famous sunset.  The program started at 8:30 PM, and it was around 7:40 when we decided to go, so there was some rushing involved.

Also...  we had no idea where Sunset Point was.

It was not listed on any of the maps.  GPS was clueless.  And so we were sort of just winging it as we drove around the Presque Isle loop.

Eventually, after much searching, we caught glimpses (did I mention it was raining?) of a campfire and some uniformed persons who looked like they might be braving the weather to talk about bugs.  There was a small circle including adults and children of all ages who were listening intently.  They were talking about ticks, which are evil, but sort of cool in their evil little way.  The rangers had some ticks in little glass containers for us to see.  They were dead, of course.  They also had some live bugs, including a couple of baby praying mantises for us to hold and study.  There was a table with microscopes for the kids to use along with several slides of area bugs.  Maeryn especially enjoyed the microscopes and magnifying glasses provided.

Eventually the rain stopped, and we were able to see that marvelous sunset.  It was a bit cloudy, but still lovely, and we have a date to see it again at the end of the week. 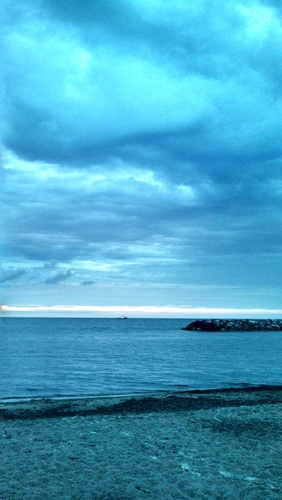