In Which We Realize We Have No Agenda 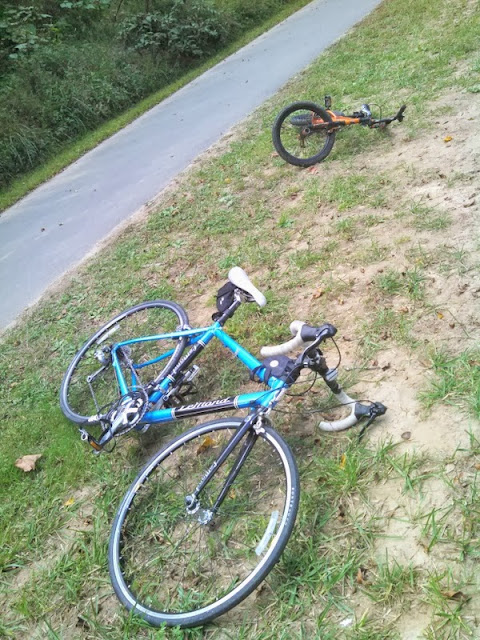 We seriously thought about staying at Springmaid Mountain for the next month to sit quietly and watch the leaves change and fall around us, only leaving at the signs of the first snow - but we decided to go.  There is always that push... to continue on... not to settle.  Not yet.  And so we debated about our next location.  Before we head south for the winter, I wanted to see the leaves change.  I wanted to visit a few other places - especially Kentucky, my mom's home state.  We went back and forth about what to do next... this was the first time in the journey we had no agenda.  No deadline.  Nothing to come back to.

After an hour or so of discussion, we landed on moving east to Asheville, NC.

Throughout our journey so far, many people have said we would love Asheville.  When we talk about "finding our spot" - Asheville comes up over and over again.  When I look up places to meet other unschoolers?  Asheville - and meeting other unschoolers had rested heavy on my heart since ARGH.  During the panel, all of the kids were well adjusted, happy, awesome people - but when we talked about connecting with others, many of the panel participants were brought to tears about how they longed for closer and deeper relationships with others like themselves.

I was pretty determined that Asheville would be a tourist attraction for us and nothing more.  I have no desire to live in the south.  I hate hot, humid summers.  I love snowy winters!

And then we got here.

We stayed in the cheapest campground around - right next to the highway.  It had horrible reviews on Google and no amenities (no bathhouse, no playground, no camp store).  A bike path ran directly through the grounds (which included about twenty spaces for RVs) and it was used heavily.

Immediately after we pulled in Maeryn noticed a few little girls playing at an RV at the end of the row.  She begged to be allowed to go over and play with them.  It's always a little scary to allow this for a multitude of reasons - not the least of which is the risk of rejection, which is always a blow to all of us.  I would rather just hole up in the bus.  We'll go and see the city, stay in the bus... there's no reason the kids should want to go out - no playground...

Michael took Maeryn over to meet the other little girls.

And it was good.  You'd think I'd learn my lesson by now when it comes to be social and open - but I really haven't.  The risk or rejection, ridicule, hatred, fear... it's so heavy on my mind.

Eventually, Jonah went and played with the little girls along with his sister and I really had no excuse anymore.  I went out and we talked with their grandmother and mother and they talked with us about the campground and the area.  They were nice.

After dinner Jonah wanted to check out the bike path.  I decided to accompany him. 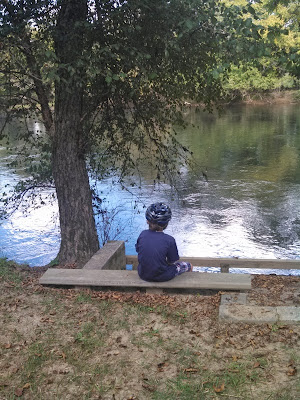 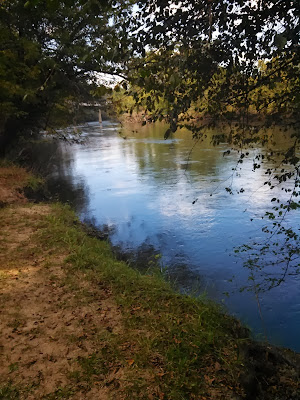 We had a great ride along the French Broad River, stopping a few times just to hang out along the way.

When we returned and put the bikes away, we set up the dining tarp my dad bought for us as an early Christmas gift.  It felt amazing to have another room for rest and play.

As we finished setting up the tarp and screen, our next door neighbors came over to introduce themselves.  They were full timers who decided to stay in Asheville and find permanent residence.  We chatted a long time before excusing ourselves to go on a drive through the city.

Downtown was busy, even on a weeknight, and the prominence and dominance of the arts struck me immediately.  There were studios and galleries on every corner, street musicians on every sidewalk, and living statues posing in front of every upscale restaurant.

When it came time for bed I thought, in a sort of foreboding way...  I might have to reconsider this place.
Posted by Missy at 6:00 AM

My sister Jenn went to Montreat for a while (up the road in Black Mountain). She was constantly escaping to hang out with artists in and around Asheville. There's definitely a STRONG sense of creative movement to the place.