Past and Present Collide 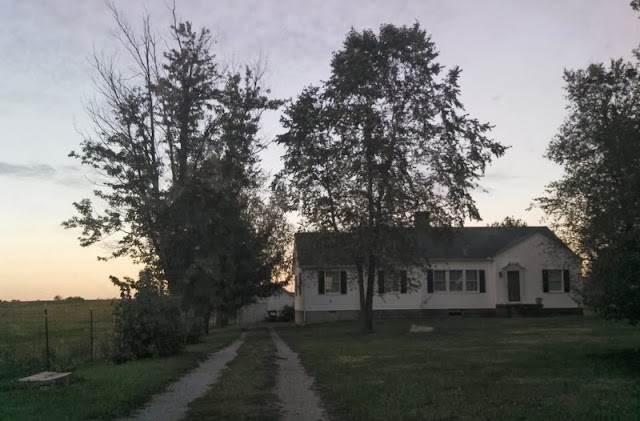 Boonesboro, KY is not so far away from Harrodsburg, KY where my mom grew up.  She lived on a farm outside of town with her mom, dad, and two sisters.

I've heard tons of stories about her childhood and teenage years.  Some happy, some funny, some just plain sad.  As a result, I've been doing research and started writing a book set at Mom's old farmhouse on Popaw's old farm.  Yet...  I'd never seen the farmhouse, only heard descriptions and seen small glimpses of parts of it in old pictures.  I wondered if, while we were in Kentucky, we might be able to find it, so we called Mom and asked for a description of the location, then went on a search.

We had a hard time getting out of the house, which is sort of the norm for us, so of course I was grouchy right off - we were trying to beat the light - I knew I couldn't begin to find the place in the dark - but eventually we hit the road and traffic let up and I calmed myself down enough to remember Mom's directions that she remembered from years gone by.

There was no old Ashland gas station at the corner, but we found the road in spite of this.  And instead of two or three houses on the road there were more like ten... and a huge neighborhood where another farm used to be.  We drove trying to figure out Mom's description and make it work with the reality of the future - it was a place she hadn't seen in eons, really.

When we found a house we thought might be the place we pulled into the driveway and Michael asked me what I wanted to do.

The truth was, I didn't know.  I didn't have any great plans.  I just sort of wanted to see the place.  And in some of my visions of seeing it, it was for sale, and we had the money, and we bought it, and I lived on the same farm where my mother grew up and there was this beautiful full circle-ness... thing.

While we sat there and I thought about what I really wanted to do, a man pulled up behind us in a pick up truck.  He was in his early sixties and was extremely friendly.  Asked us if we were looking for someone.  I told him who I was and who my grandfather was and wondered if this might have been his farm.  He said no, that he knew the history of his farm and that it used to be owned by a man named Woods.  At this point I tried to call Mom to see if Woods was a name she recognized, but no one was home.

I felt a little sad.

Maybe the house was no longer here.  Maybe it was their farm that had been sold to build the suburban development.

Michael convinced me to try one more trek down the road, and so we began at the beginning, trying to look only at the houses that might have been built before 1970 and that were set back from the road as described by both my parents.  A little white house.  An unpaved driveway...  a tree...

When we found it we weren't sure this could be the place.  I snapped a photo and send it to my mom via cellphone, but I knew she wouldn't get back to me until much later that night.

When she did she said it was the place.  She knew for sure when she saw the driveway - it was the same as it had been when they lived there, and she could remember playing in it with my Aunt Robin.  They would get banana boats from Dairy Queen, eat the sundaes, then wash out the plastic boats and sail them through the puddles when it rained.  Puddles in the driveway that was still there today.

And the farm was for sale.

It was listed at a price we could never begin to afford, and so things were extremely melancholy then.  I imagined the farm would be sold off to a developer, especially at this particular listing price, and it made me sad that all the land would be gone.  The house would remain, but no more farm, no more pond, no more cattle, no more acres of Kentucky bluegrass.

After visiting the farm we called my Aunt Robin and set up a meeting with her and my cousin and his wife for dinner the next evening.  When we talked I asked her if she remembered the banana boats.

Of course she did.

What a great picture of our farmhouse! I really liked this blog, Miss. Thanks for writing it! :) Love, Mom