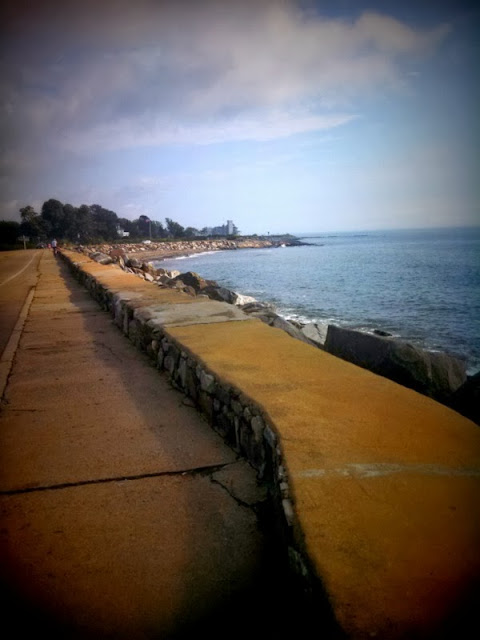 We've been in Rye, NH for the past several days.

We planned on staying with our friends here for three or four days.  It's day seven now.  I am trying not to feel like we're overstaying our welcome.  I'm trying to adjust to the fact that I had no idea what community really looked like until now.  I'm trying to deal with knowing that it's out there just waiting for us to find it, really find it, and that it can work and that people can help each other and do these things and that it's real.

I ran five miles this morning.  Timed long run.  It took me sixty minutes which is faster than I've ever done on a long run before.  I haven't been doing as much running as I should: story of my life.  It was easy to run and run and run along the coast of New Hampshire like this.  The sidewalk stumbles and thwarts itself along the chocolate brown of the rocky shore.  I dodged surfers and cyclists and other runners and old people walking holding hands.

I got lost in thoughts about friendship and values and my own paradigms about Christianity and lack of Christianity and what that means.  I wanted to hug everyone and hide by myself at once.

I've been reading a lot while we've been parked here.

The Bible.  I'm doing a study on Jesus based around the Book of Luke and written by Beth Moore.  I like her.  She teaches me stuff I didn't know before.

Women who run with the Wolves by Clarissa Pinkola Estes.  Talk about paradigm shifting.  It's like I've been walking a path toward this book my whole life and I'm finally jumping into it.  It feels like jumping, anyway.  Wind rushing past my ears.  Terrifying but oh so right.

I had a conversation over the phone a few days ago with a close friend who told me that she doesn't call herself a Christian anymore.  I needed to mull that over.  That she doesn't believe in afterlife as we were taught about it in Sunday School.  That she sees most religions as genuine seeking of The Divine and the Truth and Christianity is an equal path and my upbringing rails against that and my logical mind wraps around it and cradles it and forces me to think about it.  And I download the Wheel of the Year and compare it to all the Christian festivals and I wonder about God's Bigness.  And how His Design encompasses so many things.  The Life Death Life cycle that already exists in the world manifests in Christ and tells a story we already knew before we heard it for the first time...

If you're not following me, it's okay, I'm not even sure I'm following myself.

And then you have to re-assess what your sanity really is.
Posted by Missy at 6:00 AM