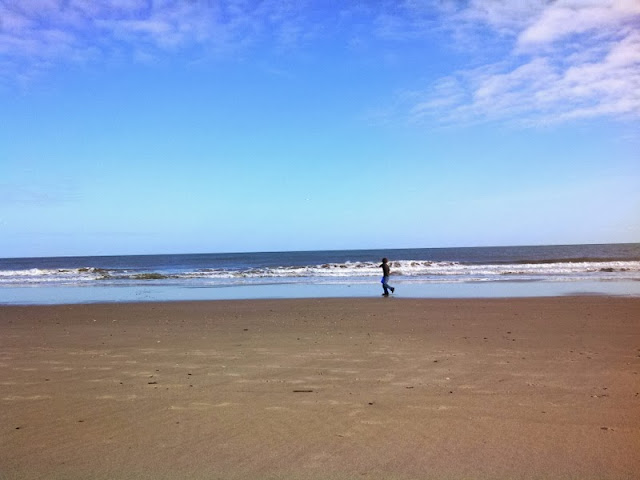 We had been in South Carolina for several days before I could convince Jonah that it would be a good idea to go to the beach.  I'm not sure why, but he was sort of putting it off.  He said he wanted to go, but not now.  Not now.  Not now...

We spent all of five minutes at the playground before both kids were bored and ready to leave.  I had the sand buckets in hand.

When we came within site of the ocean, it was like Jonah was going home. 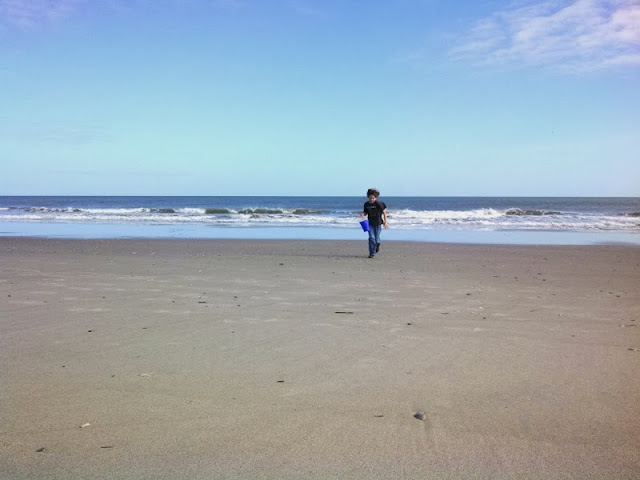 Maeryn had already been to the beach a couple of times, so she wasn't blown away.  By now, the sea held less magic and wonder.  For Jonah, it was enchanting.

We'd been reading the Percy Jackson books nightly for the last couple of weeks.  The whole family piled onto the bed listening, me reading.  For those of you not familiar with the books, Percy is a demigod (half human, half god).  His father is Poseidon.  Due to his parentage, Percy has control of water.  It also gives him strength.  I couldn't help thinking Jonah might be imagining himself as Percy - or maybe Percy's younger brother, as he played and splashed in the waves today.


After awhile, Jonah was not content to simply sit on the shore and stare at the waves.  He wanted to feel the water on his hands, legs, between his toes.  And so he grabbed Maeryn and together, they headed to the surf. 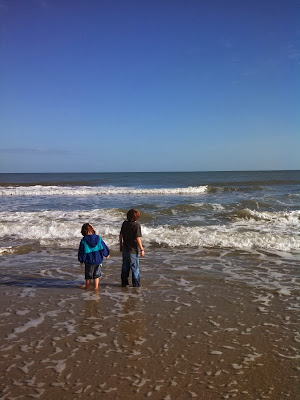 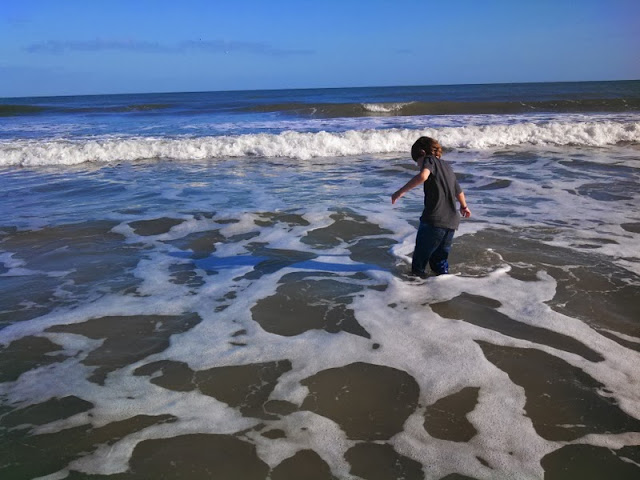 He wanted to go in farther - didn't care about wet jeans. 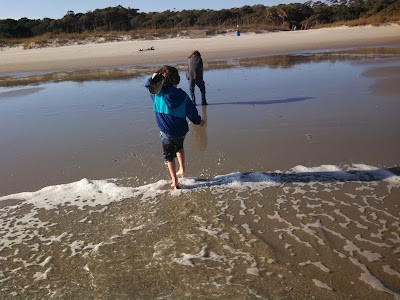 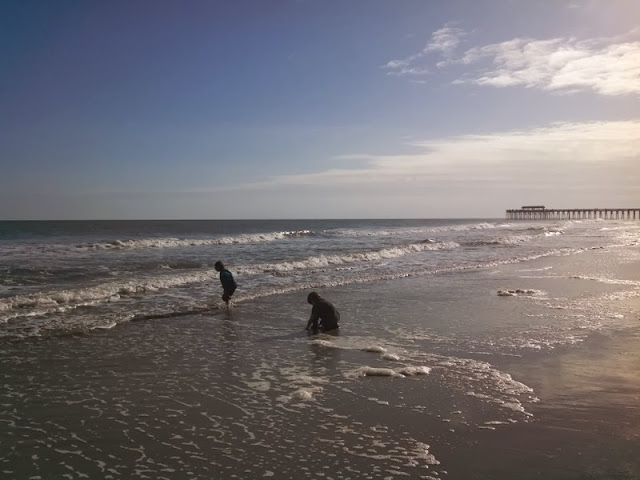 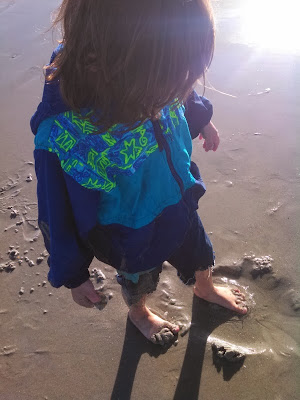 An hour or so into our excursion, we saw a pelican fishing over the water.  It was spectacular.  The bird kept circling and diving, circling and diving - just off shore.  I called Michael and told him he had to come - that he shouldn't miss this. 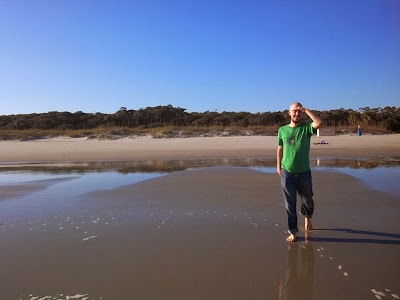 He left his work for a few minutes and ran down to see the pelican... and us. 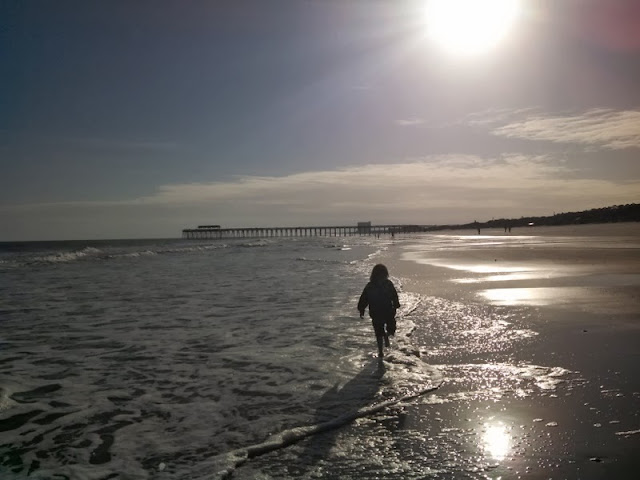 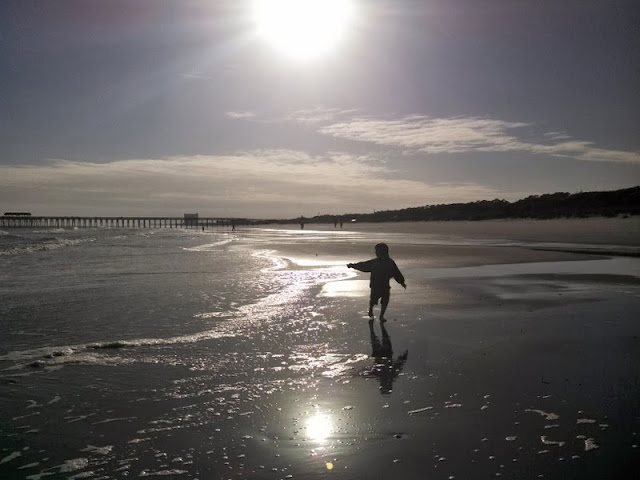 After Michael went back to the bus, Jonah spent a long while kneeling in the surf and staring out into the ocean.  He spent time conducting the waves with his hands and arms.  He closed his eyes and sat as the waves flowed around his waist.  It was beautiful to see him - arms dangling, fingers brushing the water...  total peace.

He sat like this for several minutes while Maeryn played in the sand near our blanket.  I just watched him and thought about how quickly he is growing into a man.  Only nine... already a little man.

When he finished with his meditation he dance around on the beach, ran in circles, splashed his sister, and then sat near me to dig and build. 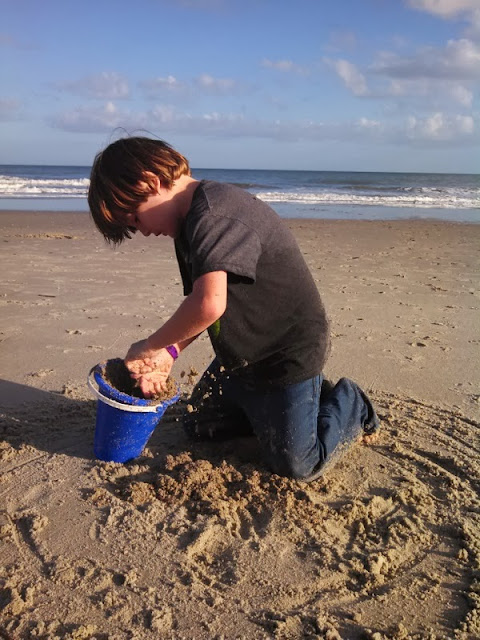 Michael re-joined us when work was finished and it grew darker and cold.  Everyone was hungry.  The kids and Michael stayed at the beach while I went home and made dinner.  They grabbed showers at the bathhouse and donned PJs before entering our cozy haven.  We feasted on vegan chili and biscuits.  And it was good.
Posted by Missy at 5:00 AM