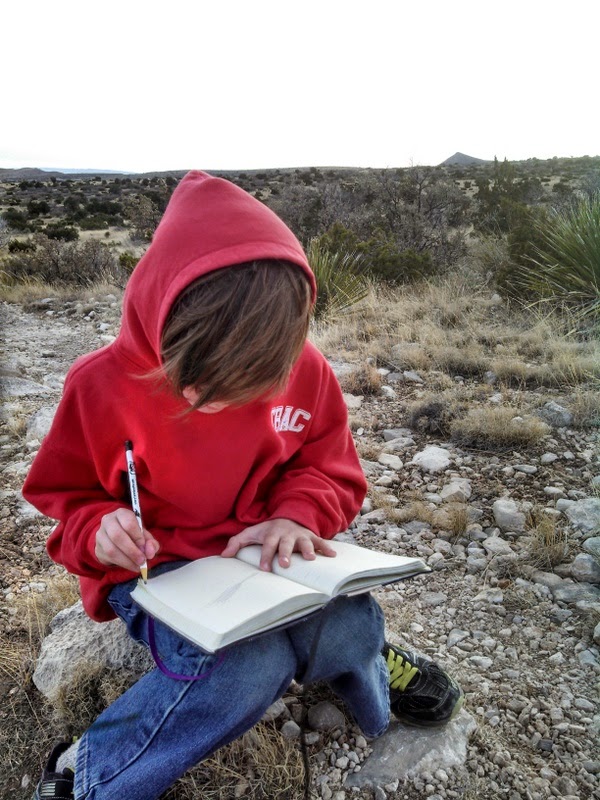 One of those things people worry about when they start down the unschooling path: How will he learn to read?  What is she never learns to spell?  What about proper grammar?

Reading, writing, and spelling have, of course, been ongoing journeys in our household for both of our children.

Jonah is nine years old.  He was working on writing today, so we'll focus on his journey for now.

Jonah began reading and writing at a very young age.  He expressed interest in both things around age two, and so we began offering opportunities for him at home.  We read aloud to him often from high interest material, and I admit I played the teacher a bit on our home blackboard and we talked about cat, mat, hat, and rat.  He was progressing really well until he went to preschool, which was really the beginning of our unschooling journey.

Since pulling him out of institutional education, we have had our share of worries about his progress.

At first he fell rapidly behind.

He was not reading at all.  He said he "couldn't read" and writing was absolutely out of the question.

As a former public school educator this was tough.

But we managed with a few setbacks.

We focused on what he wanted to do right now, and what he was interested in right now.

He had never lost his love for story, so we read many of them.

Never forced.  Always offered or asked for.  We read the entire Harry Potter Series, The Chronicles of Narnia, Percy Jackson and the Olympians, and many others.  For the most part, this was enough.  He didn't wish to read on his own and we didn't force it.

We did allow him to play video games that caught his attention.

We did read for pleasure while he was around.

We did comment on articles and about how much we were learning personally from reading on the internet or in magazines.

We did read those things aloud to him when he wished it or asked.

We did make grocery lists and ask for his input.

We did buy MAGIC: The Gathering cards when he asked and took him to the local comic book store to play with adults and teens and kids around his age.

We did get him a DS when we had the money and his own computer.

We did sometimes put closed captioning on movies we were watching.

And all of these things were observed, processed, and tucked away.

And then we noticed: he was reading.

This didn't happen over night.

There was a lot of in between.

Panic on my part: what if he never reads?  Should I be pushing this?

Oh but every time I pushed he went backward.

So reading happened slowly and on its own.

A few months ago he finished reading his first novel independently.

About a month ago he wrote a postcard to friends back home without asking for my help.

He wanted to write to them.  He saw the importance of communication: I write postcards to a list of eight people every time we change states.  Sometimes I add more friends or family members to this list.  He saw that.  He wanted to participate.  He wanted to do it privately and independently.  And so he did.

One of the toughest things about this process is the asking.

There is a lot of asking around this place.

Some days more than others.

He reads fluently now and his vocabulary is voluminous.  We still read a lot of books together.  Right now we're reading Inkheart (and by together, I mean I read and he listens to as many chapters as I can muster and when I run out of voice sometimes he makes me tea so he can hear more of the story).  He is reading The Adventures of Tin-Tin.  He knows many words.

Today he decided he wanted to write a spell book and create a wizarding school for his sister to attend.

He worked on the book for about an hour this morning.  He knew some of the words but most of them he asked me how to spell.  He wants to get it right.  He wants to spell it perfectly.  He doesn't want to guess.  And so he writes in pencil and he asks a lot of questions.  And in the end he has something useful that he can be proud of.

He and Maeryn have been outside most of the morning practicing the spells he created with their Magi-Quest wands from Great Wolf Lodge.  They made capes out of their fleece blankets.  They are using Jonah's book as reference material.

When Maeryn says "I don't know how to read," during their lessons, Jonah patiently points to a word he wrote with his own hand and tells her what it says.  They help each other.  They grow together.