We did not leave when we had intended.

The day seemed to drag on and on.

I rode my bike to my studio to teach a preschool art class that never was.  I worked on two different paintings.  I mulled over a colored pencil creation including a tulip and a portrait of the mountains.  I waited.

When my family arrived I was ready to go camping.  I had been looking forward to this for months.  But we weren't ready.

Michael had to get the oil changed in the car, kids had to be helped with a myriad of packing adventures.  My clothes weren't on the bed ready for the open suitcase, I still had to put them out.  No one had eaten lunch.

All seemed chaotic and filled with frustration.

I tried to maintain a positive attitude even though my heart was brimming over with disappointment and resentment:  why couldn't we ever be ready for anything on time?

We didn't get on the road until three hours after we'd planned to leave.  I didn't pout or complain, but I'm sure that my negative energy was contagious, as the kids fought with one another in the backseat for much of the drive and conversations between Michael and me seemed tense and fraught with egg-shell walking and uncertainty: distrust.

Our arrival at the campsite did not occur until ten o'clock PM.  We were exhausted - the kids showed it by zonking out in the back seat.  We missed the turn twice before finally stumbling upon the actual entrance to Yellow Creek State Park in the Laurel Highlands of Pennsylvania.

The night was dark.  A car was parked in our space in front of our cabin.

I, of course, panicked, thinking that something had gone wrong with our reservation and now we were doomed to slumber in the cramped, overloaded car, but Michael kept a clear head as we realized the neighbors had an illegally parked extra vehicle and our cabin was, thankfully, empty.

Frustration was replaced by excitement for the first time as we encountered our home for the weekend. 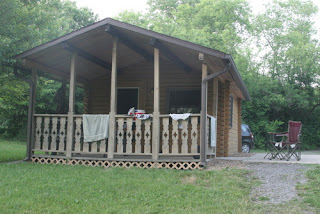 The cabin was beautiful.  Two bunk beds, one including a double on the bottom for Michael and me, a loveseat, a padded chair, a countertop and hard backed chairs for eating or writing tucked beneath the counter...  our keys, maps, booklets, and a composition notebook from past guests discussing their experiences in our shared sleeping quarters.

At that time, we could not see the beautiful surroundings encasing our little cottage - only shadows and the crisp sloosh slosh of water on an invisible shore.

We carried the kids to their respective beds and hit the bathhouse.

I expected Daddy Long-legs and beetles and cobwebs and mildew and dirt.  The pleasant surprise was that the bathhouse was clean and sparkling: a brand new bathhouse for semi-new cabins and yurts.  Three showers, a few sinks, several toilet stalls, paper towels and hand-dryers.  Everything automatic and electronic: not exactly roughing it.

We hit the hay after brushing our teeth.

My night was rough.  It's always hard to sleep away from home, but this time I had that camping, sweaty-cold feeling.  I took a few trips to the bathhouse.  I shivered under sheets since we forgot our heavier blankets and sleeping bags.  We'd have to remedy this at the local Walmart before sleeping again.

I love to eat breakfast outside.  I could eat for hours outside and everything would taste fantastic.  The fresh air makes me hungry.  We dined on bagels and blueberries, strawberries and cheese - all picked up by Michael that morning.  Before breakfast I took a shower.  It wasn't all it was cracked up to be: I chose the shower with the broken head... but it was mostly warm and it was a welcome relaxation after a hard night on a sticky mattress.

The morning lasted longer than I'd hoped, but eventually we made it to the other side of the lake, rented a canoe, and paddled to our campsite for lunch.

I was tired from my ten mile bike excursion the day before, and it was honestly all I could do to have a positive attitude.  It took work.  I wasn't used to that.  I suppose in years past I would have spent the weekend yelling at everyone and pounding around the cabin, but I tried hard to get past how crappy my body was feeling and concentrate on the moment.  It worked most of the time.

In the afternoon we stopped at a local ice creamery and snatched some cheese fries and chatted about my growing up in Appalachia, and how I was unaware of it while I was living there - the mountains were the mountains were the topography of everything and for everyone - I never noticed them until they were no longer there.  Jonah and Maeryn each had rootbeer and sampled some fries.  Michael chuckled at how very many ketchup packets seem necessary for those of us who grew up indoctrinated to support the Heinz company.  I turned up my nose and explained that lots of ketchup is always essential.

We ventured toward the beach and found a playground crawling with kids on the way - we never made it to the beach.

Maeryn tried her hand at the high monkey bars and experimented with jumping from the swinging bridge while Jonah spun round and round on the precarious tire swing with new friends who were somewhat more daring than he.

And when they left with friends and family it was time for our family's dinner time, and we drove back to the cabin to roast hotdogs and make pizza mountain pies and play in the water.

The lake was serene.  The boats were lit.  The sun was setting. 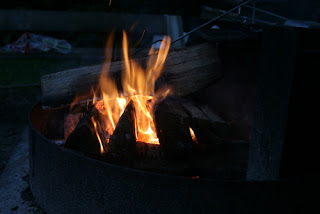 The fire crackled warm and welcoming and my negative thoughts and my aching body seemed to float away on the silvery twilight air.  The smell of woodsmoke calms me - takes me back to my childhood - days without care. 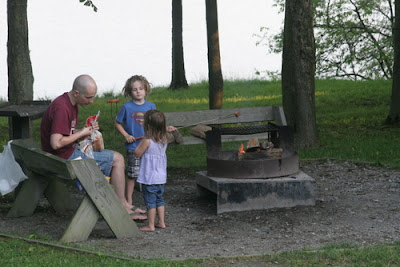 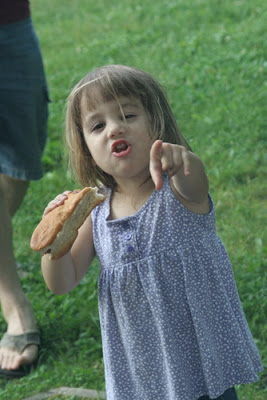 For s'mores we roasted huge marshmallows and used "the good chocolate" and licked our sticky fingers and watched our faces smeared with sugary whiteness and black ashes smiling and pondering in the quiet evening. 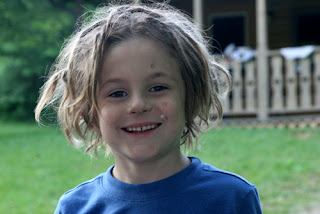 Jonah made a friend in the next cabin and visited after s'mores.  I was afraid.  My anxiety took hold of me and I did not want to meet her parents... but we went and we talked and we laughed and I was glad we did it.

On Sunday we got up too late and packed too slowly and none of us wanted to leave.  Maeryn sang a song to herself about Saturday being a good day and we knew that camping, in spite of everything, had been a success.

The trip home was thankfully broken by a visit with old friends, burgers on the grill, small talk and laughing, our children running outside, dancing with Wii games, and painting pictures together.

Home was back to the mad rush of our family's summer - no time to stop and hear the crickets or catch the lightning bugs - but lingering in heart's full of memories and hopes for next year's excursions and relationships knit a little closer, a little tighter, a little sweeter inside. 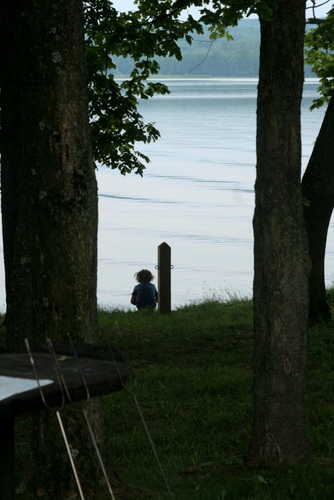