I finally convinced the fam that we should absolutely at very least visit the section of Robert H. Treman State Park that we did not see on our previous evening excursion, and it was worth every second.

It was moving day, so Billy came with us.

There was a parking fee, and the nice lady allowed us to pay as a car, since the bus fee was outlandish and there are only four of us.

This section of the park was completely different from the swimming area.  There were fields and playgrounds and trails and a neat old mill with self-guided tours.

We took advantage of the tour, and the restroom facilities.

Our goal was the falls, which are supposedly ~100 feet tall, and so after our restroom and mill tour, we found the appropriate trail, and started hiking.

They said there would be stairs.

And stairs there were!

Instead of a rustic hiking trail through woods with cedar lining the path, there were stone carved benches, stairways, and walls like something out of a Mayan ruin archeological dig.  I was fascinated at every turn by the natural cuts in the sides of the mountains (gorges!), the sound of the lapping water, the frequent cascades...  and I wasn't alone - many people joined us on our hike that day.


We soon came to our first falls treat.  Several people (us included) waded into the small waterfall... we found out later this was against the rules. 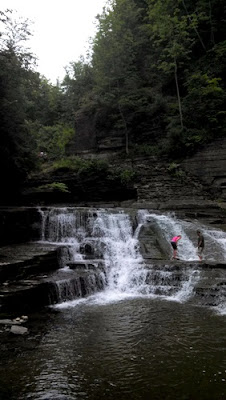 Michael had the opportunity to talk to one of the rangers who gave us history surrounding the falls, explained that the family after whom the park is named purchased the land in order to preserve it, then sold it back to the state of New York to make into a park.  There are strict rules about where you may and may not wade or swim in order to preserve these natural wonders. 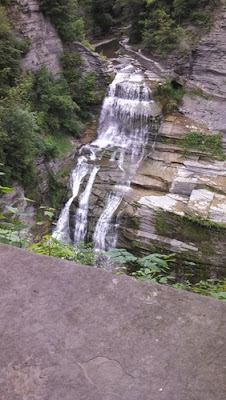 After hiking to the bottom of the falls, you must of course hike back up.  This would have been less fun, if Michael hadn't challenged himself to run the entire way.  He asked me to time him.  The kids and I took bets about how long it would take him to do the entire giant stairway.  The kids guessed over ten minutes.  I guess five minutes.  He made it back in three: impressive.

The hike out was a little more traditional.  We took an alternate trail so we could go over some neat looking bridges and maybe get back to the bus faster.

And so we moved on from Ithaca, NY.

and I admit some sadness.

So far, this has been my favorite spot.

I am loving this experience. I love NY. Upstate. There you have it. :)