I couldn't imagine traveling away from Bangor without heading to Acadia again - and so, waving goodbye to our friends, we set a course for Acadia National Park: Day 2.

This time, our goal was to hike up Cadillac - the highest peak in the park, and on the east coast.

We figured it would be an easy hike, so we added some extra mileage via Mt. Dorr - a neighboring mountain.  We would hike up Dorr, down Dorr, and up Cadillac - hang out at the summit, grab some food and drinks from the Visitor's Center there, then hike back down by dinner time.

At the beginning of the trail, the sign read "Difficult" - and so it began - but it was nothing we couldn't handle, or hadn't seen before.

A boy was running down the first set of stone steps with his dad, and they said something about the possibility of caves.  This lit a new excitement under everyone, and we sped our ascent. 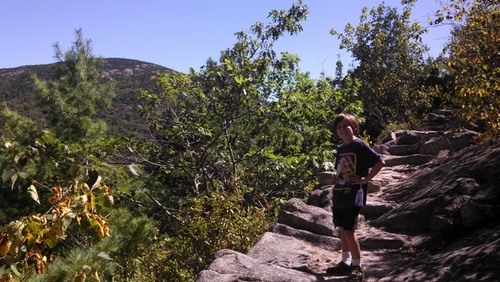 There were stone steps going on forever.  Then boulders.  Then stone steps.  It was an absolute workout.

And there were a few caves, but they were about a quarter of the way up - definitely not at the top.

Matthew - the boy who we saw bouncing down the steps earlier with his dad - decided to hike back up with Jonah.  Both boys ran ahead.

I stayed in the middle.

Michael and Maeryn hung back, went slow, and observed everything. 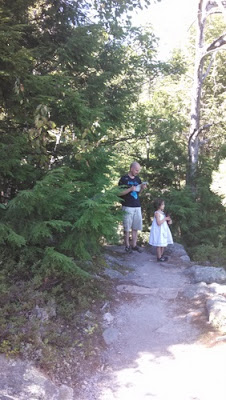 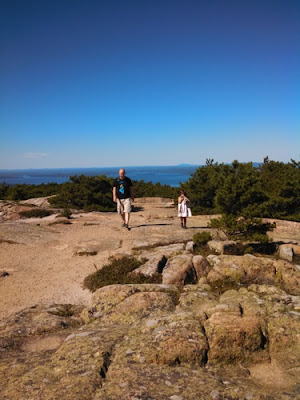 By the time we made it to the summit we were pretty spent, but we'd committed, and the map and signs said it was only another .6 miles to the summit of Cadillac.  It would be a shame to turn back now.

So we followed the blue blazes a little further.

I volunteered to hang back with Maeryn this time, and Michael hopped ahead with Matthew, Jonah, and Jeremy (Matthew's dad).

We began the descent from Mount Dorr.

We were literally climbing down the face of Mount Dorr.  I helped Maeryn find the footholds.  Helped her get down the tough parts.

Michael and the boys were far ahead - he called to me from the face of Cadillac:  "Are you okay?  It's pretty intense!"  I was okay.  The echo between the mountains was impressive.

It was now that we entered the wooded area between the mountains and the Gorge Path (we picked it up halfway through, at the point before the ascent of Cadillac).

It seemed pretty tame as we took our little jaunt through the shaded woods that led from the gorge to the face of Cadillac - and then I saw what Michael meant when he said "intense".

I took a deep breath and we started up.  So far, so good.

And then Maeryn got tired.

She didn't want to listen anymore.  She wanted to take a rest - but there was no where to rest.  We were on the rocky mountain face.  To our left - thick woods.  To our right...  a fall into oblivion.  We were three feet from the ledge to the drop - hundreds of feet to the bottom of the mountain.  We couldn't turn back - it would be harder to descend than to keep going.

After pushing forward a few more feet I found a crevice where I could barely sit with my feet keeping me stable.  I pulled Maeryn close to me and said, "Okay, we can take a little rest."  She snuggled in while I took a look around.

The next section of hiking looked to be ledge hiking with about two feet of space between hiker and fall to doom.  I had no idea how Maeryn and I would make it in our current state.  I've got a healthy fear of heights.  And Maeryn is a daredevil without a sense of danger or peril - especially when tired.

After we sat for a few minutes, Maeryn tried to run ahead.  This was not a safe place for running.  I bear-hugged her to my chest - "No, Maeryn, we need to sit here a few more minutes and get centered.  We both need to calm down."  She whined that she wanted to go.  I saw the ledge above and felt sick to my stomach.  I reached for the phone in my backpack and called Michael.  He was already at the summit with the boys.

Hearing his voice I could feel tears welling up and spilling over my eyelids, "I need you to come and get us.  I need help."

He said he would come.  It would take ten minutes.  We were that close.  That high off the ground.  At least 1,000 feet.  And so close to the ledge.

I held Maeryn tightly.  She sucked her thumb.  I told her we needed to wait for Daddy.

When he got there I cried again - this time with relief.  He stayed with Maeryn and I went on ahead.  He got her into a better head-space - something I couldn't do because I had my own fears to conquer.  It was taking all of my energy not to panic hiking so close to the edge.  So close to certain death.  I forced myself to focus on the blue blazes.  The solid granite.  To keep my mind off of the slippery parts, the horrible possibility of falling.

Michael and Maeryn made a great team.  Both are fearless when it comes to high things.  Michael was able to make the hike fun again - and the two of them clambered onward without care.

I fought my own demons.  Bursting into tears once more before finishing the ascent, I did make it to the summit.  I had crawled on all fours most of the way - climbing, scampering, clinging to the granite walls.  But I made it. 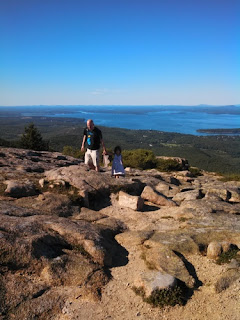 Maeryn and Michael came up behind me and we walked together to the summit.  To Jonah and his new friend, whose dad had bought him popcorn and Gatorade.  We exchanged phone numbers and thank yous.  We drank water and had snacks.

Matthew and his dad (Jeremy) hiked back down the mountain another way.

Michael (my crazy amazing hubby) ran back down the way we came (it was fastest) and got the car so we could all make it back down safely.

The kids and I spent an hour atop Cadillac, breathing the brisk air, taking in the people, the place, the food, the restrooms.  In spite of my scare, Acadia is my favorite of places.  I don't know that I would hike the face of Cadillac again, but I would do another of the numerous trails.  I would sleep under the stars.  I would wade in the ocean.  I would remember what it was like to feel so alive.