Michael Bell, my renowned hubby, is my guest for the evening here at the Mobile.  He and Jonah recently hiked for three days on the Appalachian Trail.  I hear it was quite the adventure.  I figured it was best to get a first person accounting of the tale.  Enjoy!

It's pretty amazing what just a few days on (or on the way to) the Appalachian Trail can bring.  I'm sure this is going to be a little disjointed, but I promise to try to cover (and remember!) everything.

Friday dawned early.  like 4am.  Ok, the sun was down, but I was up and trying to get ready to go.  A shower and shave (my last of both for a few days) helped to rouse me.  I worked to get everything and everyone ready for the trip, especially since we needed the whole family up to get Jonah and me to the bus stop, which is about 3 miles from our house.  We missed the 6am bus by about 5 minutes, but I was smart (and I know I am often late) and so we were still able to catch the last bus of the day at 6:30am.  Jonah was quite excited about the bus ride and spent much of the ride looking out the very large windows.  Luckily the bus wasn't full and there was room for our packs in the seats behind us.  We got the the state department building in DC (the last stop), and meandered our way to the Air and Space Museum (Jonah's pick during planning). 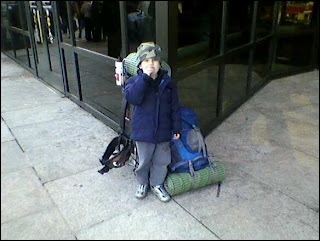 We waited about 10 minutes for it to open and then were turned away because I had a multi-tool in my pack  No dice on having them hold it, either.  This was Jonah's wish and our lunch spot, so I did the only thing I could think of - I buried it in the planter out front and went back through security.  We saw a few things (it was pretty interesting walking through a space station with a 35lb pack on!), ate lunch, and headed for the metro and then to the bus which would be the last mechanized leg of our outbound trip.


Our first day on the trail was mostly on the roads around Myersville, MD.  The roads moved from paved with lines to paved with no lines to meandering county roads to a MASSIVE climb on a dirt road.  We finally crested the hill with a pack-less Jonah (I had already 'adjusted' his pack weight by taking his sleeping bag onto my pack) 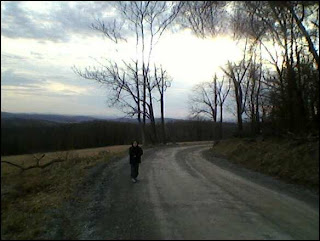 As you can see from the picture, it's already getting late in the day and we still had about 2.5 miles to go.  We finally made it to camp, but only well after dark.  Luckily we'd packed a flashlight this time (lessons learned from Missy and my hiking trip last year).

We stayed the night, and after a call to Mom, we sacked in.  0 degree bag not so much with a bit of a wind; I was pretty cold all night and woke many, many times.  We survived (Jonah slept just fine), packed up, explored the two-shelter site (pretty rare on the trail), and headed out for what was to be our longest day on the trail - 9.1 miles into an overcast morning.

Being that is was a Saturday, the trail was buzzing with many day hikers and even a few overnighters coming the other way.   No thru-hikers at this time of year, especially halfway down the trail.  It was fun to see so many different people and we even ran into some great people who we ended up spending the night with, but more on that later. 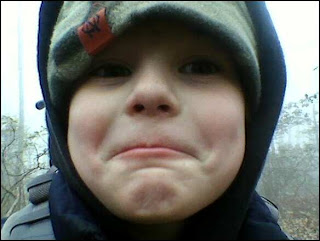 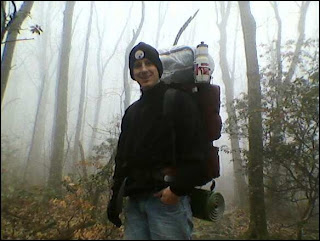 Jonah learned about fog firsthand for most of the morning, but by afternoon the fog was thinning and so were our spirits - Jonah was pretty tuckered out and we were only halfway through the day.  It was nearly 1:00 before we made it to our halfway point - lunch, and the shelter was a quarter mile off the trail.  That quarter mile may as well have been 10 for my little guy, so I scooped him up and carried him down the rather steep trail to a well kept but old shelter for lunch.  We called Mom, left a somewhat despairing message, ate our lunch of tuna and various other sundries, packed up, and prepared for the hike out.  I wanted Jonah to be able to say he hiked 9 miles all by himself, but I didn't think a little help on the side trails would take that away from him, so I scooped him up again and trudged up the hill.  It was quite possibly the hardest thing I've done physically since mile 18-26 of the Flying Pig Marathon last year.  By the time we got to the top, I think Jonah understood how hard he needed to work to get this thing done, because he set off with renewed vigor and not a hint of the pitying of himself that had plagued the first half of our day (the food probably didn't hurt either).
We made it to our destination (Ed Garvey Shelter) with 30 minutes of daylight to spare!  We had been warned of a lost dog by passing hikers, and we were not disappointed - there he was, a mid-sized puppy-energy filled dog complete with tags and a harness, but no owners.  Some hikers who had passed us earlier in the day (and who had warned us of coming thunderstorms), were camped in already, fire going, bags out, the whole works.  They'd been there for over five hours already.  We were joined by a brit from DC, and our humble little band was complete.  The night passed around the fire uneventfully for us (I'm pretty sure Jonah talked at least one ear off), though the dog had a pretty exciting night.  I slept at least twice as well, half due to wearing twice as many clothes and aided by a much more wind-protective shelter.  The Brit on the lower level got slobber attacked by our furry friend around 5:30am and decided to shove off early.  The dog followed him.

Sunday dawned with a steady downpour, which complicated matters a bit, especially since we'd been averaging about 1 mile per hour and this day we had 3.5 hours to cover the six miles between us and the only train of the day from Harper's Ferry to Union Station on our way home.  Desperate times and necessity formed a little rope sling for Jonah to stand in so I could carry him with much less effort on the part of my arms.  The 100ish pounds on my legs still got tiring on the slow descent, but it saved a lot of time as we alternated between both walking and me carrying the little trooper.  Then about halfway to our destination we met back up with an old friend: the dog, now wet, cold, and alone.  He followed us down the steep switchbacks to the C&O canal towpath section of the trail - the final leg of our journey.  I cut a length of rope for a leash to keep him safe (and to follow the C&O rules as I found out later!).   Sometimes carrying Jonah and sometimes dragging him down the trail, both of us always being dragged by the dog (Jonah alone at one point!), we pushed ahead what seemed like an eternity through rain and cold to the base of the stairs that crossed the river into Harper's Ferry, the psychological midpoint of the AT, with about 30 minutes to spare, but with a dog in tow that would never be allowed on the train, even if we wanted to bring him home (well, one of us did want to bring him home, and it wasn't me).  Fate smiled on us as we took the first few steps up the rail trestle bridge when we met a vet on a Sunday walk who offered to take the dog in for the night until the owners could be contacted (via the dog's rabies tag #).

The train was, of course, about an hour late, but that gave us time to consume the last of our food, strip probably 25 pounds of cold wet clothing, and warm slightly in the historic Harper's Ferry train station - it was lovely.  A few others meandered in and out of the station during our stay, the most notable of which was a college student who was about 50 miles into a self-supported trip up the C&O canal (all the way to Pittsburgh) on a unicycle.  I never did get to see the actual accomplishment of this daring feat, but my imagination ran wild enough for me to be fully amused. 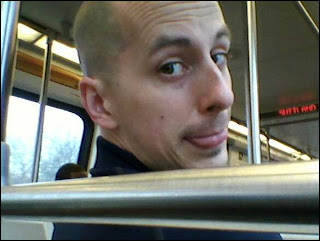 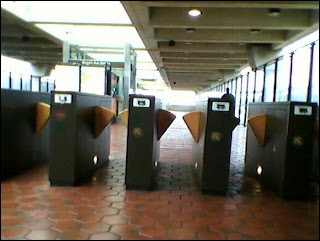 The Amtrak train was huge and spacious, a lovely respit after a few days on the trail.  We made our connecting metro and after a little bit of waiting, jumped into the car driven by Mommy, which I proceeded to turn into a sauna.

All in all, there's a couple things I learned in this endeavor:
1. Bring better rain gear.
2. You need to call Amtrak ahead of time in order to board a train.  (many thanks to my shelter-mates of Saturday night for this tip before it bit me).
3. 0.4 miles from camp for water steeply downhill is great on the way down.
4. Home and loved ones are welcome sights after time away.
5. The AT is nothing to be trifled with.
6  I can't wait to go back.

Thanks for reading my rant - things seem so much more succinct in your head.