My Kids, the Outlaws. 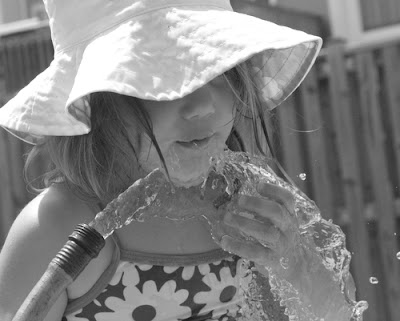 Recently, in our neighborhood, we've had the most fantastic experiences for all of the parents and children on every street (can you taste the sarcasm dripping from my text tonight?): we had a visit from the local sheriff's department.

One of the neighbors called to report that there was "unsupervised children" running rampant in the neighborhood.  There was the implication that these children are never supervised, and a reference to winter, when several of the kids were sled riding across the street from our house "without parental supervision".  When the officer showed up, two girls were playing in the wooded area across the street, my son was out roller blading, and my daughter was on the front stoop of our house.  Two boys were chasing one another with Nerf guns at the end of the block, and a group of kids of all ages were hanging out on the upper street of the neighborhood trading rides on skateboards and an electric scooter.

The officer said he'd had a call of complaint from one of our neighbors that there were kids unsupervised and out in the neighborhood right this second, so he came to check it out.  He brought the two girls who were playing in the wooded area back to one of their mom's houses and explained to the mom that kids under ten aren't allowed to be outside unsupervised.  He claimed this was the law in our state.  He also managed to scare the kids into tears.  Though he was very polite, he still had an adverse effect on the parents and kids in our neighborhood.  And I'm angry.  Because my child shouldn't be punished by having to stay inside.  My kid shouldn't have to worry about someone calling the police because he wants to rollerblade down the street.  My kid shouldn't have to look over his shoulder to see if his soccer ball kicking and sprinkler running and biking to his friends' house is bothering anyone.  And I shouldn't have to hold his hand while he does every. single. thing.

In researching, I found out that there isn't any such law about ten year olds and unsupervised play.  Not a huge surprise, Michael has been stopped by the police for following our state's bike laws because the officer just decided he was wrong.  When Michael protested, he was told he was wrong and really there was nothing he could do about it.  The officer just made up a law to suit his purposes and support the neighbor who made the report.

Since I've been following the Free Range Kids blog for awhile now, I figured it was worth commenting on her page to see if I could get any feedback as far as how to handle the situation.  She wrote me almost immediately and asked if she could feature my comment in a blog post for her readers.  Of course I accepted.  You can read it here.

I don't know who it was who called to report our kids.  I don't know if they have some other beef with kids in general or with our kids that we don't know about or if they're just grouchy and don't like kids.  Maybe they actually think we just dump our kids off in the neighborhood and then share wine and bon bons and go out shopping for eight hours at a time and forget our kids exist: leave them completely alone and without support to go and fend for themselves.  Regardless, I'm not letting those neighbors ruin my children's summer.

It's scary, because next time, it might be my house the officer comes to, rather than someone else's, but it's worth it to challenge something so ridiculous, especially when my riskiest parenting offense is letting my daughter drink water straight from the hose.

I just found your blog via Lenore's, and I'm glad I did because there is much here that interests me. :)

But I'm commenting to chime in with my support. A lot of people seem to think there are laws on the books about specific ages for things—and that's fine if we're talking about the general public who can be educated—but for a police officer to be so misinformed (or making it up) is ridiculous!

Maybe a middle road is to call the PD and explain the situation and ask for clarification of the law involved, since you did research and couldn't find any such law.

Not that you asked for advice - I'm just thinking out loud. I'll be following your story to see how it goes; good luck to you all... xo

Gives a whole new meaning to the term "Nanny State".

I almost drank from our hose once, but there was a label on it that said "not for drinking water" and it freaked me out.

This totally pisses me off!!! Come over to my 'neighborhood' and I'll make scones and juice and the kids can run around and scream all day outside.

Meghann - thanks so much for reading! It's great to have you over here! And your advice is welcome and kind! Thank you! I'm not sure what our next step will be, to be honest. I think we'll probably take care of covering our legal behinds with the local homeschooling legal advocacy group and then see what happens "next time". I hate that there is now pervasive fear among the parents in our neighborhood. It's frustrating and scary at the same time.

Magical Mom - I would love to come over anytime!!!

Not trying to be one of those neighbors that call the cops on neighborhood kids (that's just not me), I called Social Services and inquired. I too, had heard of the under 10 "law" and had several times seen a 3 year old wandering the neighborhood by himself. SS told me the same thing. Any child under the age of 10 must have someone supervise them, even if the 'supervisor' is at least 13+. I personally don’t have any complaints about children playing on their street, even if they are under 10 (3 is a little too young though).

Rock on mom! If there were any kids in my neighborhood to play with, you're dang sure that my kid would be out there with them when she's old enough. As it stands, I let her play alone in our yard, with my peeking out every 5 minutes or so... but, she's only just turned 3. I HATE how this fear is taking over this country. Not fear of predators but fear of the police or CPS saying that you can't parent like that and we'll take your kids from you if you don't do what we say. I, too, love Lenore's blog...and talk about it a lot. A friend of mine has a boy the same age as my girl. His dad used to work as a prosecutor for the DA in a city and he says that I'm wrong... I tell him that it's his car that is the real danger. He drove home anyways.

Looking forward to hearing updates on the drama - though I hope that there isn't anymore and that you have a lovely police free summer.

Nellie - thanks for your research. My daughter is three and does not play outside of our yard alone, ever - three is way too young! My friend who works for Child Welfare told me that there is no such law. I'll have to call up the precinct and ask them to tell me where I can find a copy of the law on the books.

Nellie - just saw you follow P. John's blog - so I think I know who you are! We share the friend in social services - if I'm guessing right.

PS - What I did note about state law is that kids need to have a support structure in place if they are playing outside in their neighborhood - they should know their phone number and the neighbors and you should be close by. I'm close by, my son knows our phone number and address, and lots of our neighbors know my son well.

WHAT?! The joke of the neighborhood when I was little was that every time my mom would call out to me to check on me my voice would respond from further and further away each time. My childhood was AWESOME because I had free range of the outdoors and unlimited use of my imagination. I admire you for understanding kids can be left to play on their own in the big old world of a neighborhood.

I would suggest calling the sheriff's office and chatting with the deputy's supervisor. Maybe even making a formal complaint. It's unethical for law enforcement to make up laws and upset people unduly. If his supervisor isn't made aware of it, I'm sure little will change.

Toasts my buns that a neighbor called it in.

I think the key word here is "supervised" - I consider my kids' play to be supervised if I am within running distance/earshot of real trouble. Or, if there is an 11-year-old or older with them (say, if they go to the sledding hill which is out of sight of the house, across the golf course).

I'm guessing that the better you know your neighbors, the more likely you are to prevent interference of this nature - they are more likely to come to you with their concerns and you can reassure you that the kids are supervised, even if you aren't in sight.

I cannot imagine this law being actually enforced - I would never get any housework done and my children would never have any real fun or exercise. What a nightmare! No wonder mothers feel more burdened than the preceding generations - our mothers got their work done while we played.

On a less serious note... I'm betting it was the insane "this unreserved parking spot belongs to me" lady who called it in.

lol - no idea who it was, but wouldn't be surprised there :)