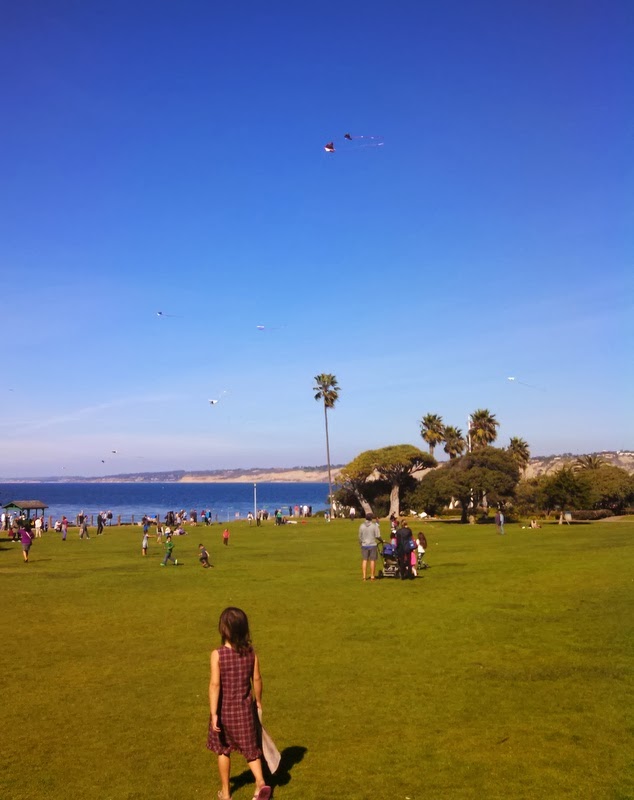 La Jolla is the place you see on TV when you see seals and seal lions up and close and personal on the shores of the Pacific in California, so I want to be sure to go there and have that experience.  While I was checking things out online, I found La Jolla Kayak, and added ocean kayaking by the La Jolla sea caves to my bucket list.

Maeryn and Michael didn't have any desire to go ocean kayaking, but Jonah said he'd like to come with me, so we partnered up for adventuring once more.

Before checking in with the kayak place, we went downtown to be sure everyone was able to experience the seals and sea lions together. 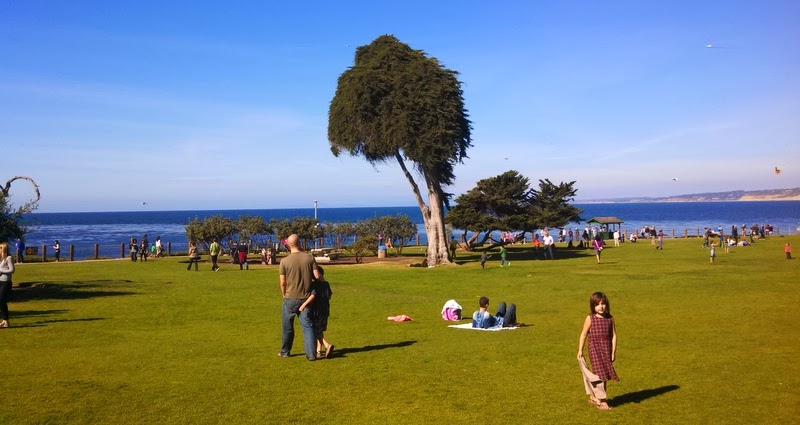 The sky was a perfect shade of blue.  The grass on the park green was neat and soft.  Kites flew high over head of all shapes, sizes, and colors. 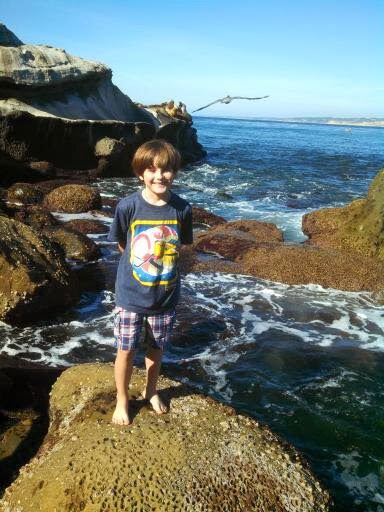 Jonah rushed ahead of everyone to the sea side and kicked off his shoes. 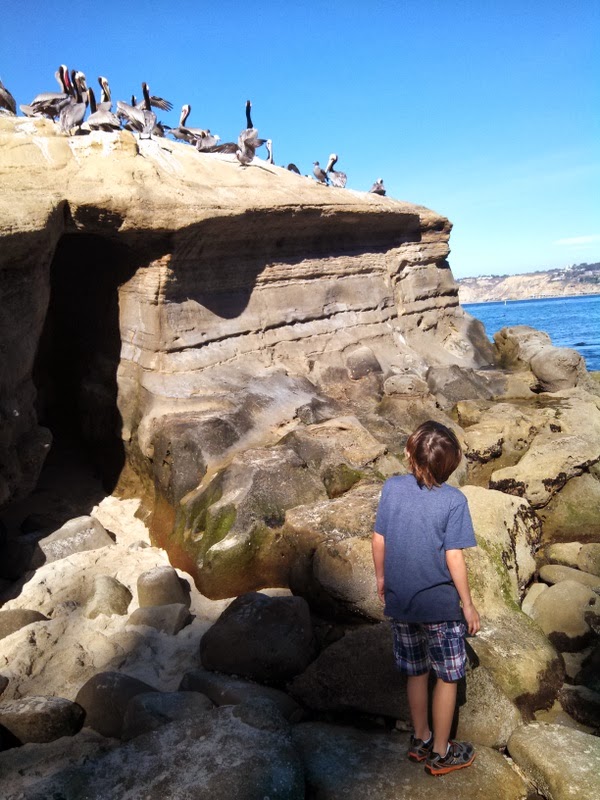 There were hundreds of pelicans perched high above us. 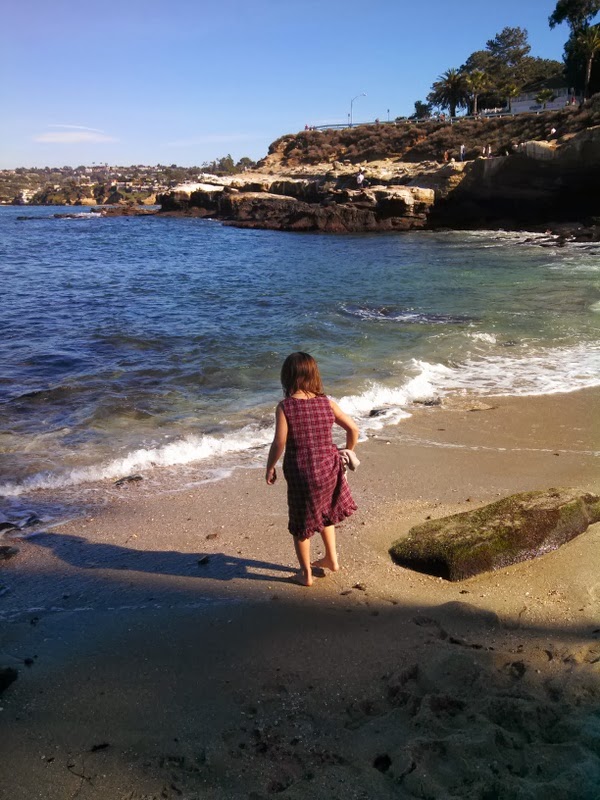 A seal was lounging on a rock only ten feet from our outstretched hands, and a whole family of sea lions lounged just around the corner and through a cave: 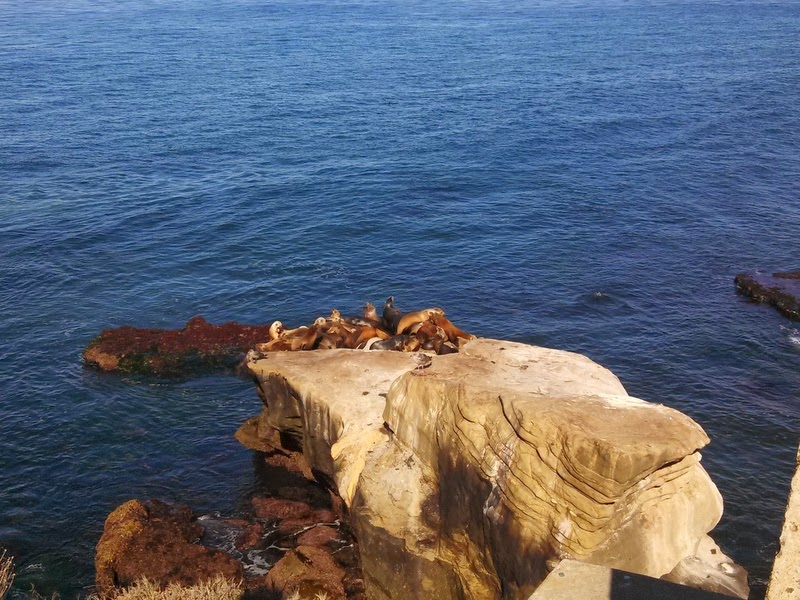 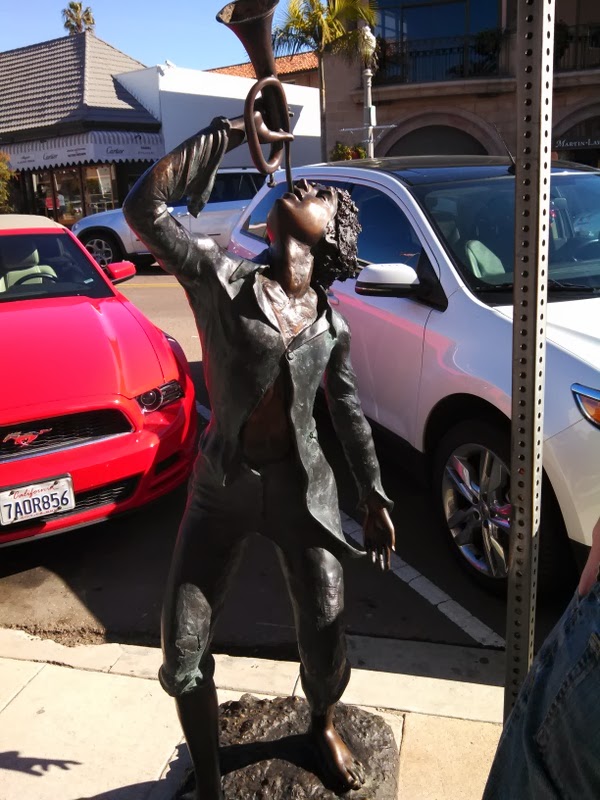 On the way back to the car to register for our ocean kayaking adventure, we saw this neat sculpture, so I grabbed a picture.  There was also a frog with a lily pad made from the same material.

Jonah and I were running a little late, so we skipped lunch.  Michael and Maeryn left us to put on life jackets and helmets and went to get themselves some fries and burgers.

The kayaking adventure was tough.  Jonah and I worked hard to get our two man kayak over the waves and out to sea, then fought wind to keep up with our guide.  We saw several ocean caves, watched two cliff jumpers plummet to the sea, and paddled through a kelp forest stretching eighty feet below.  Jonah reached out to touch the slimy leaves.

We saw a male sea lion trumpeting his song and a few harbor seals frolicking in the waves.

We learned that the U.S. military uses sea lions and dolphins on the coast of California to scout the waters for potential enemy threat.  The animals communicate using flash cards with images and have learned hundreds of human words to help.

On the way back to shore, just outside the kelp forest, a gray whale surfaced and spouted a mere fifty feet from our vessel.  It felt like the Hand of God.

When we arrived back at shore we were covered in salt and sand and freezing (the water temperatures were around 58 degrees F.  Our legs were numb and our knees were locked up.  We stumbled back to the kayak store to deposit our life jackets and helmets and grab changes of clothes and hooded sweatshirts.  Michael mercifully stopped and got us our own burgers and fries on the way home, and shared one of the photos he took during his time with Maeryn.

They went to what is known as The Children's Beach - it has become a breeding ground for seals and sea lions: 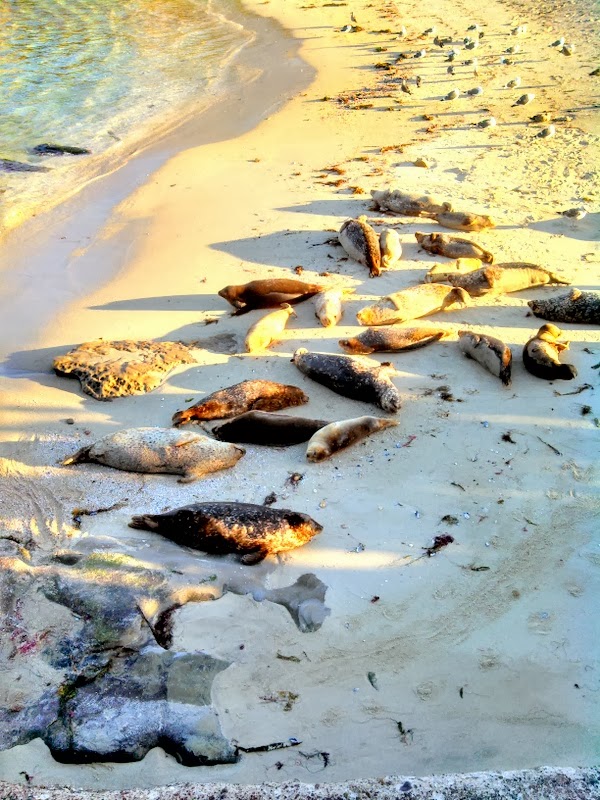 Here they are, basking.

Maeryn found them amusing.  She told me all about how the young ones would poke and prod the older ones and "slap them in the faces while they were trying to sleep".